For her show entitled 'Tutorial', Keren Cytter brings together four recent video works, giving the visitor an insight into various aspects of her film practice, and two series of drawings. Gunther Forg's exhibition consists of 3 large elements: an important series of monotypes, a number of pastel drawings (so-called Dot Images) and a monumental monochrome wall painting. Collector's Room presents new, historical or rarely shown artworks by artists from the gallery's program or from the broader gallery funds. 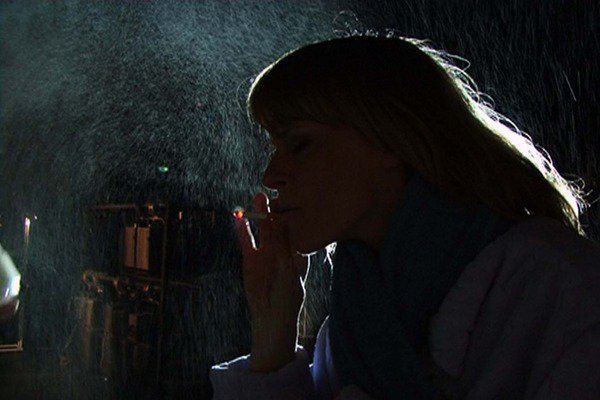 Keren Cytter is a video artist, filmmaker and writer. With her narrative yet radically experimental videos, made quickly and with few resources, which she also writes, films and edits herself, Keren Cytter is now recognized as an artist who has radically innovated and expanded the language of the medium. She bases her predominantly short video works on simple plots, usually well-known or even clichéd personal interactions, around which she writes a script that presents the plot in an entirely deconstructed manner. During the editing, the story is further taken apart (in terms of both audio and video) and pieced back together to form an autonomous video work that breaks with all possible narrative conventions; spoken word, voice-over, subtitles, roles, actors and text are used in a non-hierarchical and asynchronous manner. She further borrows styles, formats, plots, and story elements from both cinema and media culture, and television series. Despite all these conceptual and technical innovations, her work remains readable as a great audio-visual document on our social neuroses and visual culture.

For this first solo show at Deweer Gallery, entitled ‘Tutorial’, Keren Cytter brings together four recent video works, giving the visitor an insight into various aspects of her film practice, and two series of drawings. In ‘Video Art Manual’, a work from 2011 that takes a somewhat special place in her oeuvre, Cytter focuses on how contemporary video art could or should be made. The video reads as an ironical, misleading manual, while ambiguously revealing some artistic preoccupations Cytter deals with in her other video works. In ‘Der Spiegel’ from 2007, Cytter makes use of a ‘choir’ technique – which originated in ancient Greek drama and consists of a live, on-stage comment on the action by a group of choir members - to enhance the narrative potential of a short story and to experiment with the traditional parameters of filmed story-telling. In ‘Der Spiegel’, the choir revolts and takes control over the action, overruling the dominant role of the main actors. For ‘Untitled’, filmed in front of live audiences at the Hebbel Theatre in Berlin and produced for the 2009 Venice Biennial, Cytter was inspired by Cassavetes’ film ‘Opening Night’. She worked with both professional and amateur actors and used several cameras close to the action, causing the viewer to feel submersed in the psychological interactions of the actors. ‘The Hottest Day of the Year’, made in 2010, refers to the tradition of the romantic anthropological documentary. The work of directors Chris Marker and Trinh T. Minh-ha was influential here: in their documentaries, both directors were concerned with colonialism, and intermingled real and fictional elements with philosophical and sociological comments. The drawings in ‘Tutorial’ are a series of preparatory sketches for ‘Untitled’ and a series of four new drawings.

In 2012 Keren Cytter a.o. took part in “Made in Germany II” at the Sprengel Museum and at the Kunstverein Hannover. In 2011 she showed works at the Solomon R. Guggenheim Museum, New York (in “Found in translation”) and at the Moscow Museum of Modern Art, Moscow (in “Expanded Cinema”). Witte de With, Rotterdam presented her work in “Morality” in 2010 and in 2009 she participated at “The Generational: Younger Than Jesus” in The New Museum, New York and at the 53th Venice Biennal.

Günther Förg was born in Füssen, DE, in 1952. He lives and works in Colombier, CH.

Even though he has made important contributions to both architectural photography and sculpture, Günther Förg is primarily recognized worldwide as one of the most important abstract painters of the past 30 years.

Günther Förg paints monochrome or mixed compositions with pure colours, that range from very rigorous, to organized, to more lyrical. Förg paints both on classical carriers such as paper, wood panel, and (prepared) canvas, and on unusual materials such as lead and copper. The painting of Günther Förg is obviously reminiscent of the modernism of the architecture, urbanism, and art that precede him. Günther Förg has succeeded in critically evaluating the aspirations, achievements and shortcomings of modernism and elaborating upon them. Förg masterly showcases the essence of colour, the importance of the gesture that makes the colour sensation possible, the influence and possibilities of the carrier, the various possibilities of the form that develops within a given format, and finally his own creativity and virtuosity, in the way he creates, within these minimal boundaries, aesthetically haunting paintings.

Since the late 90s Günther Förg has used the monotype technique quite often. To make a monotype, the artist uses paint to paint a motive on a sheet of glass, after which he lays a sheet of paper onto the wet paint, to create a contact print. The production process that guarantees an original, unique result, appeals very much to Günther Förg because it allows him both to make a work from the process and to continue to work on the image and the colours afterwards. By working on the glass and by making a print at each and every stage he judges fit, the artist is able to tell the story of the development of the motive (in this case an abstract landscape) and its colours.

Aside from numerous gallery exhibitions worldwide, the most important, recent solo exhibitions of Günther Förg were organized by the Fondation Beyeler (Riehen/Basel, 2009-2010), the Essl Museum (Klosterneuburg/Vienna, 2008), the Langen Foundation (Neuss, 2007) and the Museum für Gegenwartskunst (Basel, 2006). Deweer Gallery introduced Günther Förg in the 1991 group exhibition “To Return to Base” (with Tony Cragg, Jiri Georg Dokoupil, Imi Knoebel and Gerhard Merz) and presented Günther Förg twice with solo shows: in 1995 and in 2000 (exhibitions with catalogue).