In his photographic research, Richard Mosse makes use of a discontinued military surveillance technology. The color infrared film Kodak Aerochrome was originally developed for camouflage detection and registers an invisible spectrum of infrared light. Linn Pedersen's artistic practice includes photography, collage and sculpture as well as video and film. An artist's book is appearing for the exhibition 'O Mundo Dos Cegos', it documents Mauro Cerqueira's continuing observations of everyday life. 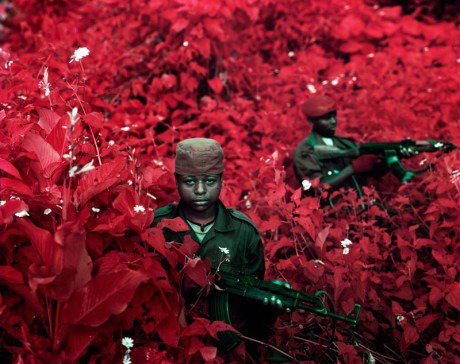 In his photographic research, Richard Mosse makes use of a discontinued military surveillance technology. The color infrared film Kodak Aerochrome was originally developed for camouflage detection and registers an invisible spectrum of infrared light, rendering green landscapes in vivid hues of lavender, crimson, and hot pink. In the late 1960s, the medium was appropriated in the cover art of albums by rock musicians, and trickling into the popular imagination as the palette of psychedelic experience.

On his journeys in eastern Congo, Mosse photographed rebel groups of constantly switching allegiances, fighting nomadically in a jungle war zone plagued by frequent ambushes, massacres, and systematic sexual violence. Mosse discovered a disorienting and ineffable conflict situation, so trenchantly real that it verges on the abstract, at the limits of description. Infra offers a radical rethinking of how to depict a conflict as complex and intractable as that of the ongoing war in the Congo and initiates a dialogue with photography that begins as an intoxicating meditation on a broken documentary genre, but ends as a haunting elegy for a vividly beautiful land touched by unspeakable tragedy.

Linn Pedersen’s artistic practice includes photography, collage and sculpture as well as video and film. Her photographs, in which she combines documentary aspects with poetic elements, show various motifs and material remains of our consumer society, landscapes, architecture, and human figures that turn demonstratively away from the camera.

In her exhibition Floor Arrangements Pedersen combines 15 black and white and colour photographs with sculptures and attempts to create a kind of “sculptural” photography, in which different motifs and materials interrelate. The title is a reference to Bruce Nauman’s work Flour Arrangements (1967), a photographic series for which Nauman created different compositions using flour on his studio floor every day for a month, subsequently taking photos of the arrangements. Reflecting this approach, Pedersen arranged clusters consisting primarily of dried clay, which she sprayed with lively, bright paints, re-arranged them continually over the course of the last six months, and photographing them in detail. Her microscopic perspective opens up new worlds reminiscent of brightly-coloured moon landscapes or flower arrangements. The artist contrasts these abstract clusters with concrete, “figurative” works such as her black and white photographs of stone figures, containers, abandoned vehicles or other objects and constructions found in nature.

Mauro Cerqueira’s method of working is multidisciplinary, encompassing not only photography, video and drawing but also performance, painting and sculpture. One of his preferred formats is printed publication, which enables him to elaborate on content in a narrative way. Cerqueira’s projects in recent years have been inspired by the environment in which he lived and worked in the old city district of Porto where his studio was situated in a building that has been razed meanwhile for redevelopment. In the alleyways of the district he found an inexhaustible repertoire of everyday scenes, people and objects; the residents and architecture of this traditional urban district on the threshold of change were made into the protagonists of his artistic works.

An artist’s book is appearing for the exhibition O Mundo Dos Cegos. It documents Cerqueira’s continuing observations of everyday life and change in the area around the old Rua dos Caldeireiros; in addition to video and photographic works, it forms an integral component of the overall work. Cerqueira’s video pieces are quiet, sensitive portraits of a milieu threatened by suppression and marginalization.

Cerqueira’s approach is shaped by authenticity and a deep bond with his subjects and questions a political and economic system that shuts out specific, traditional ways of life, attempting to banish them from the modern city. Art and life are always indivisible in Cerqueira’s art, and it is this precise characteristic that constitutes his works’ power of expression and compelling urgency.

Mauro Cerqueira, born in 1982, lives and works in Porto. He has already participated in numerous exhibitions throughout Europe.