From the 1970s onwards, Klaus Hahner-Springmuhl was a radical performer who experienced and documented his life as an art process, not on the sunny side of the socialist establishment but with the rebels of his generation. Joris Van de Moortel is concerned with architecture as an important medium of our mental and physical experiences of space. Hyein Lee is a painter whose works represent people, objects and landscapes from the perspective of the passage of time. For his works Aiko Tezuka processed typical woven material found in the shops. Sharon Houkema's artistic work explores the various mechanisms with which the world is perceived and reflected. 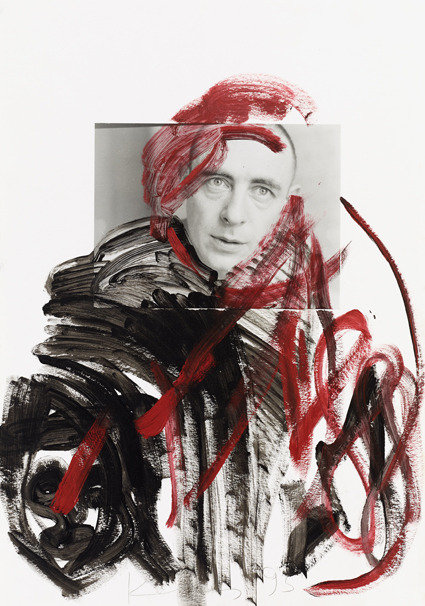 Klaus Hähner-Springmühl (1950 – 2006), was one of East Germany’s most idiosyncratic artists. From the 1970s onwards, he was a radical performer who experienced and documented his life as an art process, not on the sunny side of the socialist establishment but shoulder to shoulder with the rebels of his generation in Karl-Marx-Stadt, Dresden, Leipzig and East Berlin. He did not avoid battles, trying out possible forms and making things happen – as a boxer, an artist and a musician. His expressive pictorial sketches, photographs, abrasive painted-over photos, objects, montages-demontages, actions and free-jazz interventions were astonishing and wonderfully open to risk. He wanted nothing to do with GDR state art. That is why it will always be a mistake to try and incorporate or draw him into that nationalized web of lies. Those who were close to him saw him as a guiding light, although personally, he was suspicious of any claim to leadership, and he could successfully evade any demands on him, as well as the regulating powers. He immersed himself in chaos, fragmenting his surroundings in his own perception; but he remained calm, as if sending out signals from a well-tempered universe.

On 1st February 2013 at 7 pm we will be showing the film Richterstr. 9 by Erich Wolfgang Hartzsch, an active member, alongside Klaus Hähner-Springmühl, of the legendary free-jazz formation “Kartoffelschälmaschine”.
Introduction: Dr. Claus Löser

Joris Van de Moortel is concerned with architecture as an important medium of our mental and physical experiences of space. Besides musical performances, he creates assemblages, which often resemble stage sets or the remains of a performance. For his generally large-scale installation works, Van de Moortel uses pedestals, walls and boxes or a number of things that seem to have been found by chance: towels, musical instruments, door leaves, a single window, or an old cooking pot are combined into unpretentious artefacts, which seem to bear their own, expansive dynamics within them. The artist bundles, ties, screws, and then shuts up his work in wooden or acrylic glass cases, or he has them hang from the ceiling in bin-bags. His environments – often in conjunction with musical performances – are inspired by found situations and often they have no clearly defined beginning, middle or end. Thus, the artist often ‘recycles’ the work at the end of an exhibition by destroying it, and constructing a new work with the help of the resultant junk. In this way, the “undoing” in Van de Moortel’s work becomes an important aspect of the “doing”.

On the opening night of the exhibition, alongside with a tape and record release, the new publication Cylinder #2 by Joris van de Moortel will be presented to the public.
And also: Performance by Joris Van de Moortel (bass, guitar, voice) with Ür gerausch kammerensemble

Hyein Lee is a painter whose works represent people, objects and landscapes from the perspective of the processual and the passage of time.
In the exhibition Sketch Book the artist will be showing new painterly snapshots, a large number of mainly small-format paintings, the motifs of which she tracked down outside – at the interface of city, humanity and nature. They can be divided thematically into three groups of work.
For the first group, last summer Lee went to Planufer at Landwehrkanal daily, at midnight. Due to the darkness, which pushed the technical aspect of painting into a back seat, the paintings tend to be a rather intuitive realization of people’s moods in the summer nights, and of specific smells or memories. Another group of works was produced on the occasion of a journey the artist made in the area around Helmstedt, the former border-crossing point when heading for West Berlin. Here, Lee painted the lake Lappwaldsee, a bathing lake that is slowly forming in a former open-cast lignite mine. Lee’s latest works were produced on the spot in the areas of allotment gardens around Baumschulenweg and Plaenterwald in Berlin-Treptow. By contrast to earlier paintings, which were created in a laborious process in the studio from her memory of the places visited, the new works were produced in a short time but within the context of numerous, repeated visits – for the artist, this has been an important process of adaptation to new surroundings.

Starting out from a realization that the constructs and structures upon which things are based usually remain hidden and what lies on top is always all that is visible to the observer, Aiko Tezuka undertakes to reveal concealed structures in time-consuming manual work – a process that the artist also sees metaphorically with respect to our understanding of the world. Thus, for example, Tezuka unravels and takes apart fabrics, revealing their material structures, transforming the opaque into something transparent.
Ghost – Suspended Organs presents several of the artist’s new, large-format works. For these works, Tezuka processed typical woven material found in the shops: thread by thread, she drew the weft or warp threads, or threads of a specific colour from the meter-long lengths of cloth until they formed a heap on the floor; in one of the works shown, she then created a new piece with the aid of those single threads on an embroidery frame stretched with transparent fabric. In turn, this fetched the innermost onto the outside: realized in embroidery, it shows abstracted organs and circulatory systems of the human body, malformed or deformed by illness.
The artist’s prime interest lies with the process of de- and reconstruction, and the breaking up of customary narrative structures in order to find a new way of contemplating the subjective essence of time and the processes of transformation that start out from it.

Sharon Houkema
Why tidy my exhibition space when the whole world is in a mess?

Sharon Houkema’s artistic work explores the various mechanisms with which the world is perceived and reflected.
In her latest project, the title of which takes up and adapts a Greenpeace slogan, Houkema directs her attention towards the idea of environmentalism and illuminates it from artistic vantage points by focusing on the images and narrative structures that it employs.
For her exhibition project in Künstlerhaus Bethanien, Houkema collected campaign material and corresponding items of clothing from conservational activists, as well as ‘green’, i.e. recycled or in the broadest sense ecologically correct, products from all spheres. She then arranged the stickers, coffee mugs, items of clothing, banners and toys from the past decades and the present day into an exhibition which is reminiscent, as a whole, of a not very tidy but exclusively ecologically furnished home situation. It is likely to raise a wide range of questions for the viewer due to the different, sometimes conflicting messages of these objects grouped by the artist according to purely formal criteria.
As in all her works, the artist is concerned with the question of the perspective from which things are regarded, something that changes according to our own position, and also with the way in which formal conditions – in both a concrete and metaphorical sense – are able to change the meaning of a narrative.