A large-scale pollen field will inhabit the Museum's Donald B. and Catherine C. Marron Atrium, infusing the space with a yellow luminosity. Laib perceives the Marron Atrium as the Museum's inner sanctum, its womb, and has created this work especially for the site. Filmed with two 16mm cameras by Warhol and Paul Morrissey in May 1968, San Diego Surf was the first movie Warhol made in California in the five years since Tarzan and Jane Regained, Sort of... 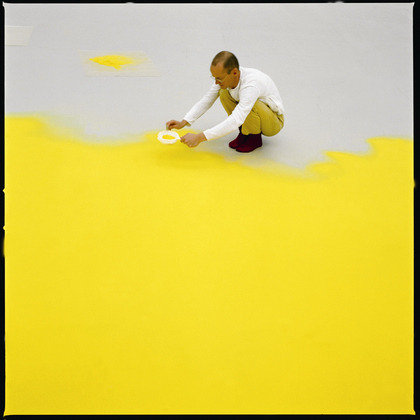 Wolfgang Laib’s Pollen from Hazelnut will inhabit the Museum’s Donald B. and Catherine C. Marron Atrium, infusing the space with a yellow luminosity. Laib perceives the Marron Atrium as the Museum’s inner sanctum, its womb, and has created this work especially for the site. It will be the artist’s largest pollen installation to date, measuring approximately 18 x 21 feet. The hazelnut pollen that will be used in MoMA’s installation has been collected by Laib from the natural environment around his home and studio, in a small village in southern Germany, since the mid-1990s.

Since the mid-1970s, Laib (German, b. 1950) has been producing sculptures and installations marked by a serene presence and a reductive beauty. These works are often made from one or a combination of two materials, accumulated from natural elements—such as milk, marble, pollen, rice, and beeswax—which have been selected for their purity and symbolic associations. Forging a singular path for more than 30 years, Laib amplifies the intrinsic materials and processes found in nature. Laib has stated that “pollen is the potential beginning of the life of the plant. It is as simple, as beautiful, and as complex as this. And of course it has so many meanings. I think everybody who lives knows that pollen is important.”

The installation is organized by Lilian Tone, Assistant Curator, and Ann Temkin, The Marie-Josée and Henry Kravis Chief Curator of Painting and Sculpture.

A Conversation with Wolfgang Laib and Agnes Gund

In conjunction with MoMA's presentation of Wolfgang Laib's Pollen from Hazelnut, Agnes Gund, President Emerita of The Museum of Modern Art, joins the artist in conversation about the installation and his creative process. Ann Temkin, The Marie-Josée and Henry Kravis Chief Curator of Painting and Sculpture, moderates.

Artists Experiment is a new initiative in the Department of Education that brings together contemporary artists in dialogue with MoMA educators to conceptualize ideas for developing innovative and experimental public interactions.

For our inaugural season, we have invited four creative minds to work with our staff for the winter–spring 2013 season. Artists include Raúl Cárdenas Osuna, founder and director of Torolab, a collective workshop and laboratory of contextual studies and research based in Tijuana, Mexico; Kenneth Goldsmith, author, poet and founding editor of the online archive UbuWeb; Xaviera Simmons, artist whose practice includes installations, sculptures, photographic, audio, and performative works; and Caroline Woolard, artist, activist and cofounder of OurGoods.org and Trade Schoolcoop, two barter economies for cultural producers.

In collaboration with Chef Lynn Bound and Cafe 2, please join us for a special dinner event to celebrate the launch of Artists Experiment.

The theme for this event, Capital Exchange, reflects a thread that is present in each of the participating artists’ ongoing experiments: an exploration of different notions of “capital,” ranging from the social and political to the cultural and historical. This event explores these ideas through a multisensory experience including sound, food, readings, and more.

Join us to dine, drink, and learn more about exciting the events coming up at MoMA this season.

Caroline Woolard will open the evening with a reflection on artist Eva Zeisel, the first woman to be commissioned by MoMA to create a limited edition of functional work for sale. Using the placebo as a symbol of value, guests will share in a collective experience with a special performance by singer Heather Christhian.

Drawing from her research in The MoMA library and archives, Xaviera Simmons will share a selection of her initial findings by presenting each guest with a special set of placemats - one for each course throughout the evening - as well as provide the evenings protest inspired soundtrack for the duration of the meal. The evening will end with a special performance by Xaviera and guest performers, including singer Teresa Mora.

Andy Warhol’s San Diego Surf concerns an unhappily married couple (Taylor Mead and Viva), new parents who rent their beach house to a group of surfers. Filmed with two 16mm cameras by Warhol and Paul Morrissey in May 1968, this was the first movie Warhol made in California in the five years since Tarzan and Jane Regained, Sort of…. It was also one of the last films in which the artist had direct involvement; in June 1968, Warhol was shot by Valerie Solanas, after which his work behind the movie camera came largely to an end. San Diego Surf was only partially edited and never released. In 1995, The Andy Warhol Foundation for the Visual Arts, Inc. commissioned Morrissey to complete the editing, based on existing notes and the rough cut. San Diego Surf is a significant addition to an epic oeuvre. Restored by The Andy Warhol Foundation and released by The Andy Warhol Museum as part of the museum’s larger mission of promoting and safeguarding Andy Warhol’s legacy. Organized by Rajendra Roy, The Celeste Bartos Chief Curator of Film.