Eros Sleeping will be shown with 46 related works of art in various media, ranging in date from the fifth century B.C. to the 17th century A.D., drawn primarily from the Museum's permanent collection. Two works from private collections will also be shown. 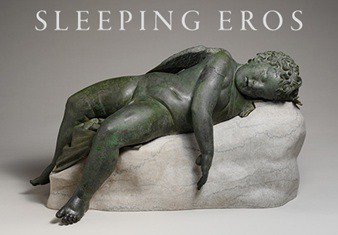 In Greek mythology, Eros was the god of love. He was capable of overpowering the minds of all gods and all men. Literary sources of the sixth and fifth centuries B.C. portrayed him as a powerful, often cruel, capricious being, and in classical Greek art Eros was usually represented as a winged youth. A radically different visual image of Eros—as a charming, winged child asleep on a rock—was introduced centuries later by Hellenistic artists. The Metropolitan Museum of Art’s statue of Eros Sleeping—one of the finest of the surviving bronze statues from classical antiquity—will be the focus of the special exhibition Sleeping Eros, opening January 29, 2013.

The exhibition is made possible by The Vlachos Family Fund.

Eros Sleeping will be shown with 46 related works of art in various media, ranging in date from the fifth century B.C. to the 17th century A.D., drawn primarily from the Museum’s permanent collection. Two works from private collections will also be shown.

Through these examples, the exhibition will examine the cult and image of Eros before and after the Sleeping Eros statue type, show the breadth of its influence, and trace the wide dispersal of the type in Roman times and its subsequent rediscovery during the Renaissance. The exhibition will also consider the original function and context of the sculpture, how the statue was made, and the issue of originals and copies in Greek and Roman sculpture.

The Sleeping Eros was among the earliest types of ancient sculpture to be rediscovered during the Italian Renaissance, and it was the subject of numerous figural studies by Renaissance and Baroque artists in Italy—including Michelangelo, among many others—who were looking to the classical tradition for training and inspiration. Some works were close likenesses, such as the fine Drawing of a Sleeping Eros after an antique sculpture by Giovanni Angelo Canini (1617–1666), which will be shown in the exhibition. Other, less literal, adaptations will also be displayed.

In 1943, when the Metropolitan Museum acquired its statue of Eros Sleeping, it was believed to be an original Hellenistic sculpture or a very close replica created between 250 and 150 B.C. Subsequently, some scholars have suggested that it is a very fine Roman copy of one of the most popular sculptures ever made in Roman Imperial times. Recent research—to be presented in the exhibition—supports the former identification, but also makes apparent that it was restored in antiquity—most likely in the Early Imperial period.

Details of the research will also be published in an upcoming article in the Metropolitan Museum’s annual Journal.

A public lecture by the curator on Friday, April 5, 2013, and gallery talks will be offered in conjunction with the exhibition.

Additional information about the exhibition and its accompanying programs can be found on the Museum’s website at www.metmuseum.org.

The exhibition is organized by Seán Hemingway, Curator, Department of Greek and Roman Art. Exhibition design is by Michael Batista, Exhibition Design Manager; lighting is by Clint Ross Coller and Richard Lichte, Lighting Design Managers; graphics are by Mortimer Lebigre, Associate Graphic Designer, all of the Museum’s Design Department.