Silence presents an extraordinary range of artistic practice, including works by Marcel Duchamp, Nam June Paik, Theresa Hak Kyung Cha, Doris Salcedo. As the works in the galleries and theater attest, silence has been a means for the avant-garde both to reach into new aesthetic territory and to discover fresh ways of giving form to the intangible. 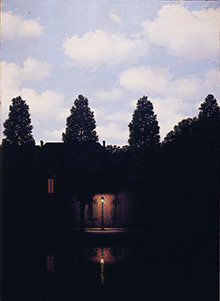 What is silence? Can we possibly hear silence, see nothingness, experience anything outside the continuum of time? John Cage famously asserted that there is no such thing as silence or empty space or empty time: “There is always something to see, something to hear.” Inspired by Cage’s groundbreaking 1952 musical composition 4’33” and the one-hundredth anniversary of the composer’s birth, Silence considers the absence of sound as both subject and medium in modern and contemporary art and film. Stretching over a century of innovation and experimentation, Silence presents an extraordinary range of artistic practice, including works by Marcel Duchamp, Nam June Paik, Theresa Hak Kyung Cha, and Doris Salcedo. As the works in the galleries and theater attest, silence has been a means for the avant-garde both to reach into new aesthetic territory and to discover fresh ways of giving form to the intangible.

Iconic early twentieth-century Surrealist paintings by Giorgio de Chirico and René Magritte, marked by stillness, explore inaudible realms of the unconscious. Robert Rauschenberg’s White Painting (Two Panel) (1951), from the series that inspired Cage’s 4’33”, embodies the essence of absence in its attempt to erase representation, symbolism, and any trace of the artist. Christian Marclay created a new series of works for the exhibition inspired by, and displayed with, silkscreen paintings from Andy Warhol’s Electric Chair series of the 1960s, focusing on the sign reading SILENCE in the background of many of the Warhol paintings. Marclay’s works, along with One Year Performance by Tehching Hsieh and Philip Gröning’s film Into Great Silence, address the theme of imposed silence. Tino Sehgal’s work in the exhibition, consisting of one dancer slowly writhing on the gallery floor, reminds us of the essential isolation of human existence.

In the film component of the exhibition, Sounds of Silence, presented in the PFA Theater, we see how filmmakers in the era of sound have employed literal or symbolic silence and variants of quiet for artistic, spiritual, or narrative purposes. Avant-garde filmmakers such as Maya Deren, Stan Brakhage, and Nathaniel Dorsky explore the aesthetic use of silence in the program A Kind of Hush, while in Sourcing Sound Stephen Vitiello, Rudy Lemcke, Robert Russett, Semiconductor, and other experimental filmmakers unite sound and image in unexpected and subversive ways. Silence as a cultural construct surfaces in several feature films: Bergman’s masterful The Silence describes the terrible quiet left behind by God’s absence, Pat Collins’s wind-swept Silence follows an audio recordist as he reconnects with the source of sound, and Philip Gröning’s reverential Into Great Silence closely portrays the muted days of an alpine monastery of silent monks. Philosophical, fundamental, or just faint, silence is beauty in the ear of the beholder.

Whether explored as a symbol, a memorial device, an oppressive force, or as something to be inhabited through performance, silence remains elusive, mysterious, and powerful.