A Space Called Public / Hoffentlich Offentlich. 12 international artists invited to generate a new conversation about the concept of public space today, using a variety of approaches at various locations in the city. 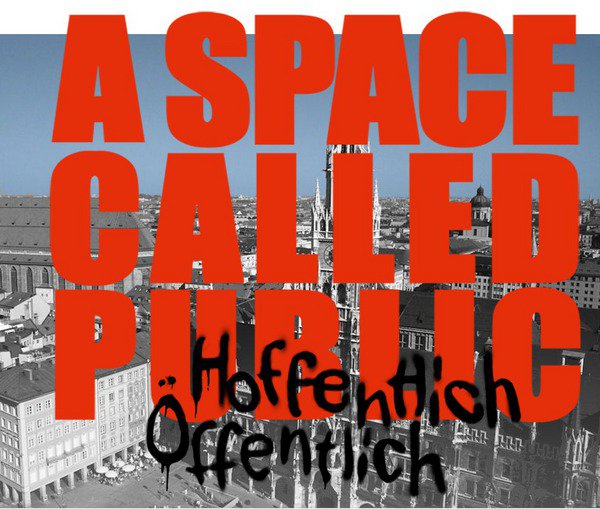 At the invitation of the City of Munich, the artistic team of Elmgreen & Dragset will act as curators of a wide-ranging temporary art project to take place in the centre of Munich between January and September 2013.

Under the title A Space Called Public / Hoffentlich Öffentlich, the artists wish to generate a new conversation about the concept of public space today. A total of 12 international artists were invited to address the issue, using a variety of approaches at various locations in the city. The project, an unusual one for Munich and one as yet unique in this form, is accompanied by a desire to initiate reflection and discussion of a topic which affects us all.

Like many other major European cities, Munich is confronted with the need to readdress the question of the significance and value of public space as the significance of the public sphere undergoes a potentially fundamental shift. Under the impact of the Internet and social media, aspects which once distinguished the function of public space – its function as a place of assembly, a place for exchanging ideas and a forum for urban society – are now increasingly moving into the virtual realm.

Taking this technological and, by extension, social shift as their starting-point, Elmgreen & Dragset will make use of A Space Called Public to formulate questions concerning the redefinition of public space. Will public spaces in major cities – particularly those in city centres – be reduced in the near future to intensively commercialised havens of consumption or mere points where tourists converge? How does Munich seek to define itself through its public spaces? What is the city's identity? And what will result from this profiling of Munich, in the context of other major cities that are its economic and cultural rivals?

The choice of title alone is a clear indication that the interests of Elmgreen & Dragset are focused on investigation. The project is not concerned with defining "public" or "space" but, instead, probes into meanings and interactions using the tools offered by contemporary art. Curators Elmgreen & Dragset decided to develop the project in various phases in public spaces in Munich's city centre. Its open structure is designed to take place over a long period, creating space for curiosity, discovery and its titular "hope" of establishing a burgeoning dialogue in and with the public as the individual artistic strands grow together.

The installations and happenings of the art project A Space Called Public will become visible in Munich's public spaces from January 2013. The project will be launched with the unveiling of a replica of the empty Fourth Plinth from London's Trafalgar Square on Wittelsbacherplatz in Munich, a work by by Stephen Hall (born 1968 in Dublin, Ireland, lives and works in London) and Li Li Ren. Like its famous original in England, the work 4th Plinth Munich will include an invitation to five international artists to submit works for temporary display on the plinth; the winner will be chosen by a jury and presented in the summer of 2013.

Almost directly in the vicinity, the following performance It's Never Too Late To Say Sorry by Elmgreen & Dragset will take place from 12 March on Munich's Odeonsplatz. Daily at 12 noon, a performer will take a megaphone out of a fixed glass case and announce, "It's never too late to say sorry!" The choice of Odeonsplatz as the location, with its historical resonance as a central stage of the National Socialist movement in Munich, was deliberately intended to add an unambiguously political slant to the statement.

Words become music, recitative soundscapes blend with orchestrated metaphysics in the collaboration between Icelandic musician and performance artist Ragnar Kjartansson (born 1976 in Reykjavík) and the Munich Philharmonic Orchestra. The first performance will take place in one of Munich's city- centre green spaces.

The work Berliner Pfütze (Berlin Puddle) by Kirsten Pieroth (born 1970 in Offenbach, lives and works in Berlin) belies its first impression as a natural interaction of local rainwater and concrete. The sculpture is composed of a puddle of water collected in Berlin which is 'installed' at various locations in Munich. The issue of the interchangeability of a city's identity thus coalesces into a commentary on the daily, often absurd, substitution of countless products in our globalised lives and consumer environments.

The Time Capsule 2013-2113 will be filled with testimonials from the here and now, notes on personal life and experience of the city, documents or wishes for Munich 100 years from now. The public collection point of the young Colombian artist Ivan Argote (born 1983, lives and works in Paris) will address issues of bourgeois participation, the historicity of a city and its fitness for the future. A multimedia communication campaign will accompany this project – a 'monumental' undertaking in a very specific sense, with its grassroots impetus and request to the city to stage an exhibition of the contents of the Time Capsule in 2113.

Danish concept artist Henrik Olesen (born 1967 in Esbjerg, lives and works in Berlin) has created an homage to German film director Rainer Werner Fassbinder that casts a new perspective on the work of a figure as brilliant as he was controversial, whose life ended all too soon in Munich in 1982. The lack of Asian traditions in the Munich cityscape is the focus of Han Chong (born 1979 in Malaysia, lives and works in London) and his work Made in Dresden. Chong positions an overturned golden Buddha statue at the Viktualienmarkt, a location dominated by local culture that provides only a distorted reflection of globalized economic systems and employment markets.

METRO-Net is part of the body of work known as "unsinnige Bauvorhaben" ("psychobuildings") produced by Martin Kippenberger in the last four years before his death in 1997. The legendary installation will be displayed at Marienhof in Munich, linking the global transport and communication networks of the artist's imagination to local debate over Munich's second rapid transit train route.

A Space Called Public also provides Peter Weibel, a further legend of Germany's arts scene, with the opportunity to resume the role of artist after occupying the roles of prestigious curator, media theorist and director of the Karlsruhe Centre of Art and Media Technology (ZKM).

Off-the-wall perspectives and insights into the depths of human nature, all garnished with a touch of British humour, are the focus of drawings, texts and sculptures by David Shrigley (born 1958 in Macclesfield), which will have their Munich premiere as part of A Space Called Public. Collaborations with students from Munich's Fine Arts Academy, schools and other institutions in Munich are also planned.

The opening ceremony of A Space Called Public will be held on 6 June 2013 in the Rathausgalerie (City Hall Gallery of Munich), which will serve throughout the project as a multiple exhibition space and a tourist and information office.

In parallel, from mid-June a multi-phase interdisciplinary programme of supplementary events will take place at various locations in Munich and provide a range of perspectives on the project. All projects will be realized and visible in the city from June to the end of September. After this time A Space Called Public will be removed, thus vanishing completely from the cityscape.

The closing event of A Space Called Public at the end of September will include the presentation of an extensive catalogue serving to document and localize current debate over public space and art and the public sphere.

Information about the project will be available from January 2013 at www.aspacecalledpublic.de A SPACE CALLED PUBLIC / Hoffentlich Öffentlich by Elmgreen & Dragset is an artistic project in public space funded by the City of Munich.