thurs-sun 2pm-7pm, or by appointment

The training. With an economy of means, the artist directs our eyesight towards different landscapes by isolating each of their intrinsic elements to trace the life out. 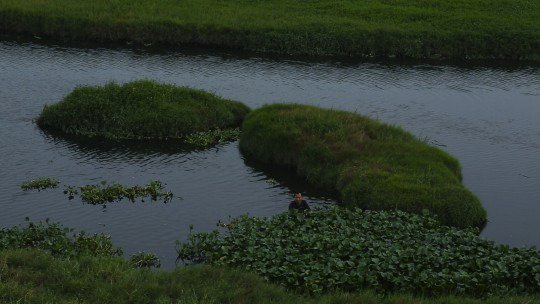 Since November 2012, Kadist artist-in-residence, Zhou Tao (b.1976) has been working on his new film, After Reality, which will be presented in conjunction with Collector (2012).

Both works result from a state of vigilance sought by the artist. With an economy of means, Zhou Tao directs our eyesight towards different landscapes by isolating each of their intrinsic elements to trace the life out. It will take chance and precision to detect new forms of relations between things, people and places, unveiled by the film’s editing.

In that sense one could quote Robert Bresson for whom "to create is not to deform or invent persons or things. It is to tie new relationships between persons and things which are and as they are." Rather than "making"a film, Zhou Tao declares that he "looks for it", through various places, architectures, people or communities, as their gradually catch his sight.

For After Reality some images were shot in Guangzhou (China) and others in Paris in abandoned, urban or rural surroundings, in transitional areas, roadside edges or railway banks, all of them similar to what French landscape gardener, Gilles Clément, refers to as the "Third Landscape". Thanks to a precise editing in alternating images that were shot in Paris and Guangzhou, Zhou Tao uses the film to create a third space. His gaze rests as much on the biodiversity of these escheated areas, as on the performing body that acts, digs, pulls things, trains… In this way the artist shows us a survival community that has escaped all urban planning project. The exploration of marginal spaces produced by our society allows to develop alternatives to their way of functioning and to the space we occupy in them.