Communications Department of the Metropolitan Museum of Art

Birds in the Art of Japan

This exhibition presents approximately 150 works in various media from medieval times to the present. Displays of paintings will be juxtaposed with examples of modern and contemporary textiles, ceramics, lacquerware, and bamboo art. 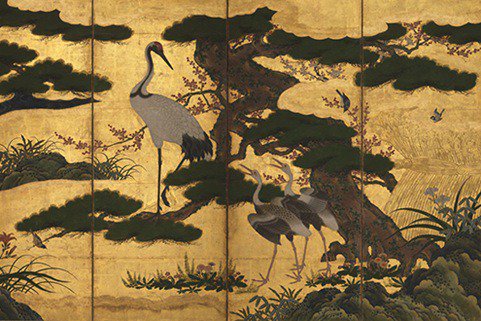 organized by John T. Carpenter, Curator of Japanese art in the Department of Asian Art at The Metropolitan Museum of Art, with the assistance of Sinead Kehoe, Assistant Curator.

“It was evening all afternoon. It was snowing And it was going to snow. The blackbird sat In the cedar-limb.” From Thirteen Ways of Looking at a Blackbird by Wallace Stevens

Showcasing some 150 works in various media from medieval times to the present, the exhibition Birds in the Art of Japan at The Metropolitan Museum of Art will explore how Japanese artists have depicted bird species of every variety—from monochromatic ravens, crows, and mynah birds to colorful peacocks, long-tailed cocks, and magpies. Highlights of the exhibition, which opens February 2, 2013, include such masterpieces as a pair of screens depicting a flock of mynah birds and four enormous paintings of birds of prey by Kawanabe Kyōsai (1831–1889). Among the contemporary works in the exhibition will be graphically potent black-and-white photographs from the celebrated Solitude of Ravens series by the late Fukase Masahisa (1934–2012). Displays of paintings will be juxtaposed with examples of modern and contemporary textiles, ceramics, lacquerware, and bamboo art. Drawn mostly from the Metropolitan’s own collection, including important recent acquisitions, the exhibition also presents some 15 objects from private collections—several of these loans will be displayed publicly in this exhibition for the first time.

The exhibition is made possible by The Miriam and Ira D. Wallach Foundation.

“Inspiration for the exhibition comes from traditional Japanese court poetry and haiku as well as a famous poem by Wallace Stevens,” said John Carpenter, Curator of Japanese Art in the Metropolitan Museum’s Department of Asian Art. “Stevens’s Thirteen Ways of Looking at a Blackbird comprises 13 haiku-like stanzas and alludes to various moods associated with viewing blackbirds. Several of the stanzas can be considered to evoke emotions comparable to a superb set of Kyōsai album paintings of crows and other birds, 13 of which will be included in this exhibition.”

Japanese artists from the earliest times have depicted birds—real and fanciful—often with literary, religious, or auspicious connotations drawn from Chinese precedents. Screen and sliding-door paintings with bird-and-flower themes, in both ink and brilliant colors, were created frequently for ancient palaces or temple settings and have remained popular with artists of every school through the Edo period (1615–1868).

The exhibition is organized roughly by type of bird. The opening gallery will focus on the poetic associations and auspicious symbolism of cranes in East Asian art as a symbol of long life, and as the frequent companion of Daoist immortals. Highlights of the section are a dramatic set of screens by Ishida Yūtei (1721–1786), with a flock of cranes in various poses, and a tour-de-force example of contemporary bamboo sculpture by Honma Hideaki (b. 1959) called Flight, which captures the aerodynamic elegance and sense of liberation of a soaring bird.

The next section will begin with medieval ink paintings, such as hanging scrolls with meticulous depictions of waterfowl, and the 17th-century gold-leaf screen with an autumnal scene of ripe millet and a flock of small birds. These views of birds in serene settings will contrast with the works that follow—a quartet of dramatically scaled paintings by Kawanabe Kyōsai showing eagles attacking various types of prey, like monkeys, rabbits, and squirrels. A monumental iron sculpture of an eagle with an almost five-foot wing span will represent the accomplishments of late 19th-century metalworkers. A rare hammered-iron raven, signed by the early 18th-century master swordmaker and metalsmith Myōchin Munesuke (1642–1735?), will also be on view.

One of the centerpieces of the exhibition will be a pair of early-17th-century screens depicting a flock of more than 120 mynah birds in flight or strutting on the shore. Expertly rendered exclusively in ink, the artist created clusters of birds in dynamic interaction, with expressive eyes suggesting humanlike interaction. The political significance of mynah birds as defying corrupt political power might have been the motive behind this composition, which was created at precisely the time the Tokugawa warlords were usurping the power of the palace and the ancient capital of Kyoto.

Gorgeous textiles of the 18th to 20th century, including both Buddhist vestments and luxurious women’s kimonos with embroidered decoration that incorporates fanciful bird motifs, will be rotated into the exhibition about halfway through its showing. Rare and unusual examples of ceramic sculptures of birds will be on display with colorful porcelain dishes of the 17th to 19th century decorated with avian motifs. Works by the contemporary potter Takegoshi Jun (born 1948)—known for his designs of rare or extinct birds—round out this display.

A gallery will also be devoted to a dazzling array of ukiyo-e prints and illustrated books, including an unprecedented display of early-19th-century surimono (privately commissioned deluxe prints) from the “Spring Rain” albums compiled in 1889 by Paris-based dealer and collector Hayashi Tadamasa.

Exhibition tours and a How Did They Do That? weekend program for all ages will be offered in conjunction with the exhibition.