Bacher presents an installation with sculptural pieces made over the past years, on show for the first time. The installation is a giant chessboard, laid out in checkered sets on the floor. Curated by Sophie von Olfers. 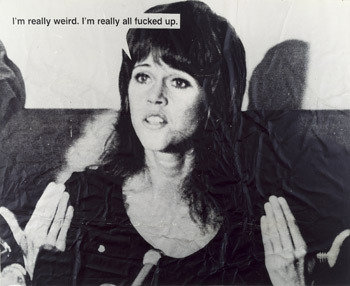 Lutz Bacher's exhibition at Portikus is the first in a series of three solo shows this year, presenting Bacher's work to a European audience in the most encompassing way to date. Following the project in Frankfurt, the artist will present exhibitions at the Institute of Contemporary Arts (ICA), London, and Kunsthalle Zürich in the fall and winter of 2013. The three institutions will co-publish an extensive publication on the artist's longstanding practice and all-embracing oeuvre.

Lutz Bacher, who lives between Berkeley and New York City, occupies an important position in contemporary artistic practice. As an artist whose age and gender have been occluded for over four decades, her work becomes as much a refuge as a vehicle to respond liberally to the urgency of political and social conditions, especially in her native America. While the imagery, objects and physical spaces Lutz Bacher creates are informed by studies of ignorant and oftentimes violent human conduct such as physical abuse, treason, and complacency, she manages to escape any sort of unilateral categorization.

For the main exhibition space at Portikus, Lutz Bacher presents an installation with sculptural pieces made over the past years, on show for the first time. The installation is a giant chessboard, laid out in checkered sets on the floor. Bacher's chess pieces are not the usual white and black players, but figures that range from Elvis to a Tyrannosaurus Rex to a replica of Marcel Duchamp's bicycle wheel. It comments on the structurally complex nature of certain microcosms (such as the art world) in the much larger context and endless variations of the universe. Lutz Bacher cautiously exposes her own interest in belief systems such as fate, serendipity, and universal interconnectivity. By pointing towards the mechanisms inherent in a game of chess, she invites us to strategize about the complex correlations between conditions, persons, and objects.

The temporary upper floor at Portikus as well as the monumental window space in the attic extend the exhibition's modular, rhythmic leaps from white to black throughout the building. While the chessboard is set in a classic white cube, the multichannel video piece Blue Moon (1996), which is shown upstairs, is presented in a room filled with sparkling black sand. The attic window in turn becomes a black-and-white billboard that emanates one of Lutz Bacher's trademarks, the "duck/bunny," into the public realm of the city. The drawing—depending on how you look at it—can be a duck's head or a rabbit's head, and was used by philosopher Ludwig Wittgenstein to visualize his cognitive and behavioral theory. Lutz Bacher grants us the investigation into what we actually see when we look at art, how we process the seen, and what we eventually convert it into.

Lutz Bacher is making an artist edition for Portikus, which will be available during the run of the exhibition.

The exhibition was made possible with the generous support of Hessische Kulturstiftung.