Around fifty years after the emergence of video art, Move on Asia. Video Art in Asia 2002 to 2012 provides insights into the most recent developments of this medium in the Asian region. Du Zhenjun is considered an extraordinary artist. In his series of large-format, digitally prepared photographs, he shows, by way of Babylonian Architectures, a world impacted by turbo- capitalism and globalization. 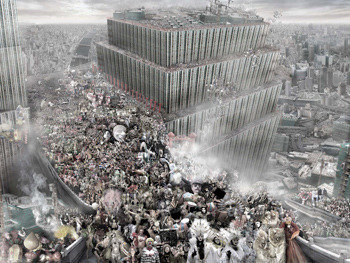 The “Discovery of a new continent of art” (Peter Weibel) was already an object of the exhibition at the ZKM | Karlsruhe in 2007 curated by Wonil Rhee entitled “Thermocline of Art. New Asian Waves”. The large-scale show on the newest tendencies in the Asian art scene prompted huge international attention. The rapid development in the sphere of the Asiatic “moving image” required a continuation and presentation of this theme already after six years. Under the multi-layered title “Move on Asia. Video Art in Asia 2002 to 2012”, the ZKM shows the development of precisely this genre, and points to the increasing significance of Asia in global contemporary art.

An atmosphere of upheaval is perceptible throughout present-day Asia, which finds expression in a new discourse on contemporary Asiatic art that transgresses all genres. It is not the adherence and conservation of past values, but the recovery, creation, integration and transformation which constitute the guidelines under which the new Asiatic art liberates itself from the western models and achieves an increasingly greater independence. Until the turn of the century, as an art genre the video continued to be attributed to the western hemisphere – and in spite of the fact that its most important representatives were from Asia; over the last two decades, however, independent video cultures have evolved that have found a global public last but not least at flourishing biennales and art exhibitions throughout the Asian continent. The selection of works that make up “Move on Asia” draws on the large-scale festival of moving digital pictures in Asia of the same name organized by a network of 20 curators and 40 video artists since 2004. The exhibition which cooperates with Alternative Space LOOP in Seoul (Korea) presents video art from China, Hong Kong, India, Indonesia, Japan, Korea, Pakistan, the Philippines, Singapore, Sri Lanka, Taiwan, Thailand and Vietnam. In addition to recognized artists, recent works by the young generation are also on show.

An interactive installation entitled “Global Fire” by the Paris-based artist Du Zhenjun may also be viewed in connection with the exhibition: a huge inflatable dome in which the visitors may ignite the flags of 200 countries with lighters on heat censors. Also on show in the ZKM_PanoramaLab the interactive video installation “40+4. Art is Not Enough! Not Enough”, resulted from the collaboration between the curator Davide Quadrio, the filmmaker Lothar Spree as well as the video artist Xiaowen Zhu.

Since the beginning of the 1990s the Shanghai-born and Paris-based artist Du Zhenjun has drawn attention, by way of his interactive works, to the individual as well as social conditions of a world influenced by turbo capitalism and globalization.
In the exhibition “Du Zhenjun. Babel-world” at the ZKM | Karlsruhe, his large-scale work series BABEL, composed of photographic work, demonstrates that turning the world into new Towers of Babel, he presents a contemporary version of the apokalypse: barely having the new tower-symbols of newly gained wealth and superpower been built, than they are already on fire and the earth is flooded. "The majestic Towers of Babel as originating in Du Zhenjun's imagination arise, as it were, like an annoucement of the events to come: horror in all its beauty" (Sacha Goldman)