Presenting a selection of 180 paintings, collages, and sculptures, as well as relevant examples of illustrated books and documents, the exhibition will assemble works related to all of the artist's periods, discoveries, and techniques, thereby introducing his life and oeuvre within a both biographic and historical context. 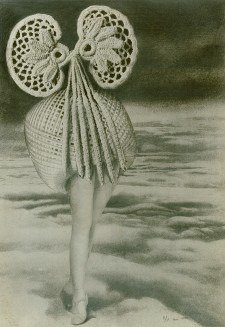 “Before he descends, a diver never knows what he will bring back up.” (Max Ernst)

The Albertina will devote an exhibition - his first retrospective in Austria - to Max Ernst, the great pictorial inventor. Presenting a selection of 180 paintings, collages, and sculptures, as well as relevant examples of illustrated books and documents, the exhibition will assemble works related to all of the artist’s periods, discoveries, and techniques, thereby introducing his life and œuvre within a both biographic and historical context.

Together with Matisse, Picasso, Beckmann, Kandinsky, and Warhol, Max Ernst no doubt numbers among the leading figures of 20th-century art history. An early protagonist of Dadaism, a pioneer of Surrealism, and the inventor of such sophisticated techniques as collage, frottage, grattage, decalcomania, and oscillation, he withdraws his work from catchy definition. His inventiveness when it comes to handling pictorial and inspirational techniques, the breaks between his countless work phases, and his switching back and forth between themes cause irritation. Yet what remains a constant is his consistence in terms of contradiction.

Max Ernst was a restless personality who always strove for freedom. Torn between the realization of his personal aims in life and the social and political obstacles during a turbulent period, he nevertheless always looked ahead: a “flight into the future”. A misunderstood and revolting artist, he had moved from Cologne to Paris in 1922, where he joined the circle of the Surrealists; he was detained as hostile alien twice, attempted to get away, and was released thanks to lucky “coincidences”. In 1941 he escaped into American exile.

Remembrance, discovery, recycling, and collage were the combined motor that drove him in his work. Under these aspects, the exhibition positions Max Ernst’s œuvre between references to the past, contemporary political events, and a prophetic and visionary perspective of the future. He who attested to himself a “virginity complex” in the face of empty canvases went always in search of means that would allow him to augment the hallucinatory capacities of his mind, so that visions would arise automatically in order to “rid him of his blindness”.

This exhibition is being compiled in collaboration with the Fondation Beyeler.
Guest curators: Werner Spies and Julia Drost