wed-sat- 11-6pm and by appointment 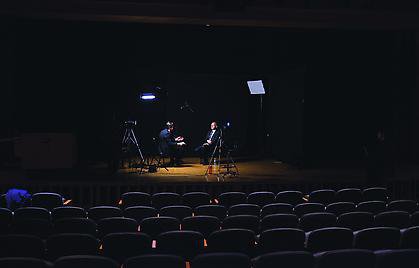 Using three video cameras, Schatz recorded his interviews with 89 policy makers and cultural operatives to create “The Network,” a digital conversation which was recently acquired by The National Portrait Gallery. Drawing inspiration from Richard Avedon’s political portrait photographs, Schatz updates an art historical continuum that began with Raphael’s sixteenth-century painting of Baldassare Castiglione as an eloquent embodiment of the Urbino court.

After translating the raw video footage into analog format, the artist wrote digital code that accesses metatagged topics in all 89 interviews so as to present constantly changing sequences of sitters and concepts.

Transitioning seamlessly from one speaker to another, the work continually generates a provocative nexus of contemporary ideas. In the gallery installation, Schatz brings the original context of these performative conversations to life, creating an immersive experience for his audience, whose personal perspectives will generate new relational meanings of the art.

CONNERSMITH. is pleased to present Benjamin Kelley’s first solo exhibition with the gallery. In this new body of works the artist alters forms and fabricates structures to re-contextualize found objects, including a prison shank and a 1971 Chrysler Newport auto body.

As Kelley deploys the historical and emotional content of his materials in a critique of industrial America, he engages with the theme of violence expressed in Francisco Goya’s 19th-century print series, “Disasters of War.” Kelley’s sculptures evoke the timelessness of still moments immediately preceding or following violent encounters.

As he explains, “When confronted by an inescapable threat, the ancient autonomic system of both humans and animals responds with immobilization. A state of such paralysis transcends evolutionary perspectives leaving evidence in gray.”

CONNERSMITH. is also pleased to present Coble/Riley Projects’ second exhibition with the gallery. Since 2009, Mary Coble (USA/DK) and Blithe Riley (USA) have collaborated on performance-based videos that explore tensions between site-specificity, gesture, narrative, and endurance.

In February 2012, Coble/Riley Projects was invited to participate in a month-long Iaspis Residency in Umeå, Sweden. Working on a frozen stretch of sea, Coble and Riley fused video, performance and land art to create “Watermarks.” Dense snow conceals the frozen seascape underneath, acting as a canvas on which the artists make marks and draw. Opaqueness and transparency arise from the simple actions of an unknown figure, who repeatedly uncovers layers of snow, ice, and water to reveal surfaces with varied properties of reflection.