Friendship of Nations: Polish Shi'ite Showbiz. The exhibition and related public programs cohere around key historical moments in Polish and Iranian modernism, when folk tradition and religious practice give way to the undercurrents of political and social reform. 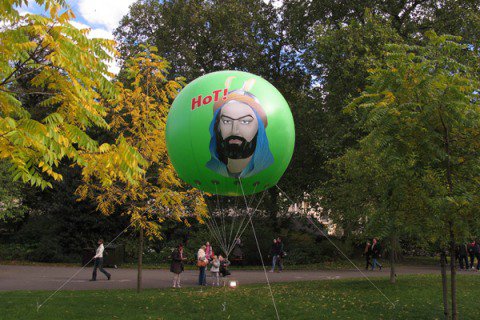 An examination of the unlikely points of convergence in Poland and Iran's economic, social, political, religious, and cultural histories—from seventeenth-century Sarmatism to the twenty-first-century Green Movement—Friendship of Nations: Polish Shi'ite Showbiz addresses how the two countries' respective efforts toward self-determination have shaped the larger geopolitical landscape and punctuated the historical narratives of Communism and Islam. The exhibition at REDCAT and related public programs cohere around key historical moments in Polish and Iranian modernism, when folk tradition and religious practice give way to the undercurrents of political and social reform.

Friendship of Nations represents the outgrowth of research by Slavs and Tatars, an international collective of artists, designers, and writers, into the area commonly referred to as Eurasia, a complex geography the group identities as being "east of the former Berlin Wall and west of the Great Wall of China." As part of an ongoing series of works that employ disparate media and graphic styles to focus on an oft-forgotten sphere of influence between Slavs, Caucasians, and Central Asians, the multiplatform exhibition at REDCAT brings together a selection of recent sculptural objects, embroidered tapestries, and lectures that represent the collective's first exhibition in Los Angeles.

Founded in 2006, Slavs and Tatars has since had solo exhibitions at the Museum of Modern Art, New York; Secession, Vienna; KIOSK, Ghent, Belgium; and Neuer Aachener Kunstverein, Aachen, Germany. They have been included in such notable exhibitions as Sharjah Biennial 10, Sharjah, United Arab Emirates; the 8th Mercosul Biennial, Porto Alegre, Brazil; the 9th Gwangju Biennial, Gwangju, South Korea; and The Ungovernables, New Museum, New York. Recent publications by Slavs and Tatars include Kidnapping Mountains (Book Works, 2009), Love Me, Love Me Not: Changed Names (Onestar Press, 2010), Not Moscow, Not Mecca (Revolver/Secession, 2012), Khhhhhhh (Mousse/Moravia Gallery, 2012), as well as Molla Nasreddin: the magazine that would've, could've, should've (JRP-Ringier, 2011), a translation of the legendary Azeri periodical.

Slavs and Tatars' Friendship of Nations: Polish Shi'ite Showbiz is funded in part with generous support from Étant donnés, the French-American Fund for Contemporary Art, as part of Ceci n'est pas... Art Between France and Los Angeles; and the Consulate of Poland, Los Angeles. Additional support provided by Stefan Simchowitz and the Adam Mickiewicz Institute. The Standard is the official hotel of REDCAT.