Ian Wilson: a permanent solo exhibition that displays different works throughout the years as well as a commissioned and acquired Discussion for the collection. The Peacock: permanent or temporary (new) furniture, design, applied and decorative arts that analyze their own functionality. 'The Members Library' consists of two elements: a library (including a bookstore) and an exhibition space (dedicated to publications). 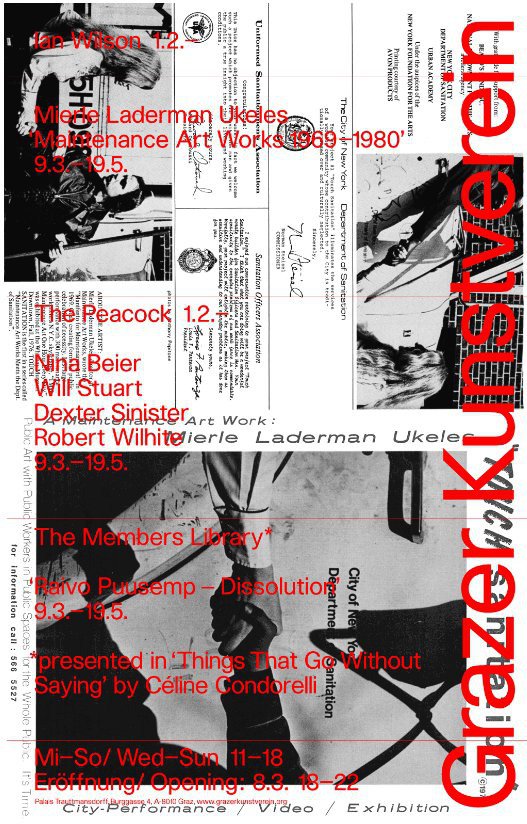 The Grazer Kunstverein and its new artistic director, Krist Gruijthuijsen, are delighted to announce the inauguration of the new program within the Kunstverein's newly renovated and expanded premises.

To start at the beginning: Ian Wilson

Wilson (b. 1940, South Africa) is someone in whose work the Grazer Kunstverein would like to see its mission reflected; to explore relationships between the viewed—or discussed—and the viewer and the topical urgency of such interaction.

Wilson has been exploring spoken language as an art form since 1968. He has described his own work as ‘oral communication’ and later as ‘discussion’. At Wilson’s own request, his work is never filmed or otherwise recorded, thereby preserving the transient nature of the spoken word. Wilson’s earlier artistic explorations took place entirely in the monochrome. He was absorbed by questions relating to perception and painting. His last physical objects, ‘Circle on the Floor’ and ‘Circle on the Wall’, were created in early 1968. By making these works, Wilson realized that it was not necessary to produce an object to visualize a concept.

To stress his importance to the program, the Grazer Kunstverein will devote a permanent solo exhibition to the artist’s work. The show will display different works throughout the years as well as a commissioned and acquired Discussion for the collection.


To underline this beginning, the Kunstverein will examine in the upcoming years its interior by introducing permanent or temporary (new) furniture, design, applied and decorative arts that analyze their own functionality. The Peacock, as this non-stop group show is titled, is inspired by the notion of a Period Room, a room that defines a moment in time, as well as the animal itself, one that represents a notion of internal and external pride. Each year The Peacock has a specific narrator who will provide a structural narrative to the works on display. Curator and writer Tirdad Zolghadr is invited to shape the story line for 2013.

The conceptual focus of the Grazer Kunstverein lies on the production and display of language, in which notions around communication, commitment and exchange are presented both artistically as well as discursively. The program will display (underrepresented) historical avant-garde figures vis-à-vis current art tendencies to stress its relevance and necessity within contemporary thinking.

To underscore this aspect of commitment and exchange, the Kunstverein will expand its premises with a new venue, titled The Members Library, which concentrates on the display and production of publications. The venue consists of two elements: a library (including a bookstore) and an exhibition space (dedicated to publications). The library's structure will be 'furnished' with books recommended by each member. These books (either bought or donated) have played a significant role in the member's lives (by ways of thinking) and will form the backbone for our monthly discursive program.

For the exhibition space within The Members Library, 'the book' is viewed as a venue in itself, enabling to transmit the ideas and ambience of art presentation over spatial and temporal distance. Unique (and often forgotten historical) publications will be exhibited as well as publications that are to be seen sculptures or performances.

The Members Library is presented within a permanent work by Céline Condorelli.

Our present time calls for a structure of self-organization in response to programming for mass audiences; it calls for urgent, concentrated presentations that feed a local, national and international audience. Driven by a curiosity of what an 'ideal' audience indicates, the Grazer Kunstverein continues to dedicate itself to the quality of the visitor instead of the quantity and will therefore contribute to the debate around the notion of 'the public' and 'publicness.'