"Love is Colder than Capital" is a large-scale group exhibition about the value of feelings where emotion, passion, caring, even love, are the ostensible themes but, at the same time, this essayistically conceived show never sidesteps the tricky ambiguities of such sympathy-based concepts. "Fifteen Minutes of Fame" exhibits a representative selection from TV programs of Andy Warhol, thus resuming the KUB Arena's engagement with the visual arts at their edges. 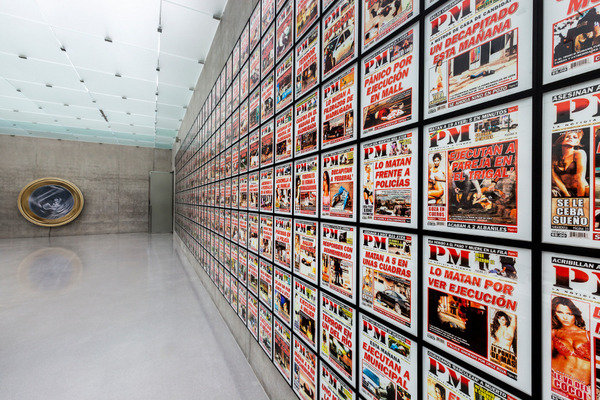 The title of the large-scale group exhibition at Kunsthaus Bregenz Love is Colder than Capital has been filched: it comes from the play of the same name by the controversial post-dramatic stage director René Pollesch, whose works deal with the neoliberal exploitation of the private and the personal by economic interests. More clearly than ever the progressive dwindling of manufacturing production and the steady rise of service-oriented industries call on the emotional commitment of workers, and make feelings—whether purportedly genuine or merely feigned—an increasingly integral part of immaterial, commodity-like products.

Similarly Rainer Werner Fassbinder’s film Love Is Colder Than Death (1969) is also all about love and its relation to money. In what was Fassbinder’s first full-length movie, a complicated ménage à trois of desire and yearning involving the pimp Franz, played by Fassbinder, his prostitute girlfriend Joanna (Hanna Schygulla), and the gangster Bruno (Ulli Lommel), ends in a furious showdown, with the cadaver of one of the three being shoved by the other two out of the moving getaway car.

Emotion, passion, caring, even love, are the ostensible themes of this Bregenz exhibition. At the same time, however, this essayistically conceived show never sidesteps the tricky ambiguities of such sympathy-based concepts.

One cannot always tell with the exhibited works whether it is the supposedly romantic idea of "true" love that is at stake, or rather a variant "tainted" by economic or other social aspects. Since the end of the first decade of this century, at the latest, it has become increasingly difficult to draw a line between what is one’s own and personal and what is public. To support this thesis it is not necessary to look to digital social networks, sifting for information about users’ activities, relationships, preferences, and hobbies according to their utility for the consumer and entertainment industries. In other areas of work and leisure, too, so-called soft, emotion-oriented factors are becoming more important economically.

It would be misleading, of course, to then argue that there is an absence of real feelings and empathy within society at present. On the contrary: the desire to create personal and social meaning beyond economic utility is stronger than ever. At the latest since the financial crises in the wake of the 2008 bank crash, the resulting Occupy movement, and the emergence of other groups demanding more social responsibility, the search for alternative models of living has been evident throughout public discourse.

Against this background and the mutual interdependence of art and society, the exhibition raises questions such as: How do artists address the relation between emotion and economy? How do they look at the latter’s assurances of sympathy? How do they reflect the ambivalence of personal and social empathy between the two poles of authenticity and staged seduction?
Some of the works exhibited use presentational and sometimes performative techniques differing little from theater and its stage practices and devices.

Many of the installations, objects, and videos have been especially created for the exhibition. Major works by Hans Haacke, Isa Genzken, and Cindy Sherman that are already part of the canon of contemporary art, are also on show. Famous works by the legendary New York artist Keith Haring will constitute a historic highlight of the exhibition, works that gave expression to the relations between love, sexuality, and commerce in innovative pictorial compositions as early as the 1980s.

Quoting German theater director René Pollesch in its title, the Kunsthaus Bregenz group exhibition Love is Colder than Capital brings together 16 artistic standpoints that explore the interrelationships of economics and feelings in contemporary society. A catalog book accompanies, documents, and complements the exhibition by means of interviews with all the participating artists who present their positions and approaches to the subject. In addition, the publication contains theoretical essays from art historical and sociological points of view on the relations between emotions and economics in the contemporary world.

Andy Warhol (1928–1987) is one of the most influential 20th-century artists whose impact is still with us today.
With his technique of serial silkscreen printing in the 1960s he turned the work of art into the perfect mass product, opening—as author and protagonist—the art world to celebrity culture and relativizing the border between high art and mass art as no other artist has done. In addition to his reproductions of the star system in silkscreen prints, photographs, and films, Warhol consistently staged his own person as a living art work.

"I love television, it is the medium I’d most like to shine in," Warhol wrote in his The Philosophy of Andy Warhol (1975). "I’m really jealous of everybody who’s got their own show on television. I want a show of my own." In the late 1970s, this self-confessed TV addict’s plans took on shape. Following the founding of his magazine Interview in 1969, his first foray into the media world, Warhol devoted himself between 1979 and 1987 to the ultimate mass medium, producing 42 of his own television programs, which were broadcast by various stations in the USA. His obsessive interest in beauty, the cult of stardom, and pop reached its definitive peak here.

His first series, the ten-part TV journal Fashion (1979–80) restricted itself to the fashion world, but in his subsequent programs Andy Warhol’s TV (1980–83) and Fifteen Minutes (1985–87) broadcast by MTV, he brought on an impressive range of stars from fashion, music, film, art, and the gay scene: from members of The Factory, drag queens, Grace Jones, Debbie Harry, Paloma Picasso, Cindy Sherman, Keith Haring, and David Hockney to the fashion designer Kansai Yamamoto and film directors such as John Waters. The programs created a new principle. Translating a celebrity and lifestyle magazine into TV format, they gave insight into Warhol’s inimitable interviewing strategy and his cult of the surface. A quarter of a century later his TV programs are like a spot-on prophecy of the booming reality TV, celebrity culture, and social media that have meanwhile spread so dramatically and become industrialized.

Andy Warhol—Fifteen Minutes of Fame will present a representative selection from this less-known complex of Warhol’s works, thus resuming the KUB Arena’s engagement with the visual arts at their edges.

The exhibition title is based on Warhol’s famous remark of 1968: "In the future, everybody will be world-famous for fifteen minutes," which set the tone for his last, five-part TV production Fifteen Minutes.
Etienne Descloux and Oda Pälmke of the Berlin architectural practice PE-P will be designing a special exhibition architecture for this presen-tation of Andy Warhol’s TV works.