The artists featured in the exhibition shift their attention from the dialectics of production towards the conditions of circulation. Here, the image can be seen as a series of gestures; as a vessel inhabited by, as much as it conditions, behaviors. 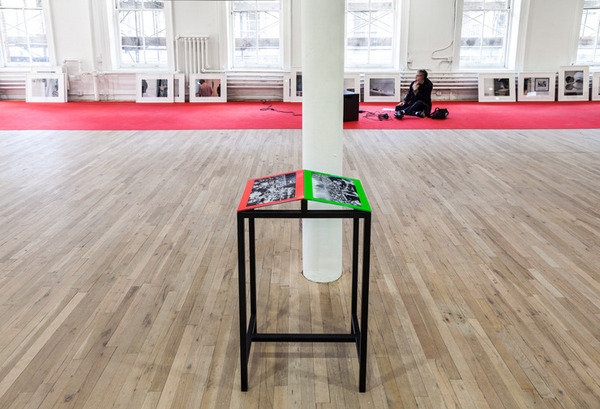 In his essay accompanying the 1977 exhibition Pictures at Artists Space, and in a subsequent text published by October in 1979, the art historian Douglas Crimp introduced the work of a generation of artists, and their use of “quotation”, “excerptation”, “framing”, and “staging”, that has since become synonymous with the postmodern relationship to pictures.

Frozen Lakes examines the prominence that these artistic strategies have for a generation of artists born after Pictures. It equally attests to the changing nature of critical inquiry within today’s economy of image production, and the shifting relationship between information and meaning.

The temporalities that Crimp identified in Pictures – “the staged tableau”, “the freeze frame”, “the historical fragment”, and “the fascinated, yet perplexed gaze” – sought to highlight the picture as a “signifying structure of its own accord”, usurping the reality that it claims to interpret. The contemporary experience of images is saturated with a heightened notion of temporality: signifying structures circulating and performing through networks of value, desire and exchange. The sense that pictures occupy very distinct places in culture, and reveal a vertical “strata of representation”, has been replaced by fluid, maybe even liquid, modes of accumulation and aggregation.

The artists featured in Frozen Lakes shift their attention from the dialectics of production towards the conditions of circulation. Here, the image can be seen as a series of gestures; as a vessel inhabited by, as much as it conditions, behaviors. Filmmaker and writer Alexander Kluge has used the phrase “frozen lakes” to speak of montage, as a means to create “still images” as a technique of focusing.

By addressing the conditions of circulation as a sphere of exchange and value attribution, and as a site for the formation of desire, Frozen Lakes focuses on the blurred states between opacity and transparency. From the mediations between information leaks and brand images, to the rendering of digital surfaces as an extension of corporeality, these processes question the experience of “presence” as integral to the “establishment of meaning.”

Shadi Habib Allah (born 1977, Jerusalem, Palestine) currently lives and works in New York, having completed his MFA at Columbia University in 2010. His recent solo projects include a presentation at Art Statements, Art Basel 43 (2012); The King & The Jester, Reena Spaulings, New York (2010); and An Ongoing Tale, Al-Hajaj Gallery, Ramallah (2006). He has also shown in several international venues including Al Hoash, Jerusalem (2012); Maraya Art Centre, Sharjah (2011); Venice Biennale, Venice (2009); and Tate Modern, London (2007). In 2011 he was awarded a grant from the Louis Comfort Tiffany Foundation.

Banu Cennetoglu (born 1970, Ankara, Turkey) lives and works in Istanbul. Recent solo exhibitions include Guilty Feet Have Got No Rhythm, Kunsthalle Basel (2011) and Sample Sale – 2010 BC, Rodeo Gallery, Istanbul (2010), and she has shown at institutions including Nicosia Municipal Arts Centre, Cyprus (2012); Kumu Art Museum, Estonia (2011); Arter, Istanbul (2010); La Coleccion Jumex, Mexico (2008); and the Walker Art Center, Minneapolis (2007). In 2008 she co-curated the exhibition Masist Gül at Schinkel Pavilion as part of the 5th Berlin Biennial, and in 2009 co-represented Turkey at the Venice Biennale together with Ahmet Ögüt. In 2006 she co-founded BAS, a space focusing on artist books and other printed media works.

Aaron Flint Jamison (born 1979, Montana, USA) lives and works in Portland, OR, where he is a founder of the art center Yale Union. He recently staged solo exhibitions at Air de Paris (2012); and castillo/corrales, Paris (2011), and participated in several group shows including the Museum of Modern Art, New York (2012); Center d’édition contemporaine Geneva (2011); Culturgest, Porto (2011); Open Satellite, Seattle (2010); and Midway Contemporary, Minneapolis (2010) among others. Jamison co-founded the artist-run center Department of Safety (2002-2010) in Anacortes, WA, and is the founder and editor of Veneer Magazine.

Tobias Kaspar (born 1984, Basel, Switzerland) lives and works in Berlin. His installation Bodies in the Backdrop has recently been shown at Galerie Peter Kilchmann, Zurich (2012) and Halle für Kunst, Luneburg (2012), along with solo exhibitions at Marcelle Alix, Paris (2012); Alex Zachary, New York (2011); Silberkuppe, Berlin (2011); Künstlerhaus Stuttgart (2009); and CCS Skopje, Macedonia (2008). Kaspar studied at the Academy of Fine Arts Hamburg, and Städelschule, Frankfurt, and has participated in several group shows including So Machen Wir Es, Kunsthaus Bregenz (2011) and How to Work, Kunsthalle Basel, Switzerland (2011). He is a founding editor of PROVENCE magazine.

Ken Okiishi (born 1978, Iowa, USA) lives and works in New York and Berlin. He has recently presented solo exhibitions at Take Ninegawa, Tokyo (2012); Alex Zachary Peter Currie, New York (2010); and Mehringdamm 72, Berlin (2010). In 2011, his video (Goodbye to) Manhattan was screened at Anthology Film Archives, New York, and in 2009 he was included in Performa 09, New York. Okiishi has participated in numerous group exhibitions including Based in Berlin, Berlin (2011); One is the loneliest number (with Nick Mauss), Institute of Contemporary Art, Philadelphia (2011); In the Middle of Affairs, Künstlerhaus Stuttgart (2010); Camden Arts Centre, London (2009); and Contemporary Art Museum St Louis (2009).

Charlotte Prodger (born 1974, Bournemouth, England) lives and works in Glasgow. Recent solo exhibitions include Studio Voltaire, London and Intermedia, Glasgow (both 2012); Kendall Koppe, Glasgow (2011); and a two-person exhibition at Essex Street, New York (2012), as well as several group shows including ICA, London (2012); Glasgow International Festival of Visual Art (2012); Hotel, London (2012); and Transmission, Glasgow (2011). Prodger is a member of the collaborative writing group Brown Study, and was a founding member of the band Muscles Of Joy. Her 16mm film works have been commissioned by Artangel and Film London, and written works published by 2HB (CCA), Market Gallery, High Horse and Victor & Hester.

Slavs and Tatars (founded 2006) is a collective whose work spans several media and cultural registers. Solo exhibitions in 2012 include Beyonsense, Museum of Modern Art, New York; Khhhhhh, Moravian Gallery, Brno; and Not Moscow, Not Mecca, Secession, Vienna, in addition to group shows including The Ungovernables, New Museum, New York (2012); the 9th Gwangju Biennial, Korea (2012); and Sharjah Biennial 10, Sharjah (2011). In 2013 Slavs and Tatars will have solo presentations at Kunstlerhaus, Stuttgart, and REDCAT, Los Angeles.