The Visitors. A nine-channel video installation based on a musical performance staged in upstate New York at Rokeby Farm. For this new work, the artist assembled a group of his closest friends, some of the most renowned musicians from Reykjavik and beyond. 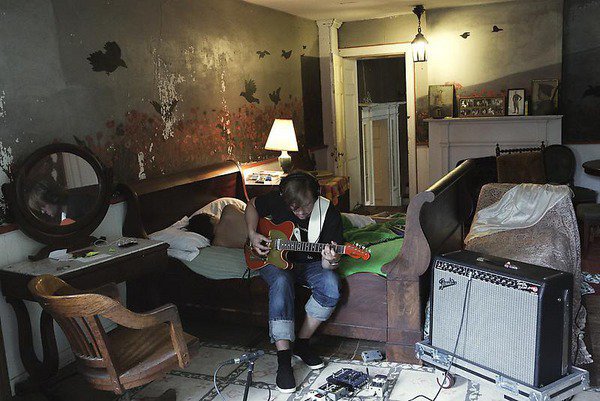 Luhring Augustine is pleased to present its second solo exhibition by Icelandic artist Ragnar Kjartansson. This show marks the New York debut of Kjartansson’s most recent project, The Visitors, a nine-channel video installation based on a musical performance staged in upstate New York at Rokeby Farm. For this new work, the artist assembled a group of his closest friends, some of the most renowned musicians from Reykjavik and beyond. A depiction of individual creative minds at work and a baring of extreme collective emotion, The Visitors continues Kjartansson’s use of durational performance to explore the persona of the performer.

Kjartansson first came to know Rokeby Farm while visiting the Hudson Valley area in 2007 and has become a frequent visitor. A site remarkable for its long and eclectic history and its state of romantic disrepair, Rokeby Farm serves as a painterly backdrop to the film’s eloquent homage to friendship. The home has stood for almost two hundred years and is run by family members who have become the artist´s friends and also perform in The Visitors. They have made it their goal to preserve the traces of the past and welcome bohemia and spirituality in all its forms.

The title of the piece is derived from the 1981 album The Visitors by Swedish pop band ABBA; the album was to be the group’s final record as divorce and internal strain ended their collaboration. With lyrics from a poem by artist Ásdís Sif Gunnarsdóttir, Ragnar´s ex-wife, and musical arrangement by the artist and Davíð Þór Jónsson, Kjartansson has staged a single-take production in which his fellow musicians perform the piece for a total of 53 minutes. Each of the nine projections in The Visitors features a participant inhabiting a separate setting in the home or on the grounds of Rokeby Farm, and when viewed together the individual scenes create a layered portrait which the artist aptly describes as a “feminine nihilistic gospel song.”

Ragnar Kjartansson was born in 1976 and lives and works in Reykjavik, Iceland. The Visitors recently debuted at the Migros Museum für Gegenwartskunst. Other recent solo exhibitions of his work have been held at the Fondazione Sandretto Re Rebaudengo in Turin, Frankfurter Kunstverein, and the BAWAG Contemporary in Vienna. Song, his first American solo museum show, was organized by the Carnegie Museum of Art in 2011, and has since traveled to the Museum of Contemporary Art in North Miami and is currently on view at the Institute of Contemporary Art in Boston. Kjartansson was the recipient of Performa’s 2011 Malcolm McLaren Award for his performance of Bliss, a twelve-hour live loop of the final aria of Mozart’s The Marriage of Figaro, and in 2009 he was the youngest artist to represent Iceland at the Venice Biennale’s International Art Exhibition.

For further information, please contact Kristen Becker at 212.206.9100 or via email at kristen@luhringaugustine.com