Art and Activism in India since 1989. Through a mix of art and ephemera, The Sahmat Collective uniquely situates two decades of contemporary Indian art within the political sphere while meditating on art's capacity as a force for change. 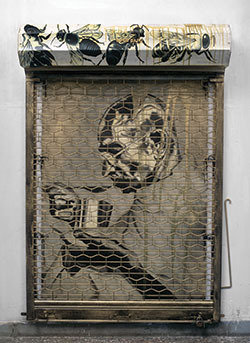 In 1989, playwright, actor, and activist Safdar Hashmi was fatally attacked by political thugs while performing a street play outside of Delhi. His death led to the founding of Sahmat, a vital platform for contemporary art in India and the subject of a new exhibition at the Smart Museum of Art at the University of Chicago. Through a mix of art and ephemera, The Sahmat Collective: Art and Activism in India since 1989 (February 14–June 9, 2013) uniquely situates two decades of contemporary Indian art within the political sphere while meditating on art's capacity as a force for change.

"It may help to see these works in the context of the 'culture wars' as they are playing out in India," said co-curator Ram Rahman. "Sahmat's projects also reflect the camaraderie and community spirit of the Indian art scene, where artists of different generations and philosophical outlooks still have a close-knit sense of community and purpose."

Sahmat is both an acronym for the Safdar Hashmi Memorial Trust and the Hindi word for "in agreement." Based in Delhi, the group pursues a mission of resistance against the forces that threaten "the essentially pluralist and democratic spirit of creative expression in India."

To this end, Sahmat has engaged a broad base of collaborators—from celebrated artists and scholars to writers, musicians, and rickshaw drivers—to create and present works of art that defend freedom of expression and battle intolerance within India's often divisive political landscape. The exhibition will introduce Sahmat to the United States by examining key projects from 1989 to the present day, including street-based mobile shows, large cultural sit-ins, performances, and conceptual exhibitions. In addition to surveying Sahmat's multifaceted history, the exhibition will assess the impact this unique—and sometimes controversial - collective has had on contemporary Indian society and artistic practice.