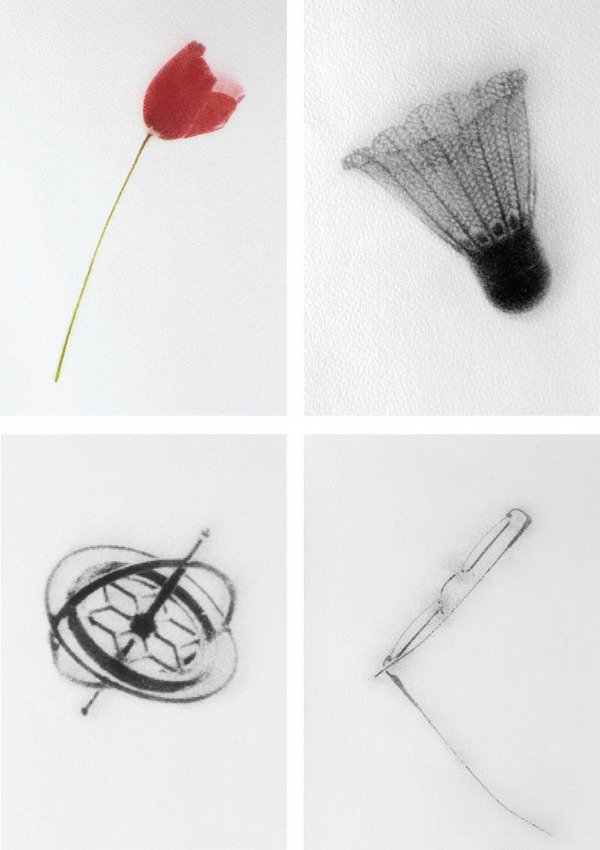 Kim Foster Gallery is pleased to present, Diversions, new photo-based oil prints by E.E. Smith. Her still life prints center on games and comment on the current economic and political climate. The show's genesis lies in a recent visit to the Netherlands where she revisited and was inspired by the 17th century Dutch still life painting she saw there. In these images, Smith invokes the memento mori, a genre that asks the viewer to heed the brevity of life. With a nod to the contemporary penchant for amusement over mindfulness, her work, on the one hand, tells us that games offer a distraction from reality, while on the other, makes references to the very issues these distractions would mask.

In Lotto, the centerpiece of this exhibit, Smith mounts forty-five vivid images in a grid formation, suggestive of the popular Mexican Lotería and lottery learning games for children. The images, of small objects found around the house, common things encountered in everyday life, are silhouetted, cut off from any contextual setting. Man-made objects (along with a few natural ones) are presented in luminous black-and white, while fruit and flowers glow with intense color, an allusion to slot machine symbols. Like the cards in the Latin game, this assortment of alluring objects seems full of symbolism and emotion, giving them a timeless quality of a Tarot card.

In the series, Twenty Questions, Smith invokes the 19th century parlor game which reduces everything in the world to three categories from the Linnaean taxonomy of the natural world: animal, vegetable and mineral. Players may only ask questions that can be answered "yes" or "no" thus further simplifying the complexity of the known world. Smith choice of subjects resonates with present-day concerns: Animal (Baby Beef) brings to mind problems of sustainable agriculture and the locovore movement; Mineral (Manhattan Bridge) reminds us of the systemic, crumbling infrastructure that plagues our country; and Vegetable (Tree) draws attention to global warming and environmental issues.

Included in Diversions are a series of more traditional still life prints that incorporate games directly. Smith gives us playing cards, dominoes, and three English walnuts (literally a shell game), overt references to gaming and gambling. These luscious, richly colored oil prints, a medium Smith has been working in for over two decades, are both lyrical and sinister, and hark back to a long visual history of depicting the role chance plays in our lives.

Kim Foster Gallery is pleased to present, Sacred Spaces, recent photographs of houses of worship by Michael Lipkin. His photographs focus on the subjective interaction with architecture.

Lipkin moves beyond the conventional definition of architecture as a visual art, that exists first in the imagination, then in design documents, and finally as bricks and mortar to be photographed at its most attractive angle. For Lipkin, architecture exists to accommodate and at times elevate our human existence. In the case of "sacred spaces," the architecture shares a history that draws on all our senses, not just visual.

He is intrigued by the abstraction of architectural space from its form and mass to its elements - light, time, and movement. The artist is inspired by the aspirations that have been realized in the construction of these buildings - to imagine the unimaginable, to witness the sacred.

Michael Lipkin is an architect, designer, photographer, print-maker, and sculptor. He received his undergraduate degree in sculpture from the University of Pennsylvania and a Master of Architecture degree from Yale.