Newhall Loop. A single channel video piece, looped. The sound is immersive, taken from everyday life, containing the bellows of trains to automobile traffic to background music at a shopping mall. 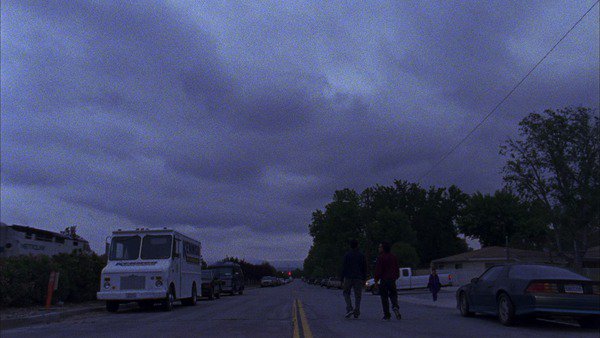 Newhall Loop is a single channel video piece, looped. The loop is just under twelve minutes long. It features two characters and no dialogue. Depending on how one looks at it, the line of images contains either no narrative or a countless number of narratives.

The loop consists of many elements, the most obvious ones being: 1. Two male characters, 2. the landscapes, and 3. their actions within these landscapes. They are not doing anything out of the ordinary–walking around, sometimes speaking (inaudibly), and sometimes merely standing.

As in any ephemeral piece, Newhall can be entered at any point in its loop, as although characters exist within a specific setting, its narrative does not necessarily require time. However, if the viewer wishes, duration will certainly affect its meaning. Rather, the narrative is open-ended, digressive, and transparent in its own frail position.

For the most part, landscapes are present on-screen, but only marginally so. Rather, landscape is an atmosphere for a narrative, a setting for dramatic, culturally-significant action. The piece, however, does not try to bypass cultural meaning (as this would be futile and counterproductive), but rather, it simply withholds conventionally linear narrative. Cultural meaning is inevitable, although most often invisible–the characters are African-American males, the town very specific in its representation of industry, development, and economy.

The sound is immersive, taken from everyday life, containing the bellows of trains to automobile traffic to background music at a shopping mall. Newhall is the district in Southern California in which the piece was conceived and shot.

Stella Ahn is a Los Angeles native. With a B.A. in Film & Media Studies from the University of California, Irvine, she went on to California Institute of the Arts, where she received her MFA in Film/Video. She likes to make experimental narratives, essay films, and video loops. Her work collects and creates narratives, unsteadily dismantling the intersections of image, fiction/reality, race, and politics.