The Studio Museum in Harlem

Excavated from the Black Heart of a Negress (excerpt): Installation at the Studio Museum will challenge habitual notions and representations of slavery. Hands on, Hands down, an exhibition of the Museum's 2002-2003 Artists-in-Residence: Louis Cameron, Deborah Grant, and Mickalene Thomas. 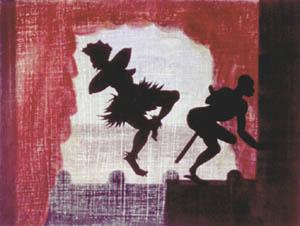 Excavated from the Black Heart of a Negress (excerpt)

-- Walker is '...dead set on remembering, so as to show that the outrages of the past have had inescapable consequences for the content and formation of present-day selves. And the task of remembering has something to say about the artist's own self-scrutiny as a black woman in America today.' -- Anne Wagner, art historian (from Narratives of a Negress exhibition catalogue)

The Studio Museum in Harlem is thrilled to announce an installation by Kara Walker, one of the most important African-American artists working today. Specifically designed for the Studio Museum's main gallery, this installation is an excerpt from Walker's current traveling exhibition, Narratives of a Negress. Organized by The Tang Teaching Museum and the Williams College Museum of Art, the works in Narratives of a Negress span the artist's career.

Walker describes the installation at the Studio Museum as 'portions of an endless and epic cycle of retribution and retaliation, [where] Negro and Whitey stereotypes reenact with histrionic aplomb the circumstances of their coming into being.' The Studio Museum's installation also will be accompanied by 'American Primitives,' a series of Walker's collages on board.

Walker is best known for her life-sized black-paper cutout silhouettes that depict racial stereotypes, slavery, sex, and violence in the antebellum South. She first came to the world's attention in 1994 when the Drawing Center in New York City presented a work that comprised only spare, expertly drawn silhouette forms cut from black paper and pasted directly onto the white walls.

'The power of the work lay [at the Drawing Center] in its combination of severe visual understatement with caustic content, where picturesque antebellum imagery mingled strikingly with cultural stereotypes. Some critics charged Walker with impropriety, while others praised her skill and inventiveness. But all agreed that her art pushed hot buttons, and did so beautifully,' according to Darby English, Narratives co-curator, associate director of research and academic programs at the Clark Art Institute in Williamstown, MA. Since 1997, Walker's work has been the subject of much debate within the African-American community.

'It's a tremendous opportunity for the Studio Museum to exhibit Kara Walker's installation, while a major survey of her work is on view at the Williams College Museum of Art,' says Thelma Golden, Studio Museum chief curator and deputy director for exhibitions and programs. 'Throughout her career, Kara has challenged and changed the way we look at and understand American history. Her work is provocative and emotionally wrenching, yet overwhelmingly beautiful and intellectually compelling. She has defined and refined her vocabulary and this installation represents a glimpse of what we have to look forward to as her work continues to develop.'

About the Artist
Born in Stockton, Calif., in 1969, Walker moved with her family to Atlanta, Ga., when she was 13. While earning a B.F.A. degree from the Atlanta College of Art, she began combining themes of slavery, sex, and violence (drawn from such cultural influences as black memorabilia, folklore, cartoons and movies, Harlequin Romances, and slave narratives) with a most unlikely medium, the old-fashioned, genteel craft of black-paper silhouettes. As Artnews noted, that fusion '[transformed] this innocuous 19th-century technique into biting, in-your-face art.'

Three months after Walker earned an M.F.A. degree from the Rhode Island School of Design in 1994, her work appeared in a group show at New York City's Drawing Center. After numerous solo and group exhibitions, Walker was awarded a MacArthur Foundation 'genius' award at the age of 27. Her work appeared in the Whitney Museum's 1997 Biennial and she represented the U.S. at the 2002 Sao Paulo Bienal in Brazil.

Walker lives and works in New York City and teaches at Columbia University.

Publication
Narratives of a Negress is be accompanied by an illustrated catalogue, co-published by the Tang Museum, the Williams College Museum of Art, and MIT Press. The 208-page catalogue is available in the Studio Museum Store.

Hands on, Hands down to THE STUDIO MUSEUM IN HARLEM

--Following the long-standing commitment to emerging artists of African descent, the works of Louis Cameron, Deborah Grant, and Mickalene Thomas

NEW YORK, NY, JUNE 27, 2003 - The Studio Museum in Harlem proudly presents Hands on, Hands down, an exhibition of the Museum's 2002-2003 Artists-in-Residence: Louis Cameron, Deborah Grant, and Mickalene Thomas. Conceived at the formation of the Museum in 1968, this annual exhibition remains central to the Studio Museum's identity and represents the culmination of a year's worth of artistic development for these artists. Trained as painters, all three artists are interested in conflating and collapsing materiality, craft, and pop iconography with traditional concerns in western painting, such as the horizon line, the gaze, composition and form.

The exhibition also will include Deborah Grant's signature 'Random Select' drawings. Ranging in size and scale, the black-on-white, glyph-based markings and imagery of political figures and cartoon characters, repeat like the chaotic noise of the world that acts as a constant talk radio station. While Grant works primarily on stretched canvas and on paper, her recent works are presented in non-traditional shapes and silhouettes such as snowmen, Mickey Mouse ears, and classroom chalkboards. She employs loaded icons and quotations as formal and didactic devices.

Mickalene Thomas's paintings and photographs included in Hands on, Hands down will depict Black female American icons and idols that explore the mystique, power and sexuality of black femininity. An examination of blackness and the untamed female (as the exotic), these works will respond to the marketing of black urban identity, specifically eroticism within popular culture. The notion of portraiture is critical to her practice. Using photo resources from out-of-date magazines and Thomas's photography, these portraits both celebrate and critique Black narrative symbols of gender and sexual behavior. Inspired by found images, pop culture and folk-art, Thomas's materials include snapshot photography and Swarovski rhinestones. The new paintings in this exhibition combine images of her mother, 1970's pornography as well as the artist.

'Hands on, Hands down... but 'hands off,'' commented Louis Cameron in conversation with exhibition curator Christine Y. Kim. 'People are always trying to touch or step on the work!' The tactile qualities of the work of Louis Cameron, Deborah Grant and Mickalene Thomas, make the art tempting to touch and ripe to consume.

About the Artists
Los Angeles-native Louis Cameron received his BFA from the University of Southern California in 1995 and went on to receive his MFA from the Tyler School of Art at Temple University, Elkins Park, Pennsylvania in 1997. He has been included in exhibitions at Jack Tilton Gallery, New York; The Contemporary Museum, Baltimore; The Studio Museum in Harlem; Exit Art, New York; and Watts Towers Art Center, Los Angeles.

Born in Toronto, Canada, Deborah Grant currently lives in Harlem. She received her BFA from Columbia College in Chicago in 1996 and her MFA from the Tyler School of Art in 1999. Grant has been actively exhibiting her work in the past two years at venues such as Triple Candie Gallery, New York; The Studio Museum in Harlem; Sarah Meltzer Gallery, New York; Yerba Buena Center for the Arts, San Francisco; and Artists Space, New York.

Mickalene Thomas is a recent graduate of the MFA Program at Yale University. She received her BFA from Pratt Institute, Brooklyn in 2000. Thomas has exhibited her work in galleries in Australia, Connecticut, Oregon, Florida, and New York. Originally from New Jersey, Thomas currently resides in Brooklyn.