An exhibition on the Centenary of the 1913 Armory Show. The show celebrates the legacy of the Cubist paintings and sculptures in the historic 1913 Armory Show by featuring a group of 27 artists, who explore the changes in perception precipitated by our digital age and who closely parallel the Cubist vernacular of fragmentation, nonlinearity, simultaneity, and decenteredness. 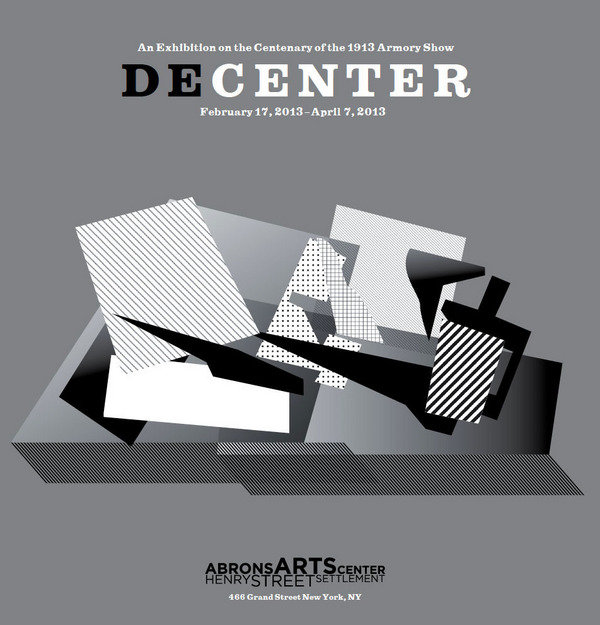 (New York, NY) Henry Street Settlement’s Abrons Arts Center is proud to present DECENTER: An Exhibition on the Centenary of the 1913 Armory Show, curated by Andrianna Campbell and Daniel S. Palmer. Opening February 17, 2013 and on view through April 7, the exhibition celebrates the legacy of the Cubist paintings and sculptures in the historic 1913 Armory Show by featuring a group of 27 emerging and internationally recognized contemporary artists, who explore the changes in perception precipitated by our digital age and who closely parallel the Cubist vernacular of fragmentation, nonlinearity, simultaneity, and decenteredness. The show exhibits a group of artworks in the gallery, and also features digital works displayed at www.decenterarmory.com.

The exhibition commences on the 100th anniversary of the Armory Show, Sunday, February 17, with a 1913 Armory Show Centennial Event, which will feature panel discussions about the 1913 exhibition, as well as the theme of perception and art in the digital age, followed by an opening reception. The Abrons Arts Center gallery, which was established in 1963 to commemorate the 50th anniversary of the Armory Show, is located at 466 Grand Street, New York, NY.

At the 1913 Armory Show, the Association of American Painters and Sculptors showcased the “New Spirit” of modern art. A backlash of scathing criticism showed how baffled the general American public was by the seeds of abstraction in the Cubist artworks, which quickly became a shorthand expression for the structural changes brought about by modernity. They not only redefined artistic practice, but also altered our understanding of the process through which we perceive the world. On its 100th anniversary, we will celebrate the Armory Show by posing the question: What is the legacy of Cubism in the hundred years since the Armory Show’s radical display of modern art, and especially, how has this become relevant today?

Accordingly, this exhibition celebrates the centenary of the groundbreaking Armory Show by assembling artworks that analyze the digital revolution and the ways it has affected our perception of the world. Artists as varied as Sara VanDerBeek, Gabriel Orozco, Liz Magic Laser, and Abrons AIRspace residency program alumna Amy Feldman evoke the formal innovations of the historic avant-garde but differ through an embrace or flirtation with digital mediation. Artists today like Andrew Kuo, Tony Cokes, and Cory Arcangel are inspired by the inter-cultural circulation of images, ideas, and data in a worldwide network. While Pablo Picasso and fellow Cubists combined archaic Western forms and appropriated exotica to shatter inherited modes of representation, today ubiquitous computing and the digital image explosion create an intersection of the physical and the virtual, and in doing so, have decentered the locus of artistic praxis.

Although the far-reaching historical significance of the Armory Show was examined through a partial re-creation on its fiftieth anniversary in 1963 (sponsored by Henry Street Settlement, at which point they created our venue – the Abrons Arts Center), even then, scholars acknowledged that the exhibition’s social import could not be replicated simply by re-staging the show. In order to honor that “New Spirit,” and the collaborative process through which the 27 members of the Association of American Painters and Sculptors organized this radical exhibit, our 2013 show will display a group of artworks in the gallery, and also feature a corresponding online component of digital works. This web-based portion of the show will grow as artists invite others to contribute in a process that highlights the diversity and expansiveness of the 1913 show’s legacy as it relates to our world today.

This event celebrates the 1913 Armory Show, exactly 100 years after its doors opened to the public. What is the legacy of the exhibition, and how has it been understood and misinterpreted? Is there a “new aesthetic” brought about by perceptual shifts in the digital era? How do these changes align with the formal innovations of the historic avant garde? These two discussion panels, organized in conjunction with Abrons Art Center’s Decenter: An Exhibition on the Centenary of the 1913 Armory Show, will address the legacy of the 1913 Armory Show, and the ways that perception and artistic practice have been radically transformed by our digital era.

Venue: Abrons Arts Center, Henry Street Settlement:
Lillian Wald started the Henry Street Settlement in 1893. It was intended to be primarily a space to aid children, families and the poor. Early pioneers in playground erection, credit union establishment, and the placement of nurses in schools, the Henry Street Settlement has had a lasting impact on the Lower East Side Community. By 1915, the Settlement began putting on plays and constructed their iconic theater. In 1963 President Winslow Carlton wrote, “Art at the Henry Street Settlement is a familiar story...as old as the settlement itself...the Henry Street Settlement does not regard the arts as peripheral activities but rather as a central element in the lives of people and a major force in shaping the character of a community.” Thus they support the presentation of innovative, multi-disciplinary work; cultivate artists in all stages of their creative development through educational programs and residencies; and serve as an intersection of cultural engagement for local, national, and international audiences and art-workers. Their sponsorship of the 1963 Armory Show re-enactment was an impetus to build a gallery, which could exhibit artwork to a disenfranchised Lower East Side Community. Now that community has become the center of art practice and exhibition.

Curators:
Andrianna Campbell - campbell@deceterarmory.com
Andrianna T. Campbell is a doctoral student in Art History at the CUNY Graduate Center. She is the recipient of the Dean K. Harrison fellowship from 2008-2012 and the prestigious Graduate Teaching Fellowship. She specializes in American art of the nineteenth and twentieth centuries. In 2010, she received the Victorian Society in America fellowship to study in London. She earned a BFA in Printmaking and a concentration in Art History from the Rhode Island School of Design. As a student, she was awarded the Andrew Carnegie fellowship from the RISD museum. Subsequently, Andrianna was the Associate Curator at Forbes Inc. where she handled an international art collection. She currently teaches art history at Parsons, The New School for Design and Lehman College.

Daniel S. Palmer - palmer@decenterarmory.com
Daniel S. Palmer is a doctoral candidate in Art History at the CUNY Graduate Center. He specializes in modern American art and architecture and focuses on the art of New York City. He is the recipient of the Marlene Park Memorial Fellowship and was a 2011 Holocaust Educational Foundation Fellow at Northwestern University. He earned his M.Phil in 2012, and a BA with Highest Honors in Art History and English from Rutgers College in 2007. While there, he undertook a Henry Rutgers Honors Thesis on the public art of sculptor Andy Goldsworthy and received the Morse Scholarship, as well as, Aresty and Bzdak travel grants. Daniel has also has undertaken research on 20th century American Art for the Whitney Museum and has taught the history of art in Paris, York College in Queens, NY, and the Spitzer School of Architecture at City College, NY.