Asphalt Black. Chew made two journeys through the Californian high desert. During these journeys he collected blown-out car and truck tire fragments from the roadside, which were then transported back to his studio where they were photographed. 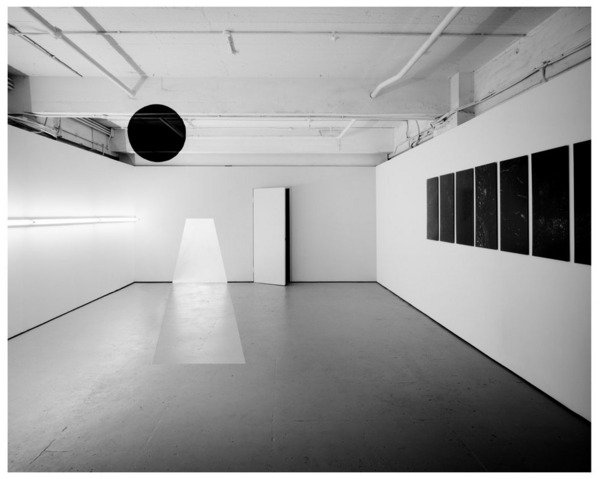 In 2009 and 2012 Leon Chew made two journeys through the Californian high desert. During these journeys Chew collected blown-out car and truck tire fragments from the roadside, which were then transported back to his studio in London where they were photographed. These images are re-presented as photographic screen prints on highly reflective polished black steel panels. Chew’s use of polished steel as a substrate for the printing process has multiple connotations – Black mirrors have long been associated with memory and spirit visioning and the use of high grade steel has a clear reference to the motorcar.

Like much of Chew’s work in the past, there is a romantic and literary tradition that refers to artists and writers that have taken inspiration from the road and the great love affair of the 20th century, the motorcar.

“Leaving Twenty Nine Palms I headed North towards Amboy. It was 11a.m. and I was running late. I pulled the car over at what looked like grand canals excavated into the dry lake bed, emerald green veins slicing through the parched salty earth. As I walked I collected pieces of tire rubber from the roadside, preserved by the static climate of the high desert, each fragment holding the memory of an individual incident, a momentary failure, a pause on a journey toward the black asphalt vanishing point…”

As a complement and reference to these works, Chew will be creating a ‘light horizon’ on the opposite wall consisting of four 4ft fluorescent tubes and battens presented as a continuous horizontal strip. This virtual horizon bisects the wall into two fields of light and shadow and will be the only artificial light source in the space.

Also on display will be two ‘anamorphic’ interventions within the gallery space. These painted works will relate both to the desert journeys and reference the conventions of representation within the installation shot.

As part of this dialogue of photographic mediation and in a break from tradition, there will only be one authorised installation shot of Black Asphalt released by PayneShurvell and Leon Chew, and no further installation shots will be taken. This singular image Reproduction… will be taken by Chew the week of the opening and will be shown in the gallery as an original work, an editioned risograph print of Reproduction will be made available free to all visitors.

The artist will also be releasing Barstow Site 1 (see image) for PayneShurvell editions. The edition represents an image Chew took on his desert road trip.

“My visit to Solar One had always been overshadowed by uncertainty – would I see anything at all? An open gate in a chain-link fence allowed me to enter the heliostat field. The aged equipment had been decommissioned and was half dismantled, hundreds of 40ft mirrors laid out on the desert floor like a monumental homage to the land artists who worked with these very materials some thirty years earlier – steel and glass against dark yellow sand, giant dusty mirrors reflecting the polarised blue of the desert sky.”

Leon Chew (b. Tyneside, 1975) has an MA in Photography from LCC, University of Arts London. Asphalt Black is his first solo show. Leon and PayneShurvell artist Andrew Curtis will be collaborating on a special project for the inaugural Art13 art fair in London this February.

Selected group shows include: Your Garden is Looking a Mess Could You Please Tidy it Up (PayneShurvell, 2011), For Japan (Aperture Foundation London, 2011), The Good Life (Garden Museum London, 2009), The Art of Photography Show (San Diego, 2009), and Hyeres Festival of Fashion & Photography (Hyeres, 2006).

Leon has been a regular contributor to British avant-garde music magazine The Wire since his first cover shoot in 2005. His work has also featured in Frieze, Modern Painters, National Geographic, Wallpaper*, New Statesman, Wall Street Journal and in book projects for the Henry Moore Institute and the Saatchi Gallery.

PayneShurvell opened in June 2010 and is run by James Payne and Joanne Shurvell. James Payne, a Fine Art graduate of Central St Martins, is a curator and the film editor of Garageland magazine. Joanne Shurvell, a former Communications Director at the Institute of Contemporary Arts, London, is a freelance arts writer and arts marketing consultant.

PayneShurvell represents a group of international artists and encourages an inter-generational dialogue, with established artists like Margaret Harrison who has several paintings in the Tate collection, alongside young and emerging artists.