On Reflection. Harrison's new exhibition is a series of work which explores ideas, images and complicated visual ideas about how we reflect in/on two dimensions. 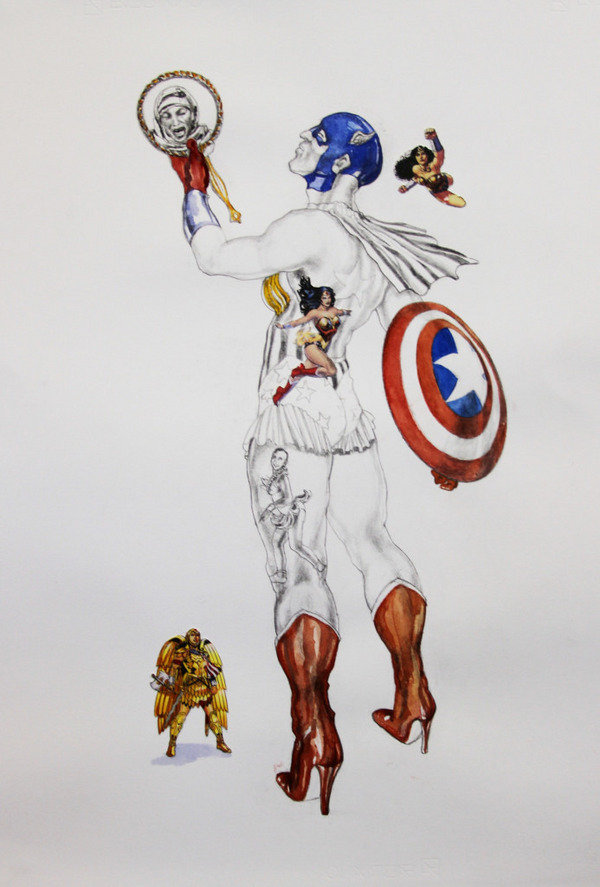 PayneShurvell is pleased to present Margaret Harrison's second exhibition of drawings and paintings at the gallery. Harrison was one of the most distinguished feminist artists and cultural activists to emerge out of the UK in the 1970s. I am a Fantasy, her first show at the gallery opened in April 2011 to great popular and critical acclaim.

Harrison's new exhibition, On Reflection, is a series of work, which explores ideas, images and complicated visual ideas about how we reflect in/on two dimensions. The mirror as a central device in European painting has long focused on the female figure in works like Van Eyck’s Marriage of Arnolfini, Titian’s Venus with a Mirror and Manet’s A Bar at the Folies-Bergère. Harrison’s work for On Reflection moves away from the traditional depiction of vanity and the male gaze to make work that challenges gender stereotyping and subverts images of identity and power. Harrison, importantly, uses humour as a tool to cross boundaries and challenge preconceptions. As Harrison says: “We are watching, viewing and reflecting on what looks at us, and what we look at. The images, which reflect our cultures of masculinity and femininity collide with transgendered realities not essentially feminine and not essentially masculine as a series of macho/femo notions in a range of complicated sliding scales”.

Hugh Hefner as a Bunny Boy and the first Captain America (1971) were shown in the exhibition I am a Fantasy (PayneShurvell London, 2011), along with more recent drawings and paintings. Some of these concerns are currently on show at Tate Liverpool, in Tracing the Century (drawings from the Tate Collection) and included in ‘Glam’ the Performance of Style also at Tate Liverpool and then touring to Germany and Austria. Her work will also be part of a group exhibition, Keep Your Timber Limber, opening at the ICA this June. Related works are on show in the 2013 Northern Art Prize at the Leeds Art Gallery for which Margaret Harrison has been short-listed. The prize winner will be announced on 23 May.

Margaret Harrison was born in 1940 in Wakefield and lives and works in Cumbria, England. She studied at the Carlisle College of Art, Royal Academy Schools, London and the Academy of Art in Perugia, Italy. She has exhibited extensively since her first solo show in London in 1971, appearing in the touring feminist retrospective ‘WACK! Art and the Feminist Revolution’ at MOCA LA and PS1 New York and solo showThe Bodies Are Back at Intersection for the Arts San Francisco in 2010. I am a Fantasy, her first London show in 40 years, opened at PayneShurvell in 2011. Her show Preoccupy opened at Silberkuppe gallery in Berlin in 2012. MIMA (Middlesborough Institute of Modern Art) will present a solo show of Margaret's work in 2015.Margaret Harrison's work is part of the permanent collections of the Tate, Arts Council of Britain, University of California, Carlisle City Art Gallery and the V&A.

PayneShurvell opened in June 2010 (“It's heartening to see the arrival of modest but confident new gallery PayneShurvell”- Time Out) and is run by James Payne and Joanne Shurvell. James Payne, a Fine Art graduate of Central St Martins, is a curator and the film editor of Garageland magazine. Joanne Shurvell, a former Communications Director at the Institute of Contemporary Arts, London, is a freelance arts writer and arts marketing consultant. PayneShurvell represents a group of international artists and encourages an inter-generational dialogue, with established artists alongside young and emerging artists.