Centennial edition. The leading international contemporary and modern art fair is devoted to showcasing the most important artworks of the 20th and 21st centuries. In its fifteen years the fair has become an international institution, combining a selection of the world's leading galleries with an exceptional program of arts events and exhibitions throughout New York during the celebrated Armory Arts Week. 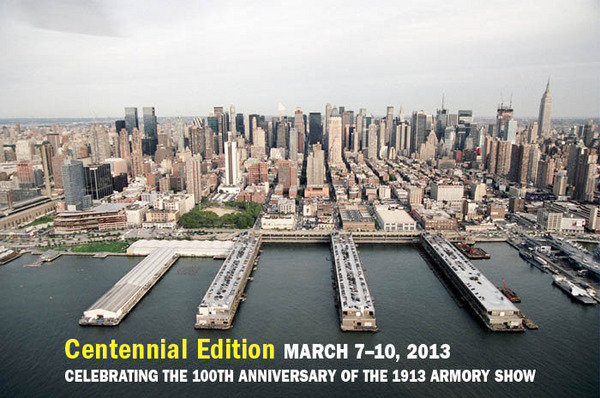 The Armory Show, New York’s premier art fair for modern and contemporary art, is proud to announce the members of its inaugural Centennial Committee and a distinctive network of Cultural Partners to mark the 100th anniversary of the fair’s namesake, the legendary Armory Show of 1913.

"For me, the most exciting art expresses new ideas and breaks advanced ground. For this reason I love The Armory Show and I’m honored to join the Centennial Committee to celebrate the history of the avant-garde. In the company of the other members, I will see the latest art from all over the world, feeding both my eyes and my brain," says collector and philanthropist Jarl Mohn.

Manuela Paz, Director of VIP Relations at The Armory Show notes, “It is an absolute privilege to herald the centennial of the original Armory Show of 1913 with such a strong, international roster of dedicated collectors. Through the enthusiasm of patrons, the spirit of the avant-garde has been able to flourish here in the United States in ways that our predecessors could have hardly imagined."

The participation of key New York and international institutions has transformed The Armory Show into an art world destination. Several of the fair’s Cultural Partners, including the Museum of Modern Art, The Metropolitan Museum of Art, the High Museum in Atlanta, the Montclair Art Museum and the New-York Historical Society, will be hosting centennial-themed exhibitions that examine the legacy of the 1913 Armory Show. New affiliations for the 2013 edition have been formed with Art21, CCS Bard, The Courtauld Institute, The French Institute Alliance Française, Performa, The Philadelphia Museum of Art, and The Andy Warhol Museum.

The Armory Show headlines Armory Arts Week, March 7-10, 2013. This year’s edition will be complemented by concurrent programming of the ADAA’s The Art Show, Volta NY, the fourth edition of the Independent, Moving Image, and Scope. MoMA will host the annual Armory Party, a benefit event for the museum in the Agnes Gund Lobby on Wednesday, March 6, 2013, 8pm – midnight.

This year’s VIP program highlights include tours of the private collections of Centennial Committee members such as Susan and Michael Hort, who annually open their Tribeca loft for a much anticipated collection-viewing brunch, an Artist Talk with Thomas Schütte hosted by Public Art Fund, a tour of artist Bjarne Melgaard’s Brooklyn studio, evenings of cultural programming and gallery visits in both SoHo and the Lower East Side, and private viewings at leading New York institutions including the Guggenheim Museum, the MoMA, The Metropolitan Museum of Art,
The Morgan Library & Museum, the New Museum, and the Neue Galerie.

The Armory Show is pleased to announce that Liz Magic Laser has been chosen as the commissioned artist for the 2013 edition. Laser's practice crosses performance, theatre and installation. She has achieved international acclaim through recent exhibitions at venues such as the Mälmo Konsthall, the Performa 11 Biennial, The Kitchen and MoMA PS1. As the commissioned artist, Laser will help create the visual identity of the 2013 fair.
Lauded as one of the single most important events in the history of American art, the inaugural Armory Show of 1913 — which presented groundbreaking works by such artists as Duchamp, Kandinsky, Picasso, and Brancusi — brought the first seeds of the European avant-garde to U.S. shores. By showcasing the innovative work of Liz Magic Laser, The Armory Show is embracing its inherited legacy as a site of discovery and experimentation, bringing the cutting edge of contemporary practice to a broader public.

The Armory Show, a leading international contemporary and modern art fair and one of the most important annual art events in New York, takes place every March on Piers 92 & 94 in central Manhattan. The Armory Show is devoted to showcasing the most important artworks of the 20th and 21st centuries. In its fifteen years the fair has become an international institution, combining a selection of the world’s leading galleries with an exceptional program of arts events and exhibitions throughout New York during the celebrated Armory Arts Week.

The Armory Show – Contemporary on Pier 94 is a renowned venue to premiere new works by living artists. This section of the fair is dedicated to showcasing international galleries, invited exhibitors as part Armory Focus, and Solo Projects, featuring single artist presentations by a selection of emerging galleries and artists.

The official catalogue of The Armory Show features a detailed profile of each exhibiting gallery and original artwork commissioned by Theaster Gates exclusively for The Armory Show.

In addition to Armory programming that will take place leading up to and during the fair, several of our cultural partners will host exhibitions relating to the 1913 Armory Show and the development of modernism. During the fair, the Museum of Modern Art will present Inventing Abstraction, 1910–1925 (December 23, 2012 – April 15, 2013), the Metropolitan Museum of Art will exhibit African Art, New York, and the Avant-Garde (November 27, 2012 – April 14, 2013) displaying African artifacts acquired by New York's artistic community during the 1910s and 1920s, and the Montclair Art Museum will show The New Spirit: American Art in the Armory Show, 1913 (February 17 – June 16, 2013). In October of 2013, The New-York Historical Society will host The Armory Show at 100, featuring such canonical works as Duchamp's Nude Descending a Staircase, first viewed on American soil at The Armory Show of 1913.

The Armory Show 2013 Opening Day takes place Wednesday, March 6th for invited guests
Annually, The Museum of Modern Art hosts The Armory Party, a benefit event with live music and DJs celebrating the opening of The Armory Show. The Armory Show, the marquee international art fair held annually in New York City, is devoted to showcasing the most important artworks of the 20th and 21st centuries. The evening reception, along with the daytime Early Access Preview at Piers 92 and 94, benefits exhibition programming for The Museum of Modern Art and MoMA PS1.

On March 6, 2013, the acclaimed musician Solange Knowles will perform live at The Armory Party in MoMA's Agnes Gund Garden Lobby.