Allan Kaprow: re-invented in the pharaonic proportions of the nave, Yard acts in this context as a metaphorical base and foundation of a history. Written like a score in which the works of Robert Combas, Daniel Buren and Nan Goldin rub shoulders with selected excerpts from Philippe Sollers, Georges Didi-Huberman, Jacques Derrida and Dominique Fourcade, "La Sentinelle" is a puzzle-exhibition. On view monographic shows by Raphael Hefti: Nature More, and Philip Newcombe: Pollen. For the opening will start the lecture programme "Think... and see". 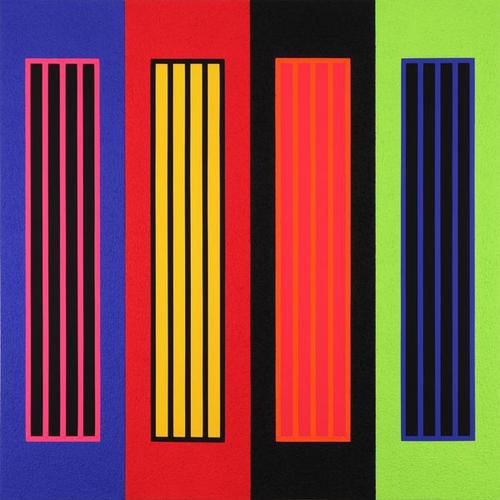 For forty years, the CAPC has been firmly rooted in the present. This is a direction which the physical power of the Entrepôt—the 19th-century warehouse housing the CAPC—has inspired and splendidly represented for four decades, broadcasting an exemplary pioneering and international program. Forged by contemporary cultures, the CAPC is a place for one and all, in which an apprenticeship in the challenges posed by culture proceeds by way of a discovery of the art of our time.

Re-invented environment
Forty tons of tires are tipped onto the CAPC’s nave. And Yard is re-invented.

As a cult environment produced by the American artist Allan Kaprow (1927-2006), from the very first time it made its intrusion into the courtyard of the Martha Jackson Gallery, in New York in 1961, it was a success. Visitors moved about as best they could on piles of tires which they re-arranged at will. Art merged with life. Since then, Yard has been re-invented several times a year, indoors and out alike. Nowadays, such a degree of adaptability for a work may seem unbelievable. It is. And the idea is all the more powerful because the impact is a visual one. Re-invented in the pharaonic proportions of the nave, Yard acts in this context as a metaphorical base and foundation of a history, the CAPC’s, and raises the issue of the anti-stage, because of the instability that hallmarks it.

The CAPC is inviting Didier Arnaudet, a faithful observer and travelling companion of the CAPC from its earliest days, to devise an anniversary exhibition. Initially involved with poetry, and editor of such magazines as A haute voix and Zone, in 1973 he met the CAPC’s founder, Jean-Louis Froment, who raised his awareness of contemporary art. A few months later, he started writing for the magazine Artpress, and duly became its correspondent in Bordeaux. Part of his critic’s memory is closely bound up with the CAPC’s history. This keen, precise and restrained memory has been amply used to set up the exhibition.

Written like a score in which the works of Robert Combas, Daniel Buren and Nan Goldin rub shoulders with selected excerpts from Philippe Sollers, Georges Didi-Huberman, Jacques Derrida and Dominique Fourcade, La Sentinelle is a puzzle-exhibition in which words and images question the museum, along with its imaginary perspectives, because they are intrinsically connected.

For years, Raphael Hefti has been working on material procedures, handling and processing substances. Which creates surprising images and objects. Trained as an engineer, with an abiding interest in the way in which things are made as well as by what they are capable of doing, Hefti conducts pseudo-scientific experiments which challenge the mechanisms of industrial manufacture, and end up by diverting things from their original state. Once the mistake in the industrial process has been discovered, he pushes it to the point where it produces an aesthetic transformation, until the accident becomes a productive force. The results of this deviating research are presented in the exhibition.

Born in Switzerland in 1978, Raphael Hefti was trained in electronics before studying art, design and photography.

Philip Newcombe subtly alters everyday objects devoid of any interest, creating, through the manipulations he makes in relation to their original function, a whole host of possible narratives. Like a beach ball deflating or a folded piece of paper carried in a back pocket, these objects go beyond the exhibition’s space/time-frame. Some are erected as performative monuments, like the fact of sucking a gobstopper or dropping a piece of thread. They are at times elusive, but Philip Newcombe’s objects are nevertheless still concerned with communicating directly and intimately with the onlooker.

Born in Germany in 1970, Philip Newcombe lives and works in London. His recent works have been exhibited in London, Rotterdam, Paris, Melbourne and Bordeaux.

François Cusset is inviting eight major intellectual figures to speak at the CAPC. Eight lecture-events, to experiment live the power of evocation, elucidation and revelation peculiar to contemporary critical thinking. Eight thinkers, to see the world differently by linking back up with the etymology of the word “theory”, theorein, which, for the Greeks, described an ability to see what is happening, what is coming to pass again. Eight voices to think about utopia, emotion, resemblance, sex, debt, the body, the brain, and politics in a new light.

François Cusset is a professor at the university of Paris Ouest Nanterre, former director of the Bureau du Livre Français, a radio commentator, and contributor to the written press. He is the author of several seminal essays, including French Theory and La Décennie/The Decade (La Découverte, 2003 and 2006 respectively). He has just written his first novel, which was published in autumn 2012 by P.O.L.: A l’abri du déclin du monde.

h 19:00
Vernissage of the exhibitions