The show elaborates the artist's on-going preoccupation with what he calls Geopoetics. On show a series of new drawings, paintings and a recent film. 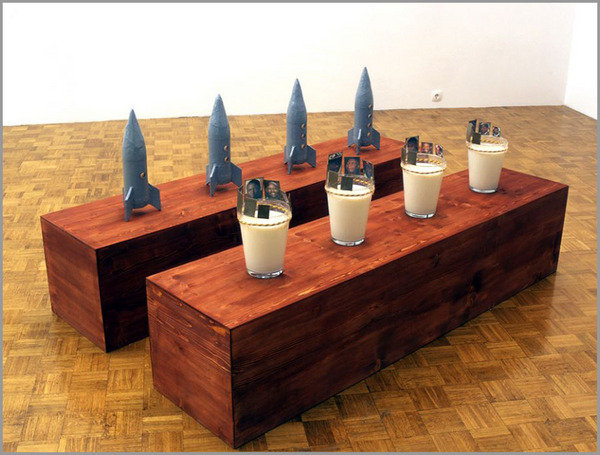 Yuri Leiderman’s third solo exhibition at Galerija Gregor Podnar in Berlin elaborates the artist’s on-going preoccupation with what he calls “Geopoetics”. Drawing inspiration from current political situations, themes and history, geopoetics seeks to transform those themes and situations into abstractions, thereby testing their elasticity while foregrounding their unexplainable character, and thus restoring to them some measure of irreducible, if ironic dignity.

This is carried out in the current exhibition through a series of new drawings, paintings and a recent film. Consisting primarily of portraits, the largely graphic and expressive paintings in this exhibition blend figuration with a kind of oneiric abstraction, formally and thematically operating according to the principles of geopoetics. This is perhaps best exemplified by an unusual portrait of Saddam Hussein entitled Saddam Hussein on Wind (2013). Here Leiderman has taken a well-circulated image of the shocked and disillusioned late dictator and transformed it, in such a way that he becomes disembodied and phantasmal, and undergoes an ambiguous pictorial redemption.

The film Birmingham Ornament (2012), made in collaboration with film- maker Andrey Silvestrov, comprises a series of seemingly random fragments, which weave together documentary fact with fantastical fiction whose nature become more and more outrageous as the film progresses. Alternating between passages of the artist’s father recounting tales of life in Russia during World War II, a charismatic folk singer from Odessa, and the ludicrous, self-reflexive musings of two deadpan newscasters, the side-splittingly funny film merits multiple viewings. Along with the rest of the work in this show, it offers a crucial opportunity to grasp and appreciate the simultaneously deflating and redemptive logic of Leiderman’s singular geopoetics.