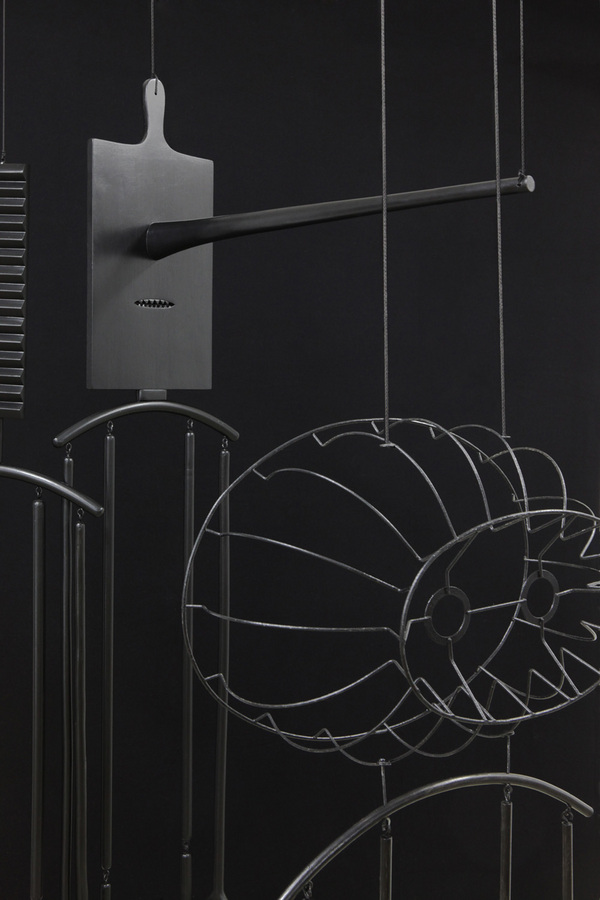 The gallery is pleased to present an exhibition of new works by Wiebke Siem. There will be also the first solo show of Jadwiga Maziarska in Germany (curated by Barbara Piwowarska).

On the occasion of Jadwiga Maziarska’s 100th birthday, Johnen Galerie indroduces her work, still not well known in this country. Not only the Polish background connects Wiebke Siem with Jadwiga Maziarska, they are also related by their great appreciation of the dark, theatrical and political work of Tadeusz Kantor. In Jadwiga Maziarska’s work the optimism of modernism is palpable, Wiebke Siem’s observation of modernism is rather critical and ironical. During the 1970s and 80s the work of both artists shared some common ground and thus led to some interesting confrontations.

Wiebke Siem’s new works combine collage, sculpture and drawing into figures of highly ambivalent appeal. The viewer discovers allusions to Classic Modernism, housekeeping and kitchen, and African sculpture. These spheres are being interwoven ironically, making it difficult to determine irony, seriousness, citation, homage, play and deeper meaning. The viewer is confronted with ghosts haunted by unredeemed energies. Wiebke Siem does not take anything lightly. She does not call off the shackles of form, but stretches it, cuts it into pieces, mocking and respecting it at the same time.

Brancusi, Giacometti and Max Ernst as well as Wilhelm Busch and Oskar Panizza keep haunting the world she creates with her figures. Her characters move in spheres beyond concepts of male and female. All boundaries are dissolved. What remains are forms, and references, reorganized by Wiebke Siem, according to the classic codes of aesthetics.
The graphical and abstract element of her work is accentuated by the black paint finish. It creates the impression of wafting lines rather than materials. The figures see-saw between two- and three-dimensionality, thus increasing the ambivalence with regards to form and content.

In time of the exhibition hot skillet mama a catalogue will be published by Verlag für Moderne Kunst in Nuremberg.

Jadwiga Maziarska (1913 – 2003) reminds, recalls, and foretells something. This resembles the process of developing film, or watching a movie – scene after scene, though she only worked with paint, wax and collage. The exhibition is the first individual presentation of Maziarska in Germany, aiming to introduce her work in a representative way – exposing her artistic process, the leading series and techniques developed by the artist between 1940s and 1990s. It includes realistic abstractions (paintings, objects, sculptures), collages and newspaper cuttings (sketches). Maziarska, famous for her textile appliques from the 40s, ‘matter-paintings’ and wax reliefs from the 50s, belonged to the pre-war leftist avantgarde generation and is one of the most important Polish women artists of the twentieth century (along with Alina Szapocznikow; or Erna Rosenstein). She lived in Krakow and was active in the closest circle of Tadeusz Kantor with whom she co-founded the ‘second’ Krakow Group. Maziarska’s processual art and polyphonic language of the photographic appropriation reflect the prewar avantgarde believes and the postwar re-evaluation of materialism and matter as such. The first works in the exhibition date back to late 1940s – early 1950s, the period when Maziarska participated in The First Exhibition of Modern Art in Krakow (1948) – a pre-war communistic artistic formation that attempted to offer abstract realism as a counter-reaction to the upcoming social realism of the totalitarian era. Maziarska’s interest in the diversity of shapes and the consistent usage (deconstruction – reconstruction) of her newspaper cuttings might be perceived today as a laboratory of an archive and an atlas of the imaginary.

This exhibition shows works from such an archive of her artistic approaches – the relation between imagination, memory, and interpretation.

Jadwiga Maziarska was born in 1913 in Sosnowiec (Silesia, Poland), died in 2003 near Krakow at the age of 90. She studied Law and Social Sciences at Stefan Batory University in Vilnius, and later at the Painting Department at the Krakow Academy of Fine Arts between (1934 – 39), together with Erna Rosenstein and Tadeusz Kantor. In 1957 she became co-founding member of the ‘second’ Krakow Group, and went for the first time to Paris. She revisited Paris in the following years and cooperated with Galerie Stadler and Galerie Louise Leiris. The artist exhibited widely in Poland and abroad, including Zachęta Gallery in Warsaw, Galeria Krzysztofory, and National Museum in Krakow. In 1969 she took part in Espaces abstraits, an exhibition held at the Galleria d’arte Cortina in Milan (organized by Michel Tapié, an author of notions of informel and art autre) in the section ‘métaphysique de la matière-espace’ (with Fontana, Pollock and Wols). In 1991 the Palace of Arts in Krakow hosted her monographic exhibition. In 2001 she received the Jan Cybis Award. Her most extensive post-mortem retrospective was organized in 2009 at the Centre for Contemporary Art Ujazdowski Castle in Warsaw. Her works were recently presented in 2012 at Art Stations Foundation, Poznan in Parallel Systems: Gego/ Maziarska/ Trockel.