Laib continues to employ natural materials, such as beeswax and rice, organic elements selected for their purity and symbolic meaning. For "Without Beginning and Without End" he meticulously melds wax slabs to form a ziggurat over 14 feet high, creating a connection between the earth and sky. "messages.calendar.camera.jpg" is an exhibition of new paintings and drawings by Andrew Sendor. His works documents neither the past nor the future but both. 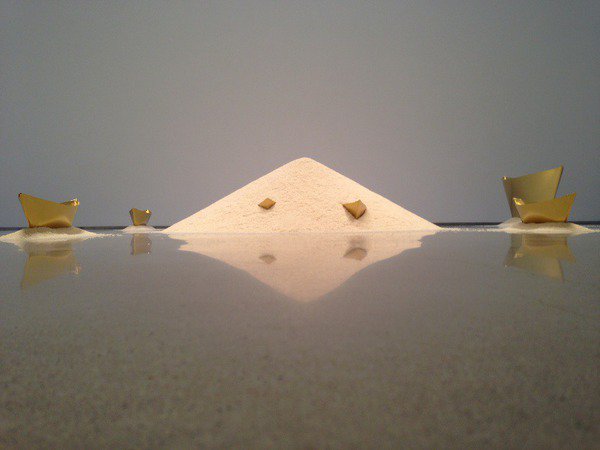 Wolfgang Laib
Without Beginning and Without End

Sperone Westwater is pleased to present Without Beginning and Without End, an exhibition by the German artist Wolfgang Laib. For the artist’s seventh solo show at the gallery, Laib continues to employ natural materials, such as beeswax and rice, organic elements selected for their purity and symbolic meaning. The Museum of Modern Art in New York and the Phillips Collection in Washington, D.C. will host concurrent installations.

For Without Beginning and Without End (2005), the title of the exhibition, Laib meticulously melds wax slabs to form a ziggurat over 14 feet high, creating a connection between the earth and sky. A monumental architectural structure, the ziggurat reflects the artist’s interest in pre-modern and non-western dwellings and spiritual spheres from ancient Middle Eastern and South Asian cultures. Juxtaposed will be several brass ships, some mounted on the wall and some posed in mounds of rice on the floor. These ships suggest a journey to another world, echoing the meditative attributes of the ziggurat. Also included will be Untitled (Stairs), a sculpture of Burmese red lacquer and wood as well as several jars of pollen.

At MoMA, Laib’s Pollen from Hazelnut – his largest pollen piece to date measuring approximately 18 x 21 feet – will be on view in the Donald B. and Catherine C. Marron Atrium from 23 January to 11 March 2013. Laib utilizes hazelnut pollen which he has collected around his home and studio in southern Germany since the mid-1990s. The Laib Wax Room at The Phillips Collection opens on 2 March 2013. Measuring 6 x 7 x 10 feet, this cocoon-like chamber, with walls and ceiling coated in beeswax, is the first site-specific, permanent wax room created for a museum.

Sperone Westwater is pleased to present messages.calendar.camera.jpg, an exhibition of new paintings and drawings by Andrew Sendor. This is the artist’s first solo exhibition at the gallery.
Sendor’s paintings document future museum installations that we are tempted to think are fictional or imagined. At the same time though, art history is full of examples of historical works that turn out, in hindsight, to have been prescient. Romantics tell us that this is what artists do. But just as we can look at works of art from the past that from a future perspective turn out to have been ‘true’, we can look at Sendor’s works and imagine ourselves in his future time and place that these ‘documents’ are evidence of. If prescience can be applied retroactively to images from the past, why can’t we also apply prescience proactively to present-day images of a future history? If, as good post-modernists, we hold that history is relational and relative, then why should it matter whether the documentation of an event was executed before or after the event itself?

Site specific installation with “Pixelated Portrait of Hugo L. Hugo”, Artist Unknown, 2031, oil on canvas, 38 X 22 inches is a painting of a painting leaning against a tree. This painting is of a future installation that is site specific. But while the notion of ‘site specificity’ is, itself a conceit of contemporary art, the painting techniques that Sendor employs signals a deep affinity to Renaissance masters through to the early moderns. The future installation includes a painting of digital information, pixilated in such a way that its essential ‘digitalness’ renders it opaque. An analog image of a future painting (also analog) of digital information whose very code, whose binary DNA, has transformed into pixilated abstraction. In an inversion of the Paleolithic, Sendor brings together in each, discrete painting or drawing the evidence of historical change and sequence that makes his works function in much the same way as the figures at Lascaux. The result, in each case a paradox, is the same. Lascaux does not document a single place or time – it documents a period of thousands of years and a ‘place’ that is thousands of miles in size. Sendor’s works documents neither the past nor the future but both -- paintings that are not about any time or place, but are about many times and places all at once.

Image: Wolfgang Laib, Without Beginning and Without End. Installation Views

For more information and images, please contact Aurelia Rauch at +1 212 999 7337 or aurelia@speronewestwater.com