From Beckmann to Warhol

Art of the 20th and 21st Centuries. To mark their 150th company anniversary, a selection of the most significant works from Bayer AG's company art collection in conjunction with the Martin-Gropius-Bau in Berlin. Works by major artists including Max Beckmann, Andy Warhol and Pablo Picasso, will be presented to the public in a selection of 240 oevres by 89 artists. 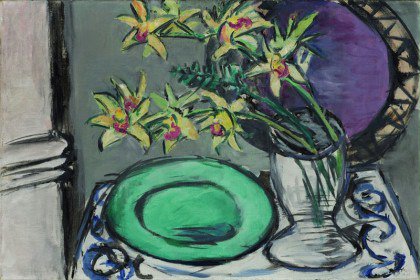 The Bayer Collection is among the oldest art collections in Germany. Conceived as a educational facility for company employees in the early 20th century, it now includes around 2,000 works. Although the list of works does not have the character of a systematic encyclopaedic index, it actually reads like a who's who of the 20th and 21st centuries. It includes works by the great expressionists like Beckmann, Kirchner and Pechstein as well graphics and paintings by Pablo Picasso, Sam Francis, Miró, Gerhard Richter, Andy Warhol, Andreas Gursky, Imi Knoebel and young Ars Viva Prize winners. With over 240 works from 89 artists this exhibition presents a piece of art and company history. To mark the company's 150th anniversary the collection is to be shown in public for the first time.

The collection can be roughly divided into four art-historical areas. It presented German Expressionism with works by Max Beckmann, Ernst Ludwig Kirchner, Emil Nolde, Max Pechstein and Karl Schmidt-Rottluff. The Modernism of the École de Paris – this covers the entire Paris art scene at the beginning of the 20th centuries – represented by works by the artists George Braque, Marc Chagall, Joan Miró and Pablo Picasso. Representing post-war and informal art the collection includes artwork by Ernst Wilhelm Nay. With his free and spontaneous drawings and his intuitive use of colour this participant of the 2nd and 3rd "documenta" occupies a key position in German post-war art. The main focus is on art produced between the 1970s and today. It is in this context that the collection takes in the works by American West Coast artists like David Hockney, Sam Francis and Ed Ruscha. On display also are canvasses from German artists Gerhard Richter, Albert Oehlen, Martin Kippenberger, Jan Voss as well as photographic works by Thomas Ruff, Candida Höfer and the large format polaroids of Marina Abramović and Ulvi Ulay.

It was Carl Duisberg, the company's chief executive from 1912 till 1925, who laid the foundations of the current collection. In 1909 he commissioned Max Liebermann to paint his portrait. In the years following the Second World War those responsible for the collection bought whatever appealed to them and was not too expensive. The objective at that time was not to tie up money as an investment for a particular time but rather to make artworks available to staff members for a certain period as part of their office furnishings. Today any existing gaps in the collection are being closed bit-by-bit and collecting activities are aimed at enhancing the existing items and setting new accents. Now for the first time ever a part of the oldest private art collections in Germany is being put on display outside of Leverkusen.

Press conference Thursday, 21 March 2013, 11 am Martin-Gropius-Bau, cinema hall
The opening will take place on Thursday 21st March at 7pm in the company of Mr. Bernd Neumann, Minister of State for Culture and Media, and Dr. Marijn Dekkers, Chairman of the Executive Board of Bayer AG.