Portraits of growing older. Taking 15 artistic perspectives as cases in point, the exhibition combines concepts which deal in differing ways and over varying periods of time with individual lives and the changes which take place in oneself and in others. The art works shown raise complex issues about life plans, fate and influences, and impress with their convincing realization. 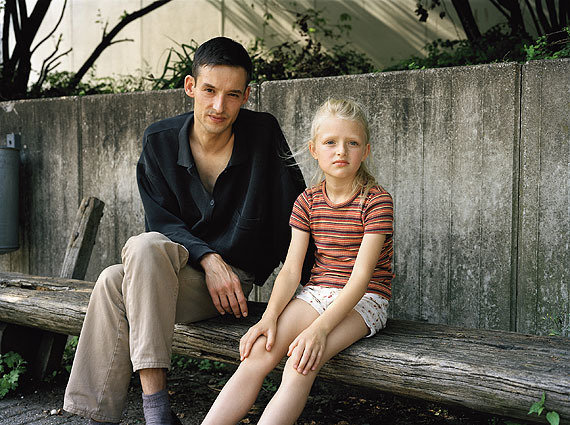 Taking 15 artistic perspectives as cases in point, the AGES – Portraits of Growing Older exhibition brings together a variety of, serially arranged, portrait projects. The artists from the USA, Japan, the Netherlands, Germany, Finland, Russia, Austria, Poland/France and Switzerland were all born between 1923 and 1979. This allows for the work of several generations of artists to enter into a fascinating dialogue with each other against an international backdrop. The main focus is on photography alongside additional filmic approaches as well as painting.

The artists chosen for this exhibition photographed one and the same person, sometimes themselves, regularly and frequently. No matter whether it is Richard Avedon (1923–2004), who captured pictures of his seriously ill father several times during the last years of his life, or Nicholas Nixon (*1947), who has portrayed his wife with her three sisters every year for more than three decades. These exemplary works, which have already found their place among the classics of photography, achieve their fascination not least through the fact that they were created rigorously over an extended period. They make it clear that the systematic repetition and quasi scientific-artistic methods are the principal factors that make a comparison possible which provides us with an understanding of – and therefore insight into – fundamental, universally valid structures.

The Landesgalerie Linz and Die Photographische Sammlung/SK Stiftung in Cologne, with Stefanie Hoch, Martin Hochleitner, Gabriele Hofer-Hagenauer, Gabriele Conrath-Scholl and Claudia Schubert as the team of curators, worked together on developing the AGES project for the past two years. This is the seventh undertaking that the two institutions have either participated in or initiated against the background of their special interest in documentary photography since 2006.

The renowned photographer Richard Avedon (1923–2004) described the portraits of his father Jacob Israel Avedon as the most moving work of his career. They were created during the last years of his father’s life from 1969 to 1973 when he was already suffering from his terminal illness. Avedon portrayed his father from the front, usually in the classical bust pose, in front of a monochrome white background. In 1993, he made the following formulation of his use of this seemingly harsh setting: “If it is successful, a white background makes it possible for people to become symbols of themselves.” (Evidence, Munich: Schirmer/Mosel, 1994, p.59) The series of portraits of his father provides impressive proof of this. In combination with the serial approach, the portraits of Jacob Israel Avedon offer a personal, universally expressive statement on aging, dignity, trust and the fear of loss.

Christian Borchert (1942–2000) worked on his series of Family Portraits in the former GDR in 1983/84. Around 10 years later, after the reunification of Germany, he visited the families once again and photographed them in their private dwellings. A comparison shows that the rooms and the atmosphere had hardly changed; however, the members of the families had. They were all now a decade older and some of the new constellations in the pictures indicate that their lives and responsibilities had altered; not least as a consequence of being part of a society in the process of restructuring.

A chance encounter triggered Rineke Dijkstra’s (*1959) Almerisa series. The photographer met the five-year-old Bosnian refugee girl in a home for displaced persons in 1994 and photographed her eleven times at irregular intervals in the years to 2008. One not only sees a child growing up; changes in Almerisa’s attitude and clothing demonstrate the increasing influence of the modern Dutch society on the girl.

The portraits Seiichi Furuya (*1950) created of his wife Christine during the years they spent together from 1978 to 1985 have a great emotional impact. Her increasingly manifest mental illness is reflected in the images. A fragile-looking young woman gazes into the camera; although she is shy, she tries out various roles and poses not without a sense of self-assurance. Until today, years after her suicide in 1985, his wife is still on Furuya’s mind and he repeatedly rearranges her pictures to form new constellations.

Milena is the name of the young girl Stefanie Grebe (*1964) has placed in front of her camera approximately once a year since 2002. However, it is up to Milena to choose the location for the sessions. The clothes she wears are less determined by the fact that she is being photographed than by Milena’s stage of development and mood at the time that is then expressed in their style and colour.

The artist Roni Horn (*1955), who lives in New York and Iceland, uses photographs from a number of different sources showing the artist in various phases of her life in her a.k.a. series. She unites two shots – usually one of her as an adult and the other from her childhood – to form a pair of pictures. Not only biological ages are contrasted with each other but also facial expressions that are generally valid and make one think about typical facial features. The aim is to stimulate a reflection on identity, self-image, development and change hinted at in the title “also known as” a.k.a.

The young Finnish artist Wilma Hurskainen (*1979) deals with the construction of memory in her Growth series. She includes photographs her father took of her and her sisters during their childhood and adolescence. Hurskainen juxtaposes these with a contemporary group portrait created to resemble the earlier location and clothing. This leads to pairs of images that investigate collective memories taking the personal family constellation as an example.

The projects of Andreas Mader (*1960) and Anna Jermolaewa (*1970) are also connected with the photographers’ biographies. The Russian artist revisited five of her former classmates from an art school in St. Petersburg when they had reached the age of 40. Mainly film portraits were created; in the form of conversations and images, they report on completely different life models that Jermolaewa presents as a multimedia spatial installation integrating paintings.

The Austrian artist Friedl Kubelka (*1946) photographed her daughter every Monday until she turned eighteen. She then arranged the small-format, black-and-white photographs that focus on her daughter’s face, into yearly panels that remind one of a calendar.

In 1988, the Swiss photographer Andreas Mader (*1960) took the first portraits of his friends that proved to be the starting point for an ongoing project without any fixed termination date. The coloured photographs are taken in private flats, as well as in gardens and parks or at the beach, and in this way provide information on the life situation of the persons shown at that particular time. Mader describes his intention in the following way: “Their pictures form a kind of chronicle of their and my lives that I intend to keep on writing. But, from the outset, they are much more than that. They deal with those things that are important in life: with love, solitude, children growing up, aging, time imperceptibly trickling away.”

Michael Mauracher (*1954) knows very little about the personal circumstances of the man he has been photographing since 1981. This was a conscious decision that stresses the present moment of the photographic encounter just as it does the universality of his model – a human being.

The photographer Nicholas Nixon (*1947) had been married to his wife Bebe for around four years when he took the first group portrait of her and her three younger sisters at a family reunion. He made the decision to continue to photograph the sisters every year in the same order with Heather, Mimi, the youngest, Bebe and Laurie placed next to each other from left to right. The pictures not only make us aware of the aging process of the protagonists that has occurred over the years but each one also tells us of the close relationship between the three sisters. Many pictures were taken outdoors with trees or a beach forming the background to further underline the informality and directness of the situation.

The deceased artist Roman Opalka (1931–2011), who is famous for his monochrome panel paintings of continuing series of numbers, ended his day’s work in the studio with a photographic self portrait. He will be honoured in this exhibition with the presentation of a limited edition that was published in 1992. His photographic images create the feeling of the confirmation of his existence in the unstoppable stream of time that the endless rows of numbers on his paintings and graphic works reveal to us so impressively and with such symbolic force.

The photographer Helga Paris (*1938) casts a glance at her own person. The black-and-white self portraits from the 1980s convince with their documentary feel; they are unfussy, straightforward and direct. We see a woman who looks honestly and critically at herself and her innermost feelings. Nothing distracts from the face and the viewer is called on to concentrate on the fine nuances and almost imperceptible changes of expression and appearance.

The video-portraits Thomas Struth (*1954) filmed in 1996/97 and 2003 are projected in a large format. They show individual shots, concentrating on the head and shoulder sections, of various people from the artist’s personal environment. The filmic portrait of each person lasts one hour; the time needed to create the film is the same as that needed to view it. There can be no question that Struth demanded a great deal of concentration and discipline from those he portrays. In this contemplative situation, external influences recede into the background. Minimal changes can be perceived if one watches continuously and inner worlds increase in significance for both parties.

A catalogue, including a text by the Austrian writer Franzobel, is being published by the Edition Fotohof, Salzburg, to accompany the AGES – Portraits of Growing Older exhibition.