Painting 'Beyond' The Medium. The works shown at the first internationally themed group exhibition Chat Jet, presented on the occasion of the Kunstlerhaus re-opening, are dedicated to current approaches in painting that might be labelled as painting beside itself, or outside of its original frame. 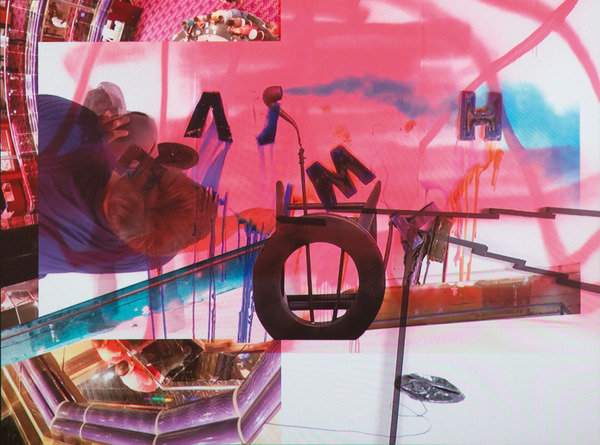 The works shown at the first internationally themed group exhibition Chat Jet, presented on the occasion of the Künstlerhaus re-opening, are dedicated to current approaches in painting that might be labelled as painting beside itself, or outside of its original frame. An essential thread of this current discourse on painting becomes disengaged from the frame to embrace the space beyond the canvas, as evident for instance in Lotte Lyon’s wall piece in the exhibition venue’s foyer or in Alexander Wolff’s living exploration piece in the apse. At the same time, classical materials like pigment, acrylic, and canvas experience a more restrained use, with painting playing out on all kinds of surfaces and with widely divergent materials and “grounds” being employed. The idea takes centre stage in lieu of artisanship, as is illustrated by the works of Monika Baer, Michael Krebber, or Andy Boot shown in the exhibition, which position “painting” as context-specific, or even with humoristic connotations, but always extending beyond its medium.

The prevalence and popularity of the question of the “status quo” of “painting” is paralleled by the manifold answers of this cherished “old aunt”. Martin Kippenberger, for one, asserted in 1991: “Simply to hang a painting on the wall and say that it’s art is dreadful. The whole network is important! ... When you say ART, then everything possible belongs to it. In a gallery that is also the floor, the architecture, the color of the walls. All of this is just as important as the picture on the wall itself.”1 A number of artists in this exhibition have created works based on these considerations, and similar ones, yet with temporally shifted and more refined knowledge of media. In pieces by the artists Will Benedict or Lucie Stahl, as well as those shown in this exhibition by Birgit Megerle, painting is seen to be reflected in the medium of photo­ graphy. Here, the at times media-induced doubling of the pictures is keenly discussed in broader contexts, whereby the specific nature of each work is significant and no one aspect is seen to overlay another. The artists explore possible variances in their own position in reaction to developments and discussions about “painting” while simultaneously embedded in an elaborate network of fellow artists, curators, critics, gallerists, and collectors.

The exhibition Chat Jet – Painting ‹Beyond› The Medium and the works it presents are devoted to such issues, to this “buzz” that may even swell to a performative mantra, as in the performances by Ei Arakawa: “Running painting painting Running Out Painting Painting is Watching.” Many of the artistic approaches taken in the exhibition seem to roughly unite, fostering questions as to how such performative practices or delegated performativity (as in the case of Reena Spaulings and her “Michael” series), digital strategies (as in the case of Wade Guyton), or linguistic considerations (thematised by Stefan Sandner, Jana Euler, Arakawa/Gambaroff, or Blake Rayne) take painterly recourse to the canvas – questions as to how painting reacts to the challenges of an increasingly mediatised society characterised by a proliferation of technology and a globalised structure.

What are the media, structures, and surfaces employed in painting nowadays, and have we reached a point where the image is fractured into fragments? How does it remain possible to demarcate and define painting when it faces these greater mediatic challenges and even enters into alliances with techniques that were formerly alien to painting? Might painting’s reflexive game with its own remnants generally refer to the breakdown of separation in the field of visual culture, and what are the conditions for viewing? The concluding question influencing the exhibition is: Why pursue painting, and how, in today’s digital age?

Chat Jet was conceived by Sandro Droschl in collaboration with Christian Egger, who has assumed a curatorial position at the Künstlerhaus.

The comprehensive project includes an accompanying program and an exhibition catalogue.

Exhibition openings in the frame of CMRK (Camera Austria, Kunstverein Medienturm, < rotor >, Grazer Kunstverein)
CMRK is a network of four independent Graz-based non-profit institutions, whose common interest is the communication of contemporary art within an international context.