Of the American painter Alex Katz the museum is showing works from 1948 to today. The theme of the exhibition, landscapes, is not understood in the conventional sense, but also as a terrain for various contexts and constellations. Joachim Grommek's works are subtle comments on the fundamental issues of painting; they deceive our senses and let us only gradually realize that they are not what we believed to have seen in them. 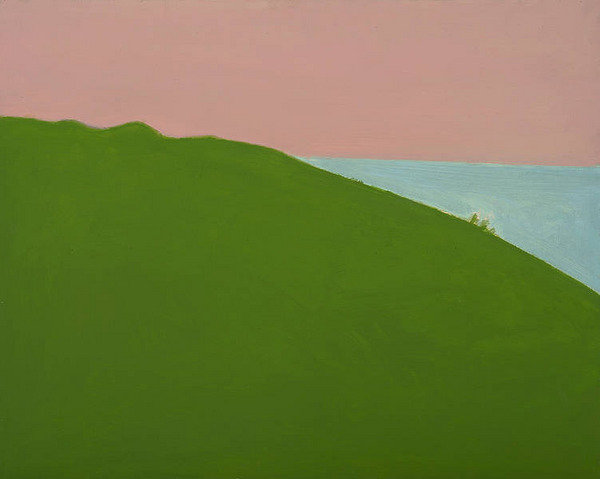 Museum Haus Konstruktiv begins its annual program with two exhibitions which pursue the essence of painting. Alongside the American painter Alex Katz, we are presenting a solo exhibition by the German artist Joachim Grommek.

As the first Swiss museum to do so, Haus Konstruktiv is dedicating a comprehensive solo show to the great American painter Alex Katz. The museum is exhibiting works from 1948 to today, also including works which as yet have seldom or never been presented in any institution.

The theme of the exhibition, landscapes, revolves around the observation that, in particular, it is landscape, as a quite metaphorical factor, which runs through Alex Katz's entire oeuvre like a common thread. Here, landscape is not understood merely as natural landscape in the conventional sense, but also as a terrain for various contexts and constellations. This is because the term 'landscape' alludes to diverse contexts of meaning; it refers to geographical areas, as well as to various motifs of an aesthetic whole. By having landscapes as the exhibition's theme, Museum Haus Konstruktiv wants, on the one hand, to draw attention to the associative space in Alex Katz's works, but also, on the other hand, to make it clear that many of his works mark a particular moment between what one sees and what one can experience mentally.

Alex Katz, born 1927 in New York as the son of Russian-Jewish immigrants, is one of the most important painters of our time, worldwide. Katz studied at the Cooper Union School of Art from 1946 to 1949. He then attended the renowned Skowhegan School of Painting and Sculpture, which would later also produce such important artists as David Reed and Jason Rhoades, among others. From the 1950s onward, Katz developed a very independent painterly language which addresses the traditional genre of the landscape, as well as the portrait or figure painting. Although the general public sees Alex Katz as a pop artist, he does not consider himself to be one. Rather than emanating from a graphic implementation, such as that which gives pervades the works of Robert Indiana or Roy Lichtenstein for example, his images always emanate from painting. Katz always begins his work by occupying himself with paint, from which he develops his very characteristic large-scale intercourse with space. The design of his pictorial reality is usually laid out extensively and appears with sharp, clear edges in his works from, at the latest, the end of the 1960s onward. He sees himself as a post-abstract painter who, in his realistic painting style, arranges the figure elements and sign elements in such a way that the observers combine them "in their heads" themselves. Katz is interested in the elementary question: What is reality? Taking this question as a starting point, he has spent the past 50 years repeatedly exploring possible ways with which "realism" can be redefined. Color and light play a central role in his works. Thus, even despite the ostensible realism, he pays less attention to the motif than to the look and style, i.e. the appearance. Alex Katz is represented in numerous international private collections and museum collections, and can look back on a wealth of international exhibition activity. Thus, it is all the more astonishing that no Swiss museum to date has honored his comprehensive body of painting work with a large solo exhibition, even though Katz is also present in numerous private Swiss collections. This omission is finally put right by the exhibition at Museum Haus Konstruktiv. In addition, Musée cantonal des Beaux-Arts in Lausanne is opening the exhibition "Peinture.

Alex Katz & Félix Vallotton" on 21 March. In his comprehensive solo exhibition at Museum Haus Konstruktiv, Alex Katz focuses on the theme of landscape, for it is precisely this motif which continues all throughout his artistic career, from his early, still rather abstract paintings, through to the very latest landscape formations, which are up to seven meters long. In his oeuvre, landscape means much more than simply nature; for him, landscape stands for places, contexts and relationships. For this reason, Museum Haus Konstruktiv shall supplement the "landscapes" by also presenting a specific selection of his figure paintings and floral paintings.

Alongside the American painter Alex Katz, we are presenting a solo exhibition by the German artist Joachim Grommek (born 1957 in Wolfsburg, lives and works in Berlin). Ever since the start of his career, Grommek has followed a painterly strategy which plays with illusions and puts our perception to the test. His works are subtle comments on the fundamental issues of painting; they deceive our senses and let
us only gradually realize that they are not what we believed to have seen in them. Clear geometric forms, bold colors and trompe-l’oeil effects characterize his compositions. It is not uncommon for them to stem from a preoccupation with leading figures in art, as one often feels reminded of Malevich, Mondrian, Palermo or Ryman. These role models are artists whose works thematize the relationship between reality, image and material, in addition to questioning their own means. Grommek's works are clear statements, in which he deals with concrete and minimalist positions, as well as examining art-historical denominations such as original, authorship and authenticity.

On the 5th floor of the museum, Joachim Grommek shall present work complexes, in which the trompe-l’oeil effect comes to the fore. His paintings have a moment of surprise in store, which calls our everyday visual experiences into question: as observers, we perceive precisely defined color fields which appear to be applied to the plain chipboard image carrier in the form of adhesive strips. The initially apparent unfinished state of the paintings prompts closer examination.

The artist uses ochre-colored chipboards, gives them a white undercoat, then paints on them in such a way as to imitate the surface structure of the original board. The illusionistic effect is further enhanced by the fact that the actual texture of the chipboard remains visible at the edge of the painting.

In addition to the paintings, the artist will show room-specific installations which also create uncertainty: no small number of visitors will ask themselves if these are artworks at all, or whether bits and pieces were accidentally left here when the exhibition was being set up. Chipboards lean against the wall, apparently sparsely and fleetingly painted, and yet they too are the result of precisely executed painterly handling.

The state of tension is retained; the contradictions between presentation and reality remain unresolved. Grommek plays with how our perception and our desire for certainty can be mislead.