In her exhibition, Kopelman features three series of drawings and paintings on paper which she produced during visits to scientific expeditions in Malaysia, Panama and Peru. Stefan Burger's project is also an attempt at the artistic representation of a proliferating system. 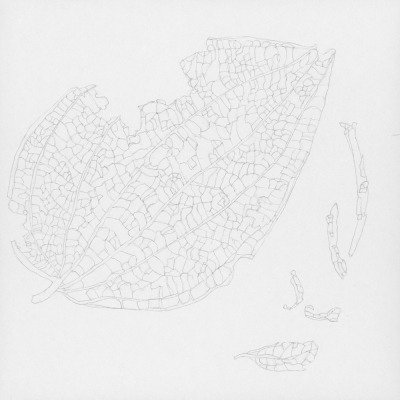 The works of the Amsterdam-based artist Irene Kopelman are the result of intensive research which includes close cooperation with scientists as well as her own fieldwork. In the process she searches for suitable methods to transform certain phenomena into drawings, paintings and sculptures.

In the exhibition «Entanglement» Irene Kopelman is showing three series of delicate drawings and paintings on paper which she produced during visits to scientific expeditions in Malaysia, Panama and Peru. The artist approached the forests there in cautious and very different ways: whereas for the Panama series of drawings, Leaf Litter Traps, she used the outlines of fallen leaves and small twigs which she gathered in nets – the so-called leaf litter traps as laid out by researchers, the diptychs of the Malaysia series (Sampling Greens) show Kopelman’s attempt to capture in colour studies the immeasurable and perhaps infinite varieties of shades of green in the jungle. In the Peru series (The Exact Opposite of Distance) a system ultimately becomes visible which first enabled the artist – overwhelmed by the density and proximity of the jungle – to produce a representation. She created a section with borders made up of crossing lines – such as a tree trunk, a liana or a branch lying on the ground. She then depicts the contents of this “window” in the drawing.

This comprehensive work of Irene Kopelman is being shown at an institution in its entirety for the first time. A publication, produced in cooperation with Roma Publishing, accompanies the exhibition.

Stefan Burger’s project «Caressing an Irritable Colon – The Christoph Schifferli Collection of Ephemera and the Georg A. Hermann Archive as Continuous Flow Systems» is also an attempt at the artistic representation of a proliferating system: the Zurich-based artist, who sometimes uses the ritualised organisational forms of presentation and production conditions of art as a sounding board for his installations, photographs and photo-collages, is showing a continuation and further development of the exhibition «Les éphémeras de Schifferli» curated by Giovanni Carmine at Hard Hat in Geneva in 2012. This was a portrait of the ephemera collection of Christoph Schifferli from Zurich, which concentrates on artist posters, exhibition invitations and other incidental printed matter from the art system.

For Kunst Halle Sankt Gallen Burger is expanding the project with a focussed insight into the archive of the German architect Georg A. Hermann, the central component of which is a photographic archive with pictures of the art world and its protagonists that has grown over decades. Burger transforms the systematic approach of the two collectors on the one hand and the meandering abundance of material on the other into a temporary installative condition.