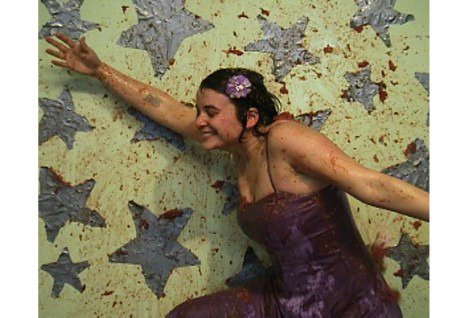 Messy, chaotic, and excessive, Kate Gilmore’s performance-based works show the artist confronting absurd physical challenges. In all of her works, Gilmore wears distinctly feminine attire, including tight floral dresses and high heels. This clothing contrasts with the strenuous activities she undertakes, while also serving to make them more awkward and difficult. At times, Gilmore’s actions appear laughable and doomed to fail. At others, the artist rages in a mode of creative destruction, provoking a complex range of responses, from pity and amusement, to empathy and admiration.

Gilmore offers a contemporary reassessment of both hardcore and feminist performance practices that emerged in the 1960s and 70s, established by artists such as Marina Abramović, Chris Burden, and Carolee Schneemann. These artists also used their bodies to explore physical limits and social norms, often through exposure and endurance. Drawing from this history, Gilmore creates a personal, persistent, and tragi-comic method, using her body as a site to articulate female identity, artistic labor, and resistance.

Body of Work surveys a decade of Gilmore’s forceful output, bringing together five key works on video and a newly commissioned performance, displayed in the gallery as both video and sculptural installation. This new work, Love 'em, Leave 'em (2013), presents a 10-foot tall structure which Gilmore repeatedly climbs, carrying hundreds of vases and pots filled with paint. Dropped from above, the vessels shatter and splatter into a cohesive composition. The clean, white, monumental structure refers to Minimalist forms, while the explosive action and dripping paint allude to Abstract Expressionism. Humorously and destructively engaging these modernist tropes, Gilmore challenges their heroic myths and the gendered stereotypes of art making in general.

Kate Gilmore (1975, Washington, D.C.) lives and works in New York. Exhibitions of her work have been held at the Institute of Contemporary Art, Philadelphia, and Parasol Unit, London. In 2010 she participated in the Whitney Biennial at the Whitney Museum of American Art, New York. Collections holding her work include The Museum of Modern Art, New York; Museum of Fine Arts, Boston; and the Museum of Contemporary Art, Chicago.
SPONSORS

In addition to their solo art practices, Janet Cardiff and George Bures Miller have collaborated on a number of projects that investigate perception and immersive environments. The Paradise Institute is one of their most ambitious and complex works to date, exploring the psychological effects of cinema.

From the outside, the installation’s plywood structure looks plain and unassuming. Inside, however, visitors enter what appears to be a large 1930s-style movie house, complete with plush velvet seating. Seventeen viewers can be seated for each 13-minute screening, with individual sets of headphones that transmit unnerving directional sounds. This highly convincing audio component aims to trigger emotional and physical reactions, which in turn affect visual perception. On screen, a dark and mysterious narrative develops and begins to blend with events taking place in the theatre, building into a dramatic crescendo.

By immersing viewers in a simulated environment, Cardiff and Bures Miller engage both the tradition of realistic trompe l’oeil (“to fool the eye”) painting, and more contemporary illusionistic technologies such as virtual reality. How do we separate our lived experiences and memories from those we absorb from images? Is the boundary between reality and entertainment more flexible than we think? Though it has been over a decade since The Paradise Institute was first exhibited at the Venice Biennale in 2001, in many ways the work is more relevant than ever, as an increasingly screen-based culture draws people deeper into a fragmented, media-saturated existence.

Janet Cardiff (1957, Brussels, Canada) and George Bures Miller (1960, Vegreville, Canada) live and work together in Berlin and Grindrod, Canada. They have been collaborating on multi-media projects since the early 1990s. Solo exhibitions of their work have been held at the National Gallery of Canada, Ottawa; Carnegie Museum of Art, Pittsburgh; and Whitechapel Art Gallery, London. In 2001 they represented Canada at the 49th Venice Biennale, winning the Golden Lion Award for The Paradise Institute.

Please note that The Paradise Institute contains mature themes. Visitors with children under the age of 13 may wish to discuss the content with a gallery attendant, docent, or visitor services team member.

The Paradise Institute is experienced on a first-come, first-served basis. Wait times may vary based on the level of Museum visitation, and seating will be available for those who are unable to stand in line during busy periods. Occasionally, priority will be given to pre-scheduled group tours. These reserved times will be posted on a daily basis in the gallery and on a weekly basis on MOCA Cleveland’s website. Due to the design of The Paradise Institute, the structure may not be accessible for those with limited mobility. Please contact the front desk at 216.421.8671 for more information.

MOCA Cleveland’s presentation of The Paradise Institute has been programmed in collaboration with the Cleveland Museum of Art, which will present Janet Cardiff’s sound installation The Forty Part Motet (2001), May 4–June 9, 2013. As in The Paradise Institute, The Forty Part Motet uses isolated and directed sound to create an uncanny spatial experience.