In Jeff Wall's most renowned black and white photograph a young woman is standing underneath a cheap wooden patio. Here, as with almost all of Wall's works, we are at a frozen moment in a larger narrative. Thomas Bangsted's photographs similarly evolve through a drawn out process, often requiring years to realize single pieces. 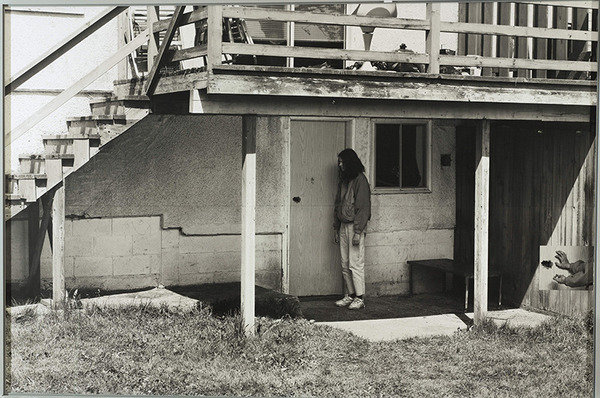 In Jeff Wall’s most renowned black and white photograph, Rear, 304 E. 25 Ave., May 20, 1.14 & 1.17 P.M. (1997), a young woman is standing underneath a cheap wooden patio. Here, as with almost all of Wall’s works, we are at a frozen moment in a larger narrative. The shabbily attired woman stands before the door of a room on the lower level of a lower class abode, seemingly waiting for it to open. Her stance is solemn and depressed. This instant is tucked into the shadow of the architectural construction; Jeff Wall has created a moment of trepidation that arrests the viewer.

Wall begins by first imagining the scene before meticulously recreating the setting for his shot in tightly controlled stagings. The resulting images are deeply personal, with a subject matter derived from real situations eliciting pathos.

Thomas Bangsted's photographs similarly evolve through a drawn out process, often requiring years to realize single pieces. He takes images of places and objects over extended periods of time. In Court (2010-11) the landscape was photographed during the day, while the starry sky is a night exposure. The aim of layering numerous images is to appreciate a new understanding of place – that which we see at any moment is always incomplete.

Last of the Dreadnoughts (2011-12) is the first of a group of Bangsted’s photographs that reinvents the dazzle camouflage schemes used during the two world wars. Abstract paintwork on warships was used by the allied navies to confound the German submarines, not as a means to conceal but to stir confusion with regard to the course, size, speed and direction of the ship. Various artists and designers were enlisted to create these patterns, among them the Vorticist Edward Wadsworth. Negatives of different tonalities, but of the same ship, are collaged together seamlessly. In order to avoid contemporary references, the marine environment is photographed elsewhere. The specific camouflage scheme used in this photograph is based freely on various historical documents as Bangsted does not attempt to depict this specific ship with historical accuracy.

Only a few of these vessels remain today and all have since returned to the standard navy grey/blue. Here Bangsted has given it new life and in so doing comments on the convergence of nature, art, science, war and history.

Thomas Bangsted and Jeff Wall come to their work from opposite sides: the former recrafts a scene reassembling all elements as they once were in time while the latter creates a stage. Both are perfectionists and grand storytellers.

Thomas Bangsted, b. 1976 in Kalundborg, Denmark, studied Photography at Goldsmiths College, London, The Glasgow School of Art, and received his MFA from Yale University, School of Art in 2007. He has had numerous solo shows including at MARC STRAUS (2012), in Denmark at Galleri Tom Christoffersen (2012, 2010) andGalleri Hornbaek (2007).). Group exhibits include The Hudson Valley Center for Contemporary Art (2012), The Bronx Museum of the Arts (2011), Danziger Projects (2010), The Prague Biennial (2009), and the New York Photo Festival (2008).

Jeff Wall b. 1946, Vancouver, British Columbia, studied Art History at the University of British Columbia, Vancouver, and at the Courtauld Institute, London. His work has been exhibited in numerous international exhibitions, including in 2007, a touring solo retrospective at the Museum of Modern Art, New York; The Art Institute of Chicago, and the San Francisco Museum of Art.. He is represented by Marian Goodman Gallery in New York and Johnen Galerie in Berlin.
Copyright © 2013 Marc Straus LLC, All rights reserved.