The Tainted explores the human search for a balance between striving for perfection and the acknowledgment and acceptance of life's limitations. 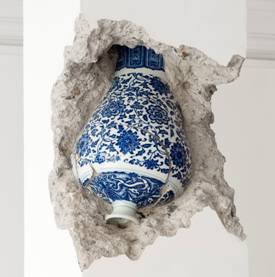 The Tainted: New Works by Shan Hur and Aron Demetz explores the human search for a balance between striving for perfection and the acknowledgment and acceptance of life’s limitations.

A new body of work by Aron Demetz both conceptually and aesthetically highlights the relationship between nature and man, their inter-dependency namely that of man on his surroundings, and the arguable probability of this leading to a sense of dissatisfaction. The viewer is thus encouraged to look inward. Shan Hur’s site-specific installations, on the other hand, create a feeling of disorientation as the viewer is led to question the work and how it relates to the surrounding space. The level of perception is therefore twofold, causing the viewer to not only engage with the work on an internal and personal level but also by looking outward.

For The Tainted, renowned Italian artist Aron Demetz will present a new body of sculptures, which are a continuation of his long-standing fascination with the human figure. Working in wood, Demetz uses this material to highlight both the harmony and conflicts that exist between man and nature. These works are not only a reflection of human emotion but hark back to far more primitive origins of the first interactions between people and their surroundings.

The associations that the artist evokes through the traditional and natural qualities of wood help him to achieve a spirituality rarely seen in this age of digital and synthetic materials. The time that it requires for Demetz to craft each work, working with the natural contours and texture of the wood, is an alien concept in such a fast-paced modern world. This ties into the overarching theme of The Tainted, which explores how long-lasting satisfaction can only be achieved through the gradual overcoming of cravings and anxieties. It prompts the viewer to question the modern attitude to time and the lack of willingness to engage in self-analysis over a long period.

Originating from the Val Gardena in Northern Italy, Demetz has revived the tradition of wood-carving that has flourished in the town since the seventeenth century. The artist has moved away from some of the sentimental and kitsch sculptural scenes that were once widely produced in the region, instead recapturing a spiritual essence in his figures. His work makes an unexpected transition between an age-old material and a contemporary aesthetic, retaining the devotional power that was achieved during the prime of this medium in the Northern Renaissance, whilst bringing about a new vitality. This is partly achieved through his addition of other materials and varying treatment of the surface. By layering silver or aluminium foils or pouring resin over the figures, Demetz has the power to alter the viewer’s perceptions of the human form completely; from an unyielding, metallic façade to the evocation of death and rotting that the discolouration of the resin conjures. His virtuosity and affiliation with his materials has led to comparison with other modern and contemporary artists such as Joseph Beuys, Richard Long and Giuseppe Penone who have also found inspiration in the natural world.

The unique work of Korean artist Shan Hur cases the viewer to doubt and question their perceptions – an emotional response that is crucial to the development of the enlightened self. His works, such as collapsed ruin or cracked column, are put into extremely ordinary spaces found in everyday life. This unusual combination arouses uneasiness in the viewer’s mind, thus, the meaningless and empty space confronting the viewer is instantly transformed into a narrative room that is filled with questions and curiosity.

In particular, Hur exposes and plays with the façade of the exhibition space, transforming it into a site of discovery. Rather than the passive role in which the viewer traditionally observes sculpture within the context of the gallery, here the viewer becomes an active participant, in what seems to be an excavation. Though the participatory aspects of the works are mental rather than physical, they un-cage an inquisitive imagination, evoking memories of the adventures and discoveries made during childhood.

In line with the themes of The Tainted, Hur take inspiration from construction sites as he is fascinated by the moment of transition when a particular space is reconfigured for a new purpose. During this transition the polished veneer of the city is temporarily removed, thereby exposing its farcical nature, and the mechanisms by which this veneer is generated. These scenes act as motives to effectively display contradicting concepts such as uniqueness buried in everyday life, the imperfection hidden inside perfection, or stagnation and change.

Gazelli Art House
Gazelli Art House opened its first permanent gallery space on Dover Street in March 2012 after hosting conceptually interlinked off-site exhibitions across London in 2011. The gallery’s inaugural exhibition was entitled ‘Bodhi’ and consisted of new works by international artists such as Olympia Scarry, Jaume Plensa, Shan Hur and Khanlar Gasimov. In October 2012, the gallery re-opened its original space in Baku, Azerbaijan where it held exhibitions with Azeri artists since 2003. The direction of the gallery changed over the years, and it will now replicate the international focus of its London space by showcasing solely international artists.

As part of Gazelli Art House’s ongoing commitment to art education, the gallery will invite individuals to embark on a journey of understanding art through talks, workshops and tours. As an art organisation they are dedicated to providing a new setting for the understanding and deeper appreciation of art.