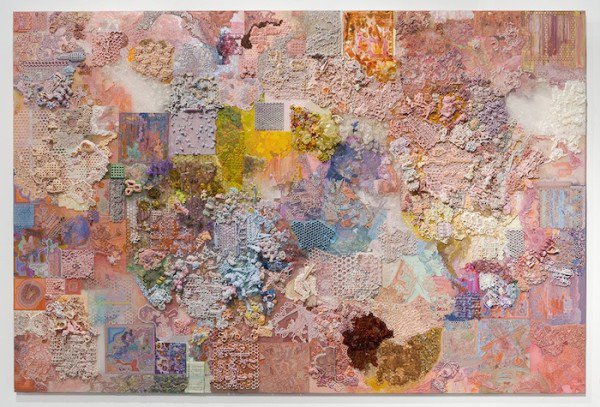 Winkleman Gallery is very pleased to present Nano-Nonobjective-Oriented Ontographs and Qubit-Built Quilts, our third solo exhibition by New York artist Shane Hope. Featuring two series of new work, the exhibition runs March 29 through May 4, 2013. In the gallery project space, we will also present a selection of Hope's "Folk-Computronium Laptops."

Accelerating progress in nanometer-scale science and technology continues to expand the toolkit with which we can eventually assemble things from the atom up. This will potentially give rise to nearly costless systems for controlling the structure of matter itself. In the interim, the 3D printing revolution is said to have already arrived, promising content-to-print solutions and on-demand means of increasingly customizable production.

But molecular manufacturing and 3D printing won't merely make for an end to material scarcity as we know it. These so-called "abundance" technologies will make for objecthoods the likes of which we've not known and maybe can't know this side of some sort of technological singularity (i.e, the theoretical emergence of superintelligence through technological means beyond which events cannot be predicted). It's in anticipation of that reality race that Shane Hope's work starts.

To foreshadow an age of hacking matter, Shane Hope uses molecular modeling research software and crafts custom code to grow generative molecular designs and algorithmically automate alternative representations of nano-scaled structures. With intent to literally convert digital bits back into atoms and properly relate the operative ideologies of 3D-printing to the research and development of theoretical nanofacture, Hope has hand-hobbled together from scratch a number of RepRaps (3D printers) which he uses to materialize (or literally to print) his amassing cache of newfangled nanomolecular models.

The resulting artworks, in series called "Nano-Nonobjective-Oriented Ontographs", “Qubit-Built Quilts”, “Post-Scarcity Percept-Pus Portraits” and “Scriptable-Scalable Species-Tool-Beings,” offer visual art answers to technological singularity blindsightedness; that the future’s futures can’t really be foreseen. How can we hope to depict the runaway imaginings of accelerated artificial intelligences? What will it look like if and after our overclocked-offspring (quicker-thinking posthuman descendants) decide to disassemble everything we know for spare parts?

Forever optimistic, Hope puts forth these pieces as plans for playborground ball pits of pure operationality all about an atomic admin access-privs picturesque. He considers them compendia serving to uncover with repleteness the interobjectivity between nanomolecular unit operations; to abandon anthropocentric narrative coherence; to show how the sum of parts is always actually much greater than the whole; to inscribe object-to-object fault lines of relata distortion on equal ontologically flattened footing with human consciousness; and to display the density how much rather than how little now simultaneously exists like manifold meanwhiles all the way across.

Shane Hope received his MFA from the University of California San Diego in 2002 and has attended the University of California Los Angeles, the San Francisco Art Institute, and the Skowhegan School of Painting and Sculpture. He has exhibited at Virgil de Voldere Gallery in New York; I-20 in New York; Project Gentili, in Prato, Italy; iMAL (interactive Media Art Laboratory) in Brussels, Belgium, Rosamund Felson Gallery in Los Angeles and Susanne Vielmetter Los Angeles Projects. His work will be featured in the Fall 2013 exhibition entitled “Dissident Futures” at the Yerba Buena Center for the Arts in San Francisco.