Once again, the new season will focus on one of the gallery's favorite themes Â­ dealing with aspects of contemporary art Â­ and will include ideas on the process of creating and devising paintings, on distinct individual methods of color application, as well as on unihibited contact to the entire color spectrum. 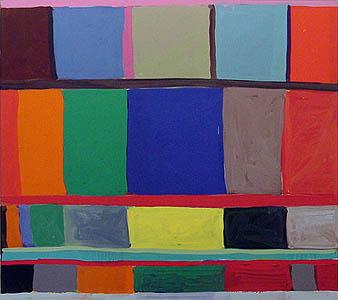 Once again, the new season will focus on one of the gallery's favorite themes Â­ dealing with aspects of contemporary art Â­ and will include ideas on the process of creating and devising paintings, on distinct individual methods of color application, as well as on unihibited contact to the entire color spectrum.

STANLEY WHITNEY
was born in Philadelphia in 1946, lives and works in New York and Rome. Attended courses at Yale University, at Kansas City Art Institute and at Columbus College in Ohio. Numerous exhibits since the 70s, including the Aldrich Museum of Contemporary Art, The Studio Museum Harlem, Jack Tilton Gallery New York, Magazzino dÂ´Arte Moderna Rome, Zerynthia Rome. We first displayed Whitney's art in the exhibit Quiet As It's Kept curated by David Hammons in 2002. A catalogue with texts by Geoffrey Jacques and Raphael Rubinstein was published by the gallery for both exhibits.
The structure of the paintings by Stanley Whitney is radical through its simplicity: rectangular blocks of color are layered on top of oneanother in rows and separated by horizontal ribbons of color. This structure purely serves the purpose of painting, yet at the same time representing communication on a metabolical level. Whitney's art is sumptuous and laconic, its efficiency strangely correlates to the city in which he lives: New York. Not mistakenly, the arrangement and the effect of the many color applications in various shades of green, orange, red, blue, etc. have been compared to the rhythm of jazz, a visual polyrhythm.

ANDREAS REITER RAABE
born in Upper Austria in 1960, lives and works in Vienna, Berlin, and Sydney. Attended courses at the University of Vienna and at the Academy for Applied Arts in Vienna from 1987 to 1992. Extended stays in London, Australia, and Berlin. Important exhibits since the 1990s: Wiener Secession 1993, Salle de Bal Vienna 1994, Sarah Cottier Gallery Sydney 1995, 1999, 2001, 2003, KÃ¼nstlerhaus Bethanien Berlin 1998, Galerie Stadtpark Krems, 9 1/2 Villa Merkel Esslingen, Lafrenz Collection Museum Weserburg Bremen 2000, New Zero DaimlerChryslerContemporary Berlin, Diskursive Malerei MUMOK Vienna 2001, fiedler contemporary Cologne 2002, Landesgalerie im Landesmuseum Linz 2004.
This also constitutes the second exhibit by Andreas Reiter Raabe in the gallery. The catalogue "drippings pools curtains" was published in 2003 with a text by Geoffrey Jacques. Another book is in preparation.
'There is something fragmental about the paintings by Andreas Reiter Raabe.
Layers of color are pushing beyond the edge of the painting urging to leak into the space, thereby facilitating the expansion of paintings into the room, as do his objects, which act as projection surfaces. Dripped across edges, poured across surfaces, or painted onto glass, the color often emits a shining physical sublimity, which lets it appear in representational features. Reflections on the surface highlight the painting free of monumentality and frontality. Therefore, the color interacts with what it surrounds, supports or cushions, so determining it as the subject of its brace.' (quoted from Helene Ulrich)