Gloom. A series of 10 vertical pictures, in b/w, which synthesize several recent incursions of the artist in Brittany, at the invitation of the Centre d'Art et de Recherche GwinZegal. 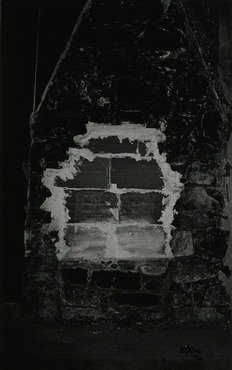 With Gloom, a solo exhibition by Paulo Nozolino, Galeria Quadrado Azul is delighted to open the new space, located at Rua Reinaldo Ferreira, 20-A, in Alvalade, Lisbon.

The show is formed of a series of 10 vertical pictures, in black and white, which synthesize several recent incursions of the artist in Brittany, at the invitation of the Centre d’Art et de Recherche GwinZegal. The word “Gloom” defines a state of mind that can be associated with melancholy, sadness and even with darkness. The photographs now revealed describe a territory left to abandonment, an unfinished project, with no possible solution: it is history interpreted in its catastrophic dimension. Mirrors of the universal decay, these images, from which the human absented himself, describe the state of putrefaction invading everything: a window, a fireplace, an urinal. A reflection on the contemporary emptiness, the new exhibition of Paul Nozolino is also a commentary on the proliferation of images in a society devastated by capital.

On the occasion of the exhibition Gloom by Paulo Nozolino, Paul Cottin, director and founder of the Centre d’Art et de Recherche GwinZegal, will be at Galeria Quadrado Azul to talk about the work of the photographer at the Brittany region. The meeting will have the presence of Paulo Nozolino.

Paulo Nozolino was born in Lisbon, Portugal, in 1955. Lives and works between Lisbon and Paris. He is one of the central figures of contemporary photography. His journey begins in the 70’s in London where he went to live. Then Paris, from the late 80s and throughout the 90s, was the basis for a long series of travels across the Arab World, as well as Europe, after the fall of the Berlin Wall. Books like Penumbra and Solo are good examples of his political concerns with a changing society. He returned to Portugal in 2002, after an anthological exhibition – Nada – at the Maison Européenne de la Photographie in Paris. In 2005, Museu de Serralves, in Porto, invited him to a new anthological – Far Cry – first time ever to show work by a Portuguese photographer.

A frontal artist, Nozolino sees photography the same way he sees life, using it to understand both the world and himself and taking it to the limits of his quest, his answers and his experiences. There is no room for complacency in his work. Destruction means destruction, death means death. Constant cycles in his historical time ‘par excellence’, the Twentieth Century, and even more alive in the present moment, as is stated in his most recent works, bone lonely (Galeria Quadrado Azul, Lisbon/ Atelier des Forges, Rencontres d’Arles, France, 2009), Makulatur (Galeria Quadrado Azul, Lisbon, 2011) and Usura (BES Arte & Finança, Lisbon, 2012).

Public recognition accompanies the artist’s work from the beginning. Awards such as the Villa Médicis (1994), in France, or the Grande Prémio Nacional de Fotografia (2006) and the Prémio Sociedade Portuguesa de Autores (2013), in Portugal, are reflections of such notoriety.