Early Prints from the Collection of the Family. A selection of vintage prints from photojournalistic documents of English society in the 30s to the surrealist nudes of the 50s. 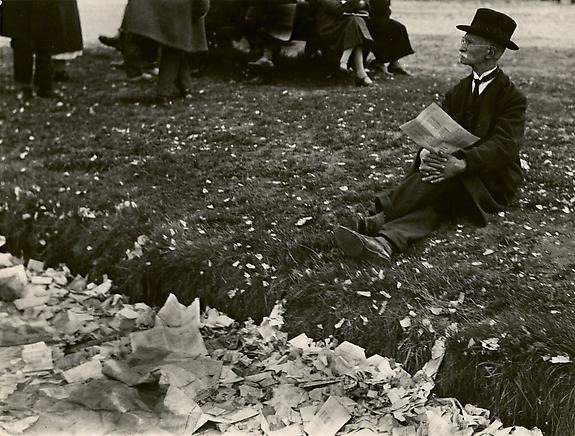 Bill Brandt (British, b. Germany, 1904-1983) is widely acknowledged to be one of the most innovative photographers of the twentieth century, with a professional career spanning over 50 years. Working in a variety of styles and genres – from photojournalistic documents of English society in the 1930s and life in London during World War II, to portraits of England’s artistic elite, and finally to his surrealist and ground breaking nudes of the 1950s – Brandt’s diverse output as a photographer reflected the wide variety of his interests. Consequently, Brandt cannot be reduced to a single style or look. The prints on view will clearly articulate this variety.

This exhibition will present photographs from his family’s collection, many of which will be on view for the first time. It will include prints that explore British society, taken during the time of his first two publications, The English at Home (1936) and A Night in London (1938). Throughout the 1930s and 40s, his photographic dramatizations focused on the vast differences between the social classes and decidedly English types, seen in “Parlourmaid at a Window in Kensington,” 1939, and “Barmaid at the Crooked Billet Tower Hill,” 1939. The strong influence of Brassaï’s “Paris du Nuit” can be felt in his “Soho Bedroom,” 1934.

The journalistic assignments during the War laid the foundation of his subsequent career, with portraits of writers (“Dylan Thomas and his Wife Caitlin, in Their Room, Manresa Road, Chelsea,” 1944), and artists (“Eye Portrait, Henry Moore,” 1960) as well as English landscapes (“Stonehenge under Snow,” 1947). It is in these photographs that Brandt’s shift away from the purely documentary to the more poetic can be keenly felt. A bewildering and beguiling atmosphere permeates, compounded by Brandt’s own reticence. He quietly insisted that the images should speak for themselves.

Finally, in the 1950s, Brandt gained renown as an artist and not just a photographer, with his stunning and unforgettable nudes. The mastery of the female nude has long been considered an important threshold for a photographer, and it’s Brandt’s creative use of shadow, reflection and a wide-angle lens for a dramatic, almost surrealist, perspective that makes his nudes so distinctive and unique. Brandt had done some work in fashion photography in the late 40s, but like Man Ray and Edwin Blumenfeld who before him in Paris had done fashion work, Brandt often had more interest in the model than what she wore. His radical reworking of the genre can be seen in “Belgravia London,” 1953 and “East Sussex Coast,” 1957.

Brandt was born in Germany to an aristocratic British banking family. Suffering from tuberculosis as a teenager, he spent seven years recovering at a Swiss sanatorium. It is there that he first took up photography. As a young man, he lived in Vienna and then in Paris, where he worked in the atelier of Man Ray. Finally, in 1934, he relocated to Britain permanently. Brandt continues to be considered Britain’s greatest photographer of the modern era, and certainly one of the major forces in the elevation of photography as an art form.