And Europe Will Be Stunned. The exhibition features her trilogy films made in Poland between 2007 and 2011. 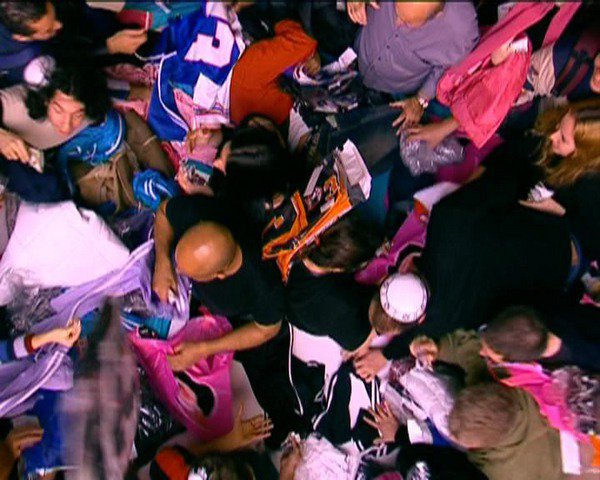 Petzel Gallery is delighted to announce, And Europe Will Be Stunned a solo exhibition by the Israeli artist Yael Bartana. The show, consisting of her trilogy films made in Poland between 2007 and 2011, will run from April 4 through May 4, 2013, with a reception for the artist April 4 from 6 to 8pm. This will be her first exhibition with Petzel Gallery.

And Europe Will Be Stunned revolves around the activities of the Jewish Renaissance Movement in Poland (JRMiP), a utopian political group that calls for the return of 3,300,000 Jews to the land of their forefathers. The trilogy traverses a landscape scarred by the histories of competing nationalisms and militarisms, overflowing with the narratives of the Israeli settlement movement, Zionist dreams, anti-Semitism, the Holocaust and the Palestinian right of return. Apart from realizing the film trilogy, a new political movement has been established by the artist.

In the first film of the trilogy, Mary Koszmary (Nightmares) (2007), a young activist, played by Sławomir Sierakowski (founder and chief editor of Krytyka Polityczna magazine), delivers a speech in the abandoned National Stadium in Warsaw. He urges three million Jews to come back to Poland. Using the structure and sensibility of a World War II propaganda film, Mary Koszmary addresses contemporary anti-Semitism and xenophobia in Poland, the longing for the Jewish past among liberal Polish intellectuals and the Zionist dream of return to Israel.

The second film in the trilogy, 2009's Mur i wieża (Wall and Tower) was made in the Warsaw district of Muranów, where a new kibbutz was erected at actual scale and in the architectural style reminiscent of the 1930’s. This kibbutz, constructed in the center of Warsaw, was an utterly ‘exotic’ structure, even despite its perverse reflection of the history of the location, which had been the Jewish residential area before the war, and then a part of Warsaw Ghetto.

In the film Zamach (Assassination), Bartana brings the dream of multinational community and a brand new Polish society to the ultimate test. The film takes place in a not too distant future during the funeral ceremony of the leader of the Jewish Renaissance Movement in Poland, who has been killed by an unidentified assassin. It is by means of this symbolic death that the myth of the new political movement is unified — a movement which can become a concrete project to be implemented in Poland, Europe, or the Middle East in the days to come.

The combined running time of the three films is 60 minutes.

Yael Bartana (1970, Kfar-Yehezkel, Israel) studied at the Bezalel Academy of Arts and Design, Jerusalem, the School of Visual Arts, New York and the Rijksakademie in Amsterdam. Her solo exhibitions include the Moderna Museet, Malmö ; PS1/MoMA, New York; The Center for Contemporary Art, Tel Aviv; the Kunstverein Hamburg; and most recently at Secession, Vienna. In 2011, she represented Poland for the 54th edition of the Venice Biennial where the trilogy premiered. It has since been exhibited at the Louisiana Museum, Denmark; van Abbe Museum, The Netherlands; Artangel, Ikon Gallery, London; and The Tel Aviv Museum, Israel. Her artworks are included in numerous public collections, including The Museum of Modern Art in New York; The Guggenheim Museum, New York; The Walker Art Center, Minneapolis; the Centre Pompidou, Paris; Tate Modern, London and the Van Abbemuseum, Eindhoven.

Opening reception: April 4 from 6 to 8pm