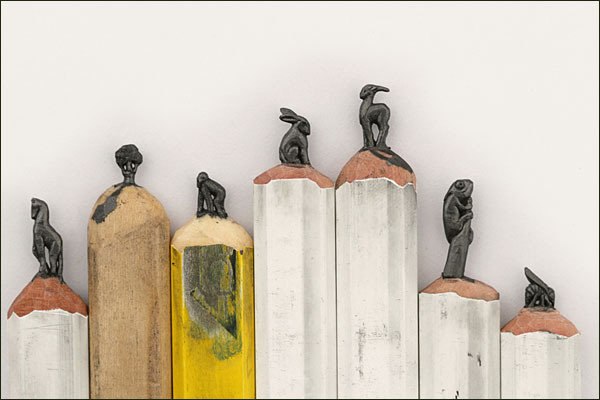 Diem Chau / A - Z: New carved crayons and pencils Coming off the heels of a successful exhibition in Milan, artist and blogger Diem Chau joins us for her second solo with the gallery. Very well known for both her carvings and her fine-line embroideries, Chau always inspires with thoughtful and straightforward stories and ideas. Diem will be pairing a carved letter crayon with a carved image crayon utilizing the whole alphabet. Using the blocky and rectangular carpenter's pencil, she has a small but thick shaft of graphite from which to carve. Working on a series entitled "The Vanishing", Chau addresses issues of extinction by carving various animals none larger than one inchÉBelow is her current artist statement.

"I started my carving in 2005 when I was doing research into folk art and Hobo Art. Hoboes were regarded as traveling laborers with a variety of skills; they often made whimsical carvings with whatever they had at hand. The artwork was simple and heartfelt. I fell in love with its genuine nature; the work is unassuming and approachable, but too often underappreciated. Much like the hoboes of the past, I come from a humble background, our resources were few but our stories are great. I really embrace the idea that art is for all and to reflect this philosophy the mediums I've chosen to use are objects from everyday life."

What causes a bridge to fail? Can the same things cause the collapse of a city, a culture or a belief? For the past several years Carrelli has worked on a series of drawings in which common and often disposable objects share an invented space with more valued and durable structures. He is particularly interested in this relationship between the permanent and the temporary, and in these works seeks to create a conscious interaction between what we make, what we preserve and what we discard. The works in this exhibition extend this exploration to the dialectic of ambition and failure. In juxtaposing images of flood and collapse with subjects ranging from Renaissance furniture to rubber bands, these drawings invite reflection on our cultural aspirations for permanence and the inevitability of decline. They are at root a meditation on both the grandeur and the frailty of human enterprises.

Steven Carrelli received his MFA in Painting from Northwestern University in 1995. As a 1995-96 Fulbright scholar, he studied egg tempera painting in Florence, Italy. Carrelli has returned to Italy on many occasions to teach and to work, most recently living in Florence for 18 months in 2005 and 2006. He lives in Chicago with his wife, the painter Louise LeBourgeois, and he currently teaches at DePaul University and Columbia College Chicago. Carrelli has exhibited his work throughout the United States, and his paintings have been reproduced in a variety of publications, including Art Scene Chicago 2000 and New American Paintings. Awards include grants from the Ruth Chenven Foundation of New York, the Chicago Department of Cultural Affairs and the Union League of Chicago.

Donald Cameron
The Tyranny of Color and Light

Presenting a world animated by ripe phosphorescence, Donald Cameron introduces his third body of paintings and video for Packer Schopf Gallery. For the last decade Cameron has used an inchoate language of beauty to describe various ill-fitting subject matters. Based on a series of small studies made at the Art Biotop residency in Shoudoshima, Japan, these oil paintings are submerged within a painterly application and euphoric use of color, with tangles of rotten crumbling landscapes fragmenting into kaleidoscopic abstraction. The accompanying video work 'Lattice' is an amalgam of demolition footage melting into a continuously free-falling flow of color and form. The breakdown of meaning caused by beauty is an idea central to Cameron's work, as well as skepticism towards the omnipresence of design in society. His inspirations include artists with similar concerns such as Francisco Goya and Jack Goldstein.

Donald Cameron was born and currently works in New York City. Recent solo exhibitions include "Enjoy the Violence" at the Museum of New Art in Pontiac, MI; "Visual Rhetoric and the Aesthetics of Suffering" at Packer Schopf Gallery; and "Bi-Shuu" at MeiPAM Gallery in Shoudoshima, Japan. His work is in the collection of the Cranbrook Museum of Art and the Daimler-Chrysler Corporate Collection among others.