Peje, Kosovo, 1998. The artist created this work during the Kosovo war. Shkololli's naive or infantile forms install a certain degree of discomfort, faced as we are by the patchwork's formal beauty while confronting childlike images of death. 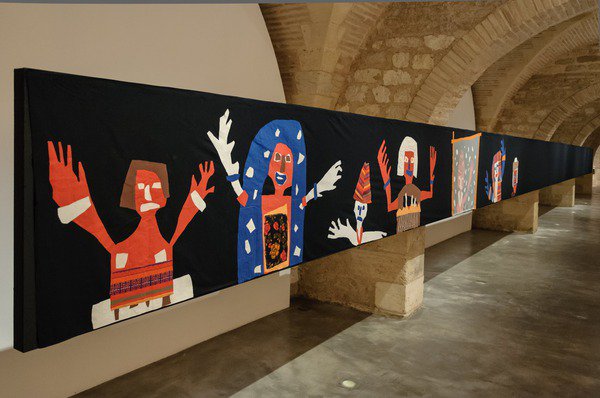 From Saturday 6 April, the Van Abbemuseum presents the work Pejë, Kosovo, 1998 by Erzen Shkololli. Erzen Shkololli created this work during the Kosovo war. Shkololli, then a young artist, was in hiding for three months with his family in Pejë, at the horrific time of ethnic cleansing. In order to keep active, he did what he could under the circumstances with whatever was around—using material from his father's bespoke sewing shop and his mother's home sewing machine. The result was a series of colourful patchworks, one with a length of about 21 meters and eight banners.

Looking at the long banner, genderless red figures jump out at the viewer. Most of the schematically drawn figures have their hands up, interspersed with coffins, houses and flowers all in strong colours on a black background. The figures might seem emotionally flat given the subject matter, devoid of compassion and without depth or perspective, yet this flatness creates a very clear form. Shkololli's naive or infantile forms install a certain degree of discomfort, faced as we are by the patchwork's formal beauty while confronting childlike images of death.

Alongside Shkololli's patchworks, printed postcards in seductive colours are placed on a table. These postcards are some of hundreds painted by children in the refugee camps in the immediate weeks after the war as part of a humanitarian rehabilitation project. Shkololli worked with the children in an attempt to normalise their experiences whilst at the same time coming to terms with his own understanding of what had happened.

Erzen Shkololli (b. 1976; Pejë, Kosovo), is an artist and curator. Currently he is the director of Kosovo National Art Gallery and co-founder of EXIT Contemporary Art Institute in Pejë. Raised in a land of conflict and war, he uses symbolist devices to highlight socio-political conditions.