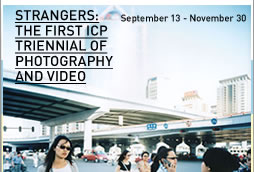 In their introduction to the exhibition, the ICP curators explain how they chose the show's theme:

The title of this first Triennial exhibition, 'Strangers,' reflects in part our recognition of the recent revival of urban street photography, as evident in updatings of the tradition associated with such key predecessors as Robert Frank, Helen Levitt, and Garry Winogrand. At the same time, it signals that the exhibition was largely planned and carried out in the period following September 11, 2001, when the issue of fear and trust among people in public spaces seemed unavoidable.

Simply put, we realized that artists and photographers were increasingly leaving the studio and going out in public, engaging people who were unknown to them as part of their art-making activity. We discovered that artists were consciously considering what it means to confront a "stranger"Ã¦from negotiating to take a picture to engaging a range of ideas having to do with aggression, anonymity, social class, city life, and the cultural and social dislocations of globalization.

Beat Streuli has been commissioned to create a photo installation for the ICP Triennial that will fill the museum's exterior windows. It will consist of large color transparencies that will show anonymous urban pedestrians caught in moments of quiet contemplation. Yet the scale of the images in the 13-foot-tall windows makes each person a momentary star or runway model. By appropriating the look of advertising in both the style and the physical form of the prints, Streuli also comments on the increasing standardization of lifestyles in New York's melting pot and across the global marketplace.

Justine Kurland has spent the past year traveling across the United States and photographing the members of surviving communes, as if she were searching for some lost utopia. These black-and-white images, which bear strong traces of the classic documentary tradition, are portraits of the communal inhabitants posed as they wish to portray themselves

Eyal Sivan will show his film Itsembatsemba, Rwanda, One Genocide Later. An Israeli filmmaker living in France, Sivan brings a special vision to the question of modern genocide. Sivan and collaborator Alexis Cordesse have produced four films in a series called "Populations in Danger." This film explores the way that radio propaganda was used in Rwanda in 1994 to incite the Hutu people to kill their fellow citizens, the Tutsis. During a period of about 100 days, at least 700,000 people were massacred. Sivan and Cordesse visited Rwanda two years after the genocide to take photographs and gather recorded commentary from people trying to recover from the horror they had experienced. Their sequence of black and white still photographs, combined with a powerful sound track, creates a 13-minute narrative that suggests the degree to which the human race can easily slip from civility to barbarism.

Shirin Neshat will exhibit the photographic triptych Tooba Series. Internationally acclaimed for sumptuous film and video installations, Neshat here presents a photo work that grew out of her film Tooba (2002), which was shot in Mexico and premiered at last year's Documenta 11. In this work Neshat flanks a central matriarchal figure with two protective figures of men. The Persian calligraphy on the central figure marks a return to a motif that Neshat used in her earlier photographic series, "Women of Allah" (1993-97).

Rineke Dijkstra will show one of her rare video works, Annameik. Of all Dijkstra's portraits of poignant adolescent transformation, none is quite so heartbreaking as this video. For four painful minutes, the unwavering camera captures young Annamiek's hesitating, lip-sync rendition of the Backstreet Boys' 1996 hit "I Wanna Be With You." The song is a banal collection of clichÃ©s, yet it perfectly captures young love's awkward mix of yearning and assertiveness.

In an interactive CD and a new book published by ICP/Steidl Verlag, photojournalist Susan Meiselas pieces together verbal and visual traces of outsiders' encounters with the Dani, an indigenous people of the West Papuan highlands, during the nearly six decades since their "discovery" by the West. In this subjective, fragmentary history, she draws from the archives of missionaries, colonists, anthropologists, journalists, and modern-day eco-touristsÃ¦outsiders who have come to the Baliem Valley and transformed the conditions under which the Dani live.

Philip-Lorca diCorcia has been instrumental in revitalizing the genre of street photography for a new generation of artists. Beginning with the "Streetwork" series (1993-98) and continuing in "Two Hours" (1999) and "Heads" (2000-01), diCorcia photographed random groups of pedestrians lit by strobe lights that he affixed to store fronts and light posts. The resulting images suggest the impersonal and usually invisible activity that the city itself scripts, and the generic roles its inhabitants enact without knowing it. Many of the images are absent of anecdote, but those in the series "Two Hours," which was shot on one day in the same location in Havana, show a greater degree of interaction between the pedestrians than diCorcia's other such photographs shot in major cities around the globe.

Yoshua Okon will show the three-screen video New DÃ©cor. Using an East Los Angeles furniture store filled with fake TV sets and living room accoutrements as a stage, Okon recruited strangers off the streets to improvise on common soap-opera motifs: "The Love Scene," "The Jealous Girlfriend Scene," "The Painful Break-up Scene," etc. These nonactors swiftly reveal their own relationship to the themes in performances that are both hilarious and moving.

The photo installation The Chain, by Chien-Chi Chang, portrays the residents of Lung Fa Tang, a psychiatric facility in southern Taiwan. In lieu of traditional medications, the supervising Buddhist monks and nuns administer an unorthodox treatment that employs metal chains as therapeutic devices. Two residents are bound together at the waist for the duration of their treatment, by a chain measuring approximately six feet in length. By maintaining this "linked therapy," the temple administrators believe that the more stable patients will lead by example, enabling their partners to approach the edge of sanity.

Krzysztof Wodiczko will exhibit an unusual wearable communications device called Dis-Armor 2. The prototype was developed with support from the Hiroshima City Museum of Contemporary Art, and designed to alleviate the psychological difficulties of some Japanese high school students who suffer from extreme shyness. Demonstrated on a mannequin in this exhibition, the device employs video cameras, LCD screens, and microphones to enable its wearer to communicate with persons standing behind them.

Catalogue
The ICP Triennial will be accompanied by a 248-page paperbound catalogue, published by ICP/Steidl Verlag and distributed by D.A.P. Fully illustrated, it will feature original essays by each of the four curators, a dossier of critical writings exploring the exhibition's central theme, and individual entries on each of the participating artists and their works. For the design of the catalogue, ICP engaged the award-winning Dutch design team COMA (Cornelia Blatter and Marcel Hermans).