Collection of Mudam Luxembourg. Under the theme of utopia, the exhibition consists of thirty works by nineteen artists and two collectives from Mudam collection in various media including intallation, painting, photography, and video. Works by Eija-Liisa Ahtila, Sylvie Blocher, Jesper Just, Wolfgang Tillmans, Franz West and others. 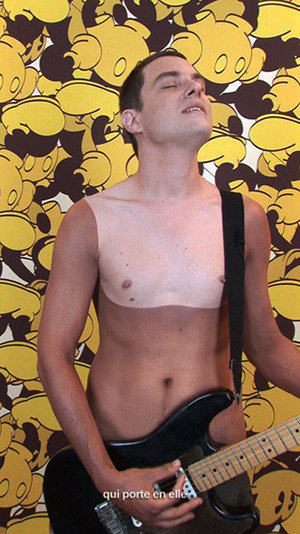 Artsonje Center is pleased to present A More Perfect Day: Collection of Mudam Luxembourg, an exhibition of the collection from Mudam Luxembourg, Musée d'Art Modern Grand-Duc Jean—a contemporary art museum of Europe—from April 13th to June 23rd in 2013. While we encounter moments of hope and optimism as well as doubt and despair in our daily lives, we keep on living, expecting a better tomorrow. Under the theme of utopia, the exhibition consists of thirty works by nineteen artists and two collectives from Mudam collection in various media including intallation, painting, photography, and video. Through the exhibition, we will explore the complexity of life and draw the ideal tomorrow that we dream of.

The title of the exhibition is taken from Sylvie Blocher’s video, A More Perfect Day, which features Barack Obama’s famous autobiographical speech from his first presidentional election campaign performed as a song by the musician, David Bichindaritz. It casts the question of individual identity VS. a more perfect community, or ideal solidarity. The exhibition also presents a neon installation and video projection by Su-Mei Tse, who represented Luxembourg and received the Golden Lion Award at the Venice Biennale in 2003. Other works include: Christoph Büchel’s video projection originally created for Sydney Biennalle 2008, showing rehearsals of a punk song perfomed by senior ladies; African-American artist Kara Walker’s installation Darkytown Rebellion, a theater of silhouette and colours dealing with race, gender, and identity; the 2000 Turner Prize winner, Wolfgang Tillmans’ Rachel Auburn & son and the Bulgarian artist Nedko Solakov’s large-scale installation The Truth (The Earth is Plane, The World is Flat).

On the lounge, Tobias Putrih recreates an installation work, consisting of convertible mobile structures that invite the audience’s participation. As a hybrid of sculpture and furniture, the elements can be assembled to form shelves, chairs and other furniture or configured to suit the available space. Pierre Bismuth screens The Jungle Book Project, an adaptation of the 1967 Disney’s animated classic, in which the characters speak in 19 different languages taken from the different language versions of the original film. Also on view are video works by Antoine Prum and Jean-Louis Schuller.

Mudam Luxembourg is the contemporary art museum whose building is designed by famous architect Ieoh Ming Pei and stands against the vestiges of Fort Thüngen, a historic fortification in Southern Luxembourg City. Since its opening in 2006, Mudam has showcased various contemporary art projects that reflect today’s dynamic art world, and has grown into one of the most important art institutions in Europe. It is dedicated to establishing a collection of contemporary art as well as commissioning, presenting exhibitions, and publishing. Its collection is constantly introduced and explored all around the globe through temporary exhibitions under various themes.

Hosted by Artsonje Center
Supported by Embassy of the Grand Duchy of Luxembourg, Arts Council Korea
Sponsored by Hyosung Corporation
In partnership with Cargolux

To make a reservation for a party of ten or more, please contact press@samuso.org

· Curator's Talk
Enrico Lunghi (Director of Mudam Luxembourg)
* The films are subtitled in Korean. The Talk following the screening will be translated in English and Korean.
* Two films, each by Antoine Prum and Jean-Louis Schuller will be screened once on April 12th, 2013.

In 2005, Antoine Prum represented Luxembourg at the Venice Biennale. For this participation, he presented a film,Mondo Veneziano, High Noon in the Sinking City. The film takes an abandoned Venice as a backdrop and presents itself as a satire of the contemporary art world by staging an encounter between 4 stereotypical protagonists: a convivial artist, a theorist, a painter and a curator. Mutual incomprehension reigns between these 4 characters; Prum’s inspiration is to demonstrate this through citations borrowed from influential texts of contemporary art, and punctuated by scenes of bloody murders explicitly making reference to the gore cinematic genre.
* Please note that the film may contain portrayals of violence and/or other disturbing contents. The film is not suitable for children and viewers with hear disease.
Chungking Dream is a portrait of Chungking Mansions, a vast 1960s complex built in the centre of Hong Kong in the busy district of Tsim Sha Tsui. Although the buildings were originally residential, over the years they have become a place of cheap accommodation, a maze in which freshly arrived immigrants and passing tourists rub shoulders at all hours of the day and night. Fascinated by what he defines as an “organic meta-structure” governed by its own dynamic, the director has captured the diversity and complexity of the innumerable exchanges that animated Chungking Mansions.