Unsupervised. Norris's paintings investigate the interrelationships of form and personhood. Jenkins has created sculptures in the streets and public spaces of cities around the world. On display are a series of collaborative works by the two artists. 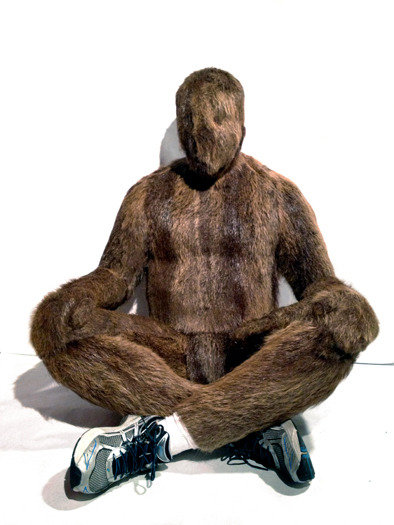 Lombard Freid Gallery is pleased to present Unsupervised, which features new works by Tameka Norris and Mark Jenkins. Both artists’ brash and witty styles draw attention to materials, process, and form, while addressing larger socio-cultural anxieties and concerns. Unsupervised is Norris’s and Jenkins’s first show at the gallery and emphasizes their practices across a breadth of media: painting, sculpture, photography, and video. The opening of Unsupervised also marks the re-inauguration of Lombard Freid’s gallery after the damage of Hurricane Sandy.

Norris’s paintings investigate the interrelationships of form and personhood. Norris mines her past and brings her experiences to the present through the found objects and performative marks she incorporates into her work. Her Contrapposto series—on view for the first time in Unsupervised—evidences the artist’s fascination with gesture and pose. Norris treats each stretcher like a human frame, draping them with sheer and patterned fabrics. These combinations of textiles blur the distinction between states of dress and undress and propose an exploration of the traditions of nudity, voyeurism, and portraiture in the history of painting.

Also on view in the gallery is Lexicon, a collection of twenty-six small paintings, inspired by a collaged alphabet book that Norris made when she was five years old. Each individual canvas incorporates non-traditional materials, complicating the conventional language of painting with objects that contain their own histories. As an installation, Lexicon suggests a linguistic and visual interdependence between childhood, experience, and art-making. Norris’s videos often confront the intersections of art, pop culture, fame, and money and further evidence Norris’s interest in the social factors that inform the construction of personal identity.

Mark Jenkins has created sculptures in the streets and public spaces of cities around the world. He is most known for his cast human figures, built with clear packing tape, often dressed and contorted in uncanny ways. His installations subtly and humorously subvert the expected behaviors of people in the public sphere. Jenkins’s interventions turn urban spaces into a theatre in which passersby unknowingly become both the actors and the audience. His characters—ranging from animals and human babies to anthropomorphized street furniture—create a surrealist cityscape that prompts viewers to re-examine the everyday spaces one would normally take for granted.

For Unsupervised, Jenkins has created a series of Manimals, furred figured created from human casts and found taxidermy animals, that confuse societal boundaries between man and nature, indoors and outdoors, and life and death. Jenkins’s dark humor is embodied in the characters that he invents, and his figures reference man’s failed attempts to unite with a primordial natural past. Who Am I?—a small set of stairs in the center of the gallery, crowned by a mirror—invites the viewer to map the ambiguity of the surrounding figures onto oneself.

Also on display are a series of collaborative works by the two artists: a sculpture that Jenkins made from Norris’s body and a video and series of accompanying photographs that document and underscore the performative process of creating the full-body cast. The photographs and video emphasize a complicated relationship between society and nature, as we watch Norris’s body slowly succumb to the restrictions of the cast around her.

Tameka Norris (b. 1979, Guam) is a New Orleans-based visual and performance artist whose practice investigates identity politics, arts education, and contemporary forms of communication and media. She received an M.F.A. from Yale School of Art in 2012 and was named one of Modern Painters magazine’s 24 Artists to Watch in 2013. Norris’s work has been shown at the Contemporary Arts Museum Houston, in Gifted and Talented (curated by Clifford Owens) at Third Streaming Gallery, New York, and in Prospect New Orleans biennial (curated by Dan Cameron).

Mark Jenkins (b. 1970, Alexandria, VA) is an artist whose street installations have been shown internationally. He has had solo shows in Tokyo, Vienna, New York, Los Angeles, and London, and his work has been shown at Dublin Contemporary 2011, OpenArt 2011 (Örebro, Sweden), Kunsthalle Wien, and the Taubman Museum (Roanoke, VA). Jenkins currently lives and works in Washington, DC.