The Breakup. A ten-part radio series originally commissioned by Al Ma'mal Foundation for Contemporary Art, Jerusalem, in 2010 for a Palestinian station in Ramallah. The project considers the intricacies of The Beatles' 1969 disbanding as an example of a collaboration that grinds to a halt amid unraveling negotiations and failed communication. Rakowitz develops the project into a multifaceted multimedia event. 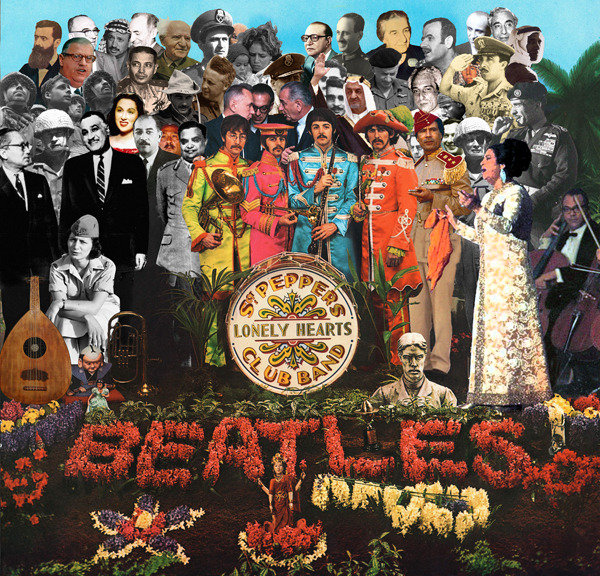 We are standing on a roof, looking down over the ledge from atop a five-story building. It is a northern winter. Cold.

One has to wonder if any of the four men thought to jump, as a curious crowd began to assemble, with bystanders gazing upward…

3 Savile Row. London. January 30th, 1969. The last public appearance of a cultural phenomenon called The Beatles transpired for a brief forty-five minutes during lunch that day. By this time, they had ceased to exist as a unified entity. Indeed, they had over the past three years collapsed and separated into four individuals, each their own nation state: One Paul, one John, one Ringo, one George…

So begins Michael Rakowitz’s The Breakup, a ten-part radio series originally commissioned by Al Ma’mal Foundation for Contemporary Art, Jerusalem, in 2010 for a Palestinian station in Ramallah. The Breakup considers the intricacies of The Beatles’ 1969 disbanding as an example of a collaboration that grinds to a halt amid unraveling negotiations and failed communication. Rakowitz develops the project into a multifaceted multimedia event at Lombard Freid Gallery, New York, featuring video, drawings, memorabilia real and imagined, and a limited-edition gatefold vinyl LP.

Working from a complete set of the 150-hour audio tapes generated during the shooting of Michael Lindsay-Hogg’s documentary Let It Be, Rakowitz created a series of cascading narratives of the rise and fall of The Beatles, pinpointing the precise moment when alienation and isolation gave way to collapse, amid marathon meetings, wheedlings, rehearsals, and conflicts. There were, clearly, allegorical echoes between that collapse and the breakdown of political negotiations in Israel, Palestine, and across a Middle East that once dreamed of uniting under the banner of Pan-Arabism. But there was, oddly, a more direct connection: those 1969 rehearsals were supposed to lead to their first live performance in three years, and Paul McCartney’s dream was for The Beatles to make their triumphant return with a concert in North Africa—amphitheatres in El Jem, Tunisia and Sabratha, Libya were booked. The band ultimately reached an impasse; Ringo and George vetoed the final proposal. The epic concert in the “exotic location” would not materialize, and the compromise was a short and sweet and pathetic rooftop concert one chilly afternoon in London. Disembodied but familiar voices wafted over pedestrians in the street, broadcasted from the same height as church bells or minarets: one final call to prayer for the fanatics down below.

The Breakup culminated in a recreation of that final concert, three decades later, against the backdrop of the Old City and the Dome of the Rock. Members of the celebrated Palestinian band Sabreen—who met at university in the early 1980s and began their career playing Beatles songs at wedding parties, and who had broken up in 2002—came together to perform five Arabic-inflected Beatles songs on the roof of the Swedish Christian Study Centre in Jerusalem.

The songs were selected and ordered to form a kind of poem about collaboration and collapse, and about dreams that cannot be deferred indefinitely.

THE LONG AND WINDING ROAD

DON’T LET ME DOWN

Sabreen’s concert will be available for purchase as a deluxe long-playing record, pressed on sky-blue vinyl, along with extensive liner notes documenting The Breakup’s various iterations. The Breakup was part of The Jerusalem Show IV curated by Jack Persekian at Al Ma’mal Foundation for Contemporary Art, Jerusalem. Live in Jerusalem 2010 is a record produced by Lombard Freid Gallery and Bidoun Projects in collaboration with Al Ma’mal Foundation for Contemporary Art, Jerusalem.