Over thirty works, the exhibition will include many important sculptures from his fifty-year career ranging from some of his earliest surviving mobiles to the monumental pieces made in recent years. Sadly, Lynn Chadwick died during the preparation for this exhibition, in April 2003. 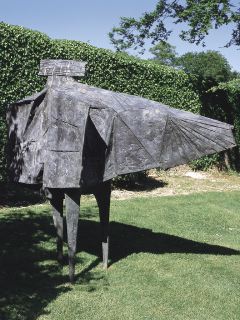 
From September, Tate Britain will show the first London retrospective of the major sculptor Lynn Chadwick (1914-2003). Presented in the central Duveen Galleries and consisting of over thirty works, the exhibition will include many important sculptures from his fifty-year career ranging from some of his earliest surviving mobiles to the monumental pieces made in recent years. Sadly, Lynn Chadwick died during the preparation for this exhibition, in April 2003.

Lynn Chadwick came late to sculpture but he showed two major works at the Festival of Britain in London in 1951 and was launched onto the international stage as one of a new generation of British sculptors shown at the Venice Biennale in 1952. His co-exhibitors included Reg Butler, Bernard Meadows and Eduardo Paolozzi. When he beat Alberto Giacometti to win the International Prize for Sculpture in Venice in 1956 it was the sensation of the Biennale. He went on to secure an international reputation with works in many of the great public collections of Europe, North and South America and Japan. Despite such a reputation, he has until now only had one major retrospective exhibition in Britain.

Chadwick began his working life in an architectâ€™s practice and his independent development of the mobile derived from his experience in exhibition design. These elegant objects demonstrate a sophisticated fusion of sculptural form and engineering. Alongside the mobiles he developed so-called stabiles, one of which was among the most important sculptures at the Festival of Britain. He brought the two elements, static and mobile forms, together in such major works as Fisheater 1951, in which an iron tripod supports counter-balanced arms from which animal-like forms are suspended. In some works, including The Inner Eye 1953, he incorporated chunks of glass into the rough-cut, welded sheet steel forms, investing them with a mysterious and iconic feel.

During the 1950s he developed a new way of working that involved welding an iron armature which was filled with Stolit, an artificial stone compound of gypsum and iron filings. This material provided an evocative, textured surface which would, over time, acquire a rich ferrous colouring. While he retained this working method, he later cast the works in bronze. Bronze dominated his work until the 1990s when he made a number of monumental sculptures in polished steel, two of which will be displayed in Tate Britainâ€™s Sculpture Court.

Throughout his career, Lynn Chadwickâ€™s work drew upon the natural world. His sculptures were largely based on the human figure or animal forms. Though he would insist on the primacy of formal and technical concerns, in both animals and humans he seems to express the fundamental conditions of life. While the animals explore states of aggression and vulnerability and the ambiguity between the two, the later figures examine details of human movement, interaction and sexuality. Chadwickâ€™s work seems archetypal, an aspect amplified by his later use of standard forms for male and female heads.

Chadwickâ€™s was a major contribution to British sculpture that deserves reassessment in this important exhibition. Curated by the distinguished art historian and curator Dr Dennis Farr CBE, co-author of a complete catalogue of Chadwickâ€™s sculpture, the exhibition will be accompanied by a catalogue.